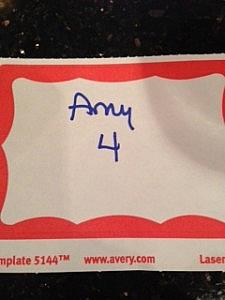 Just back from a quick trip to the Land of Grim the other night and I’m here to report that love, alas, is not waiting for me in a New Jersey strip mall.

My also-single girlfriend and I drove about 40 minutes north of where we live to take part in a round of Speed Dating, which I think one of us had seen advertised on Match.com like a month ago and neither of us needed convincing to sign up.

Now, this is the same woman I’m going to a shooting range with this weekend — and salsa dancing a few months ago — so when we heard about the speed dating, we were like, “Ohhh, let’s try that.” It’s the same way I felt about competing in a triathlon or having a baby (although I stopped at two triathlons).

It’s also the same impulse I have for trying skydiving, and although I’ve yet to jump out of a plane, it’s on my list of terrifying things I might want to try. Maybe, I don’t know. I would kind of like to have that experience in my back pocket to pull out in a conversation, like to be able to casually mention “that time I jumped out of a plane.”

Or stupid. One or the other.

Another factor in my decision to sign up for the speed dating was to satisfy my now-eternal quest for content. I need shit to write about, dudes, or this blog will become the equivalent of a Seinfeld episode. It will be about absolutely nothing.

Case in point: I sat in bed all day last Saturday and read an entire book.

(In case you’re interested, it was an Anne Lamott novel that I don’t necessarily recommend unless you, like me, just finished reading her memoir on writing and then you might find the way she wove bits and pieces of her personal life and advice into her fiction as fascinating as I did.)

And of course, there was also the hope, deep down inside, that the speed dating thing would pan out. There was the “you-never-know” factor at play. People are always telling me their stories about their divorced sister-in-law who met the man of her dreams online or the friend from high school who reconnected with her college love. And I am an avid reader of the New York Times wedding announcements. So, I know love shows up in weird ways and sometimes when you least expect it.

Let me go on the record right now as saying that there is no love going down at a cheesy Italian restaurant in a New Jersey strip mall, the epicenter of all that is grim in this world. It’s just not possible and in retrospect, I don’t even know what made me think that it was worth a shot.

And really, isn’t that what brought all 14 of us there (six men and eight women)? I went with a friend but most everyone else there seemed to show up alone and probably also in hopes that the $28 fee for the event would be the ticket to meeting a special someone.

But love was not in the air for me Tuesday night.

I met some very nice men with whom I had pleasant conversations as they rotated to my table (#4) every eight minutes. It was quite the cast of characters. One of them was definitely somewhere on the spectrum – he was very intense about country music – and I question whether another of the guys fit the 40-54 year old age bracket stipulated for the evening. Plus he was married.

But here’s the thing: for as much as I was thinking none of the men was really my cup of tea, the guys were apparently feeling the same way about me.

You get a sheet to rate everyone throughout the evening and then the event coordinator emails the following day to let you know who was interested along with their emails in case you want to follow up.

Out of the six dudes I chatted with, only two were interested in me. And one was the married guy.

What could this possibly say about me?

Luckily, I’m not too broken up over it. Maybe if there were someone I had really been into, I would have felt differently. I think it’s more kind of funny than sad and should be filed under who-do-I-think-I-am life lessons.

When I got into my friend’s car to drive there Tuesday night, we laughed and said who would of thought when we were busy trying to pick just the right books to read for our mother-daughter book club all those years ago that ten years later we’d be heading off on a speed dating adventure.

Ten years ago, my head was filled with thoughts about redoing my kitchen and what to buy the kids for Christmas. I never imagined myself sitting across from a Staten Island police officer as a potential love interest and having a timed conversation.

But that’s life. You never know what’s waiting for you around the corner.

So what’s the moral of the story? Is there an important takeaway?

For me, it’s that I want to be in the game. I want to experience life. The good and the bad.

In the future, I am just going to try to avoid doing so in strip malls.