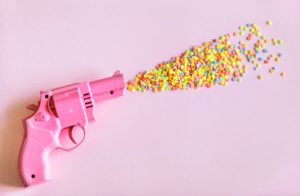 My 16yo son came into my room after 11:00 Sunday night to wake me up and ask whether I heard about the potential shooter threat at his high school the next day.

I’d gone to sleep about an hour earlier, in my new effort to get more sleep (and pretty much overhaul my entire life #again) in the new year, and right before I’d turned out the lights I’d seen a text come in on my Apple Watch as I sat on the toilet. I’d noticed it was from someone on my football mom group text, but here’s the thing about Apple Watches and 52-year-old women: they’re not a natural fit. I was hot to get one for its looks but the reality is that unless I’m wearing reading glasses, which I wasn’t doing sitting on the toilet in the dark to pee before bed, then my old lady eyes can’t read what is happening on the tiny screen.

I could make out that the text said something like, “Did you hear about … “ but that was all I could decipher and I wasn’t curious enough to know more. I thought it had something to do with the imminent departure of the football team’s head coach, and I figured whatever was said could wait until the next day.

Unfortunately, this sound thinking did not prevent me from attempting to scroll through the text on the watch, sitting in the dark on the toilet, with my clumsy ogre fingers and then suddenly realized that I had inadvertently hit one of the emojis you can send in response to a text. Convenient feature, unless you are blind. I cringed.

“Shit,” I thought and hoped for the best as I finished up and got under the covers and listened to the fake waves hitting the fake sand on my sound machine, and drifted off to sleep.

The knock on my door 40 minutes later was jarring and I sat straight up and yelled something crazy and then my poor kid stuck his head in to tell me the news. “Mom,” he said, “have you heard there might be a shooter at school tomorrow?”

That question will wake a person up.

He then went on the tell me how someone had seen a picture posted by a student at his school on SnapChat of a gun and an ominous warning, and that the photo had spread like wildfire on social media and kids were freaking out.

I quickly stumbled to get my phone off my dresser – since my new “sleep better” initiative includes getting it away from my head all night – and saw that it had been blowing up with texts in the football mom thread about the potential danger the next day.

By the time I was aware of the issue, I read that the police had been notified and arrested the kid, a senior at the school, who posted the picture of what looked like an assault weapon – which looked to by lying on a bed – accompanied by the message “Stay tuned.”

After the football moms learned that the kid had been arrested, talk turned to whether he had been part of a bigger plan to attack the school and whether their kids would stay home the next day. A lot of the kids, it seemed, were really upset by the photo and the thought that their school could have been attacked.

Early the next day, while my son ate his oatmeal and I toasted the roll for his ham sandwich to take to school for lunch (this is a full-service operation), messages were still flying about who was and wasn’t going to school and that there would be an early-morning meeting for faculty and staff to report on what had happened. Our basketball coach had indicated at first in a text to the team and parents that he wasn’t going to school, then later that he was but that his son (who’s my son’s buddy) would be staying home. But a little after 6 a.m. I saw on the football mom thread that a board of ed member (and fellow football mom) was sending her son, and that confirmed my own sense that my son would be safe at school that day.

My biggest complaint was that it took police and school officials until late Tuesday morning to issue a press release to disseminate some facts and allay fear. Prior to that, parents had received brief messages from both sources informing us that a threat had been called to their attention and investigated and found to be unwarranted. That morning, I wanted more details, more reassurance, than “unwarranted.”

It turns out, the weapon in the picture was an airsoft gun and from what I gathered in follow up texts from football moms, the kid who posted it was pretty benign. Moms reported that their kids who knew him – who had worked with him at a local restaurant one summer – said he was a nice, quiet boy. That he didn’t seem like the kind of disgruntled kid who would go and shoot up a school. Most moms agreed he’d made a dumb decision, for whatever reason, and had paid a heavy price. We still don’t know what the post meant, if it was directed at the school or if it was just him fooling around on SnapChat and maybe threatening a friend who also has an airsoft rifle. Who knows?

My son had no hesitation going to school and I figured that with all the police swarming the school that morning, it seemed like the best day of the year for him to be there. And also, don’t most school shooters arrive after school has started and blast their way in? That’s kind of how the Columbine attack went down, not to mention Sandy Hook and Parkland. If this boy really had been part of a bigger plan, it seemed to me like the proverbial jig was up after the SnapChat snafu.

It wasn’t until I was sitting on the bleachers with my basketball moms at a game on Tuesday afternoon, that I realized my thinking was not in line with other parents. I overheard two moms talking about the incident and turned around and asked them if their sons had stayed home the day before and they both nodded. When I’d picked my own son up from basketball practice after school on Monday, he immediately reported he was the only kid from our town in his group of friends to go to school that day. I asked about a few kids in particular, whose parents don’t seem to be over-reactors, and he confirmed they had not been in school that day either.

I texted him when I pulled up along the front of the school after basketball practice Monday and watched him emerge from the windowless brick building that is our high school, where a school shooting would not provide many means for a speedy exit, and watched him approach the car wearing shorts and a tshirt under the cold January sky. I’d moved into the copilot seat so he could drive home, something I’d promised earlier in the day. He’d just completed the 6 hours of driving needed to get your permit here in New Jersey, and I’d told him (in a moment of deep love earlier in the day, which I deeply regretted at pick up) that he could take the wheel and drive me home after school.

If you want to know what I think is a much more imminent threat to my own safety, and I guess his as well, it is sitting helpless next to a 16yo learning to drive (it was just his third time behind the wheel). In fact, if you were to chart my heart rate over the 24-hour period between when I heard about the potential for gun violence at our school and letting my kid drive me home, I can guarantee – based on the amount my armpits sweat during that 5-minute drive home – that the ride was way more harrowing.

Apparently, according to my children, my stress level while they are driving is over the top and unnatural. They’d even warned their youngest brother to expect me to be white knuckling alongside him as he drove. Apparently, their father is a much more relaxed passenger.

It always surprises me when my thinking is not in sync with the majority. I was just as surprised to learn that so many of my son’s classmates stayed home on Monday as that other parents don’t grip the door handle for dear life when their teenager is at the wheel. And I think that if I had been a younger mom, I would have worried about being judged about sending my son to school that day.

Maybe the most troubling part of this whole story (other than my son having to see me stagger around in the dark in my underpants searching for my phone) is that this is the world we are now living in. Where we see a picture of a gun and ambiguous message and fear for our children’s lives. And the only thing we can do about it is keep our children close, because no one else is doing anything about it.

We do nothing to place any real limits on who gets to have a gun and just what type of firearm they can get.

This is the new normal.

And that really is so much scarier than sitting next to a teenager learning how to drive.

I know, things can seem scary. And frustrating. At least we’re not alone. Sign up below to get my recent posts, delivered straight to your inbox. That’s not scary at all.