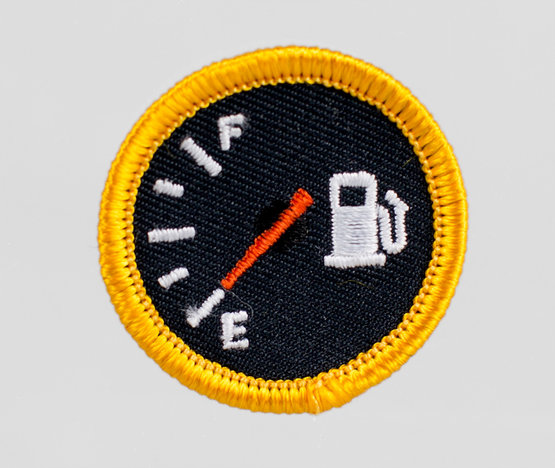 Have you ever wondered what happens when your car runs out of gas?

As of this weekend, I have run out of gas four times. Don’t you feel good about yourself now? You’re welcome, America.

Really, I’d like to blame Sheila, my one-year-old Subaru Outback. She’s done it to me twice so far. I’d like to say it’s because I can’t get a handle on what her Low-Fuel alerts mean. Like, just how serious is she? Because the messages that pop up seem pretty casual. Kind of like, “You might want to think about getting gas at some point.” Not: “I’M GOING TO STRAIGHT-UP STOP RUNNING IF YOU DON’T PULL OVER IMMEDIATELY TO REFUEL.”

I guess I need those kids of messages. The procrastinator in me processes most warnings as suggestions unless shouted or WRITTEN IN ALL CAPS.

The first time I ran out of gas, I had a couple of kids in the car with me and was racing home from an activity when the car just pooped out. My son, a teenager at the time, was so disgusted that he got out of the car and walked home while I waited for a non-judgmental friend to come with some gas in a can.

The second time I ran out of gas, I wasn’t even driving the car. My girlfriend came over before we were heading out for the night and she took my car (for some reason, I can’t remember why) to go to grab a birthday card at the CVS and called me to say the car had died and I ran out to fetch gas and get it going again. I’m sure she wanted to punch me in the face.

So, here’s what happened this weekend:

I had about a 3.5 hour drive north on Saturday for a lovely wedding in Saratoga, NY. I filled up my gas tank, plugged the hotel into my GPS, downloaded an audio book and was on my way. For my return on Sunday, I assessed my fuel level and it seemed like I’d just make it home with what was left. I drove home listening to my book and eating a delicious almond croissant while keeping an eye on the needle as it slowly moved towards E. At one point, I even pulled off into a gas station on Route 17 in North Jersey, a stretch of highway littered with gas stations, to think about driving by the house I grew up in, decided against it and got back on the road. The gas seemed expensive and I had a bee in my bonnet for filling up when I went to Costco later.

In fact, as I rounded the corner onto my street, I was still wondering whether I could bypass the local gas station (pricey!) and make it to Costco, when I felt Sheila kind of shudder. If I hadn’t known any better, I would have thought I’d accidentally shifted into one of those weird gears that are on the car that I don’t really know what to do with.

But as an expert in the field of running-out-of-gassery, I knew immediately what was happening and began trying to pull over to the curb, which is where Sheila pooped out, about 5 houses away from my own, which was honestly really considerate of her. Except I really had to go to the bathroom from all the coffee I drank with my croissant and my feet were killing me from all the dancing the night before.

Luckily, knowing it was only a matter of time before it happened again, I’d picked up one of those red plastic gas cans a few months ago, which I grabbed out of the shed and had my daughter drive me to the local gas station, where a gallon of gas was 10-cents more expensive than the station I pulled into up north. And my hands smelled like gasoline for the rest of the day.

So, that’s pretty much it in a nutshell. Sheila’s back up and running but I do think she is gently trying to send me a message. The last time she ran out of gas was literally in my driveway. I jumped into her to get to work one morning and she was like, “I don’t think so.” But I think Sheila’s onto me. I think the next time I forget to feed her, she’s going to have to teach me a lesson and stop running, like, on a highway or something.

Honestly, I wouldn’t blame her. She’s had enough of my baloney. I’m sure if she could talk, she’d tell me to get it together. Unlike my children, Sheila still has hope that I might change. Now, my kids don’t even flinch when I call and say, “I ran out of gas.”

I help readers feel better about themselves by sharing stories of my eternal struggles as a human. You are welcome. Sign up for my latest posts that are sent right to your inbox by typing your email into the box below. You can also follow me on Facebook, Twitter and Instagram.

8 thoughts on “Running Out of Gas (Literally)”