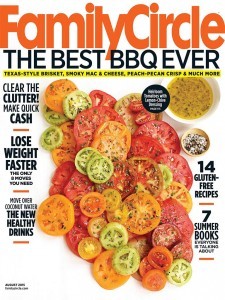 Last Friday, I was getting ready to leave my house for a midday meeting when a text popped up on my phone.

“Your famous,” it read and was accompanied by a picture of the cover of Family Circle magazine and another of an article with the headline in big, red lettering “PHOTO FINISH.”

I was so caught off guard that I responded, “I don’t think it’s this month is it?”

My brain could not compute anything I was looking at.

I had known for some time that it was coming but I didn’t expect to see it for another month.

Last August I submitted a piece, almost as an afterthought, to Scary Mommy. I was getting ready to ship my oldest two kids off to college and it occurred to me that other moms and dads might be getting ready to do the same thing, and was reminded that I had actually written about that experience a couple of years earlier on my blog. I heard right back from Samantha from Scary Mommy and the piece was put up on the site pretty quickly because of the timing and it was called “The College Good-Bye.”

And it got great feedback from the SM community. Lots of nice comments. Shares. Tweets. All that good social media stuff. I was pretty content with the process.

And then it happened.

I don’t really check my blog email account like I do my regular Amy Byrnes Gmail account. I just don’t get a ton of messages other than new posts of all the blogs I follow. So a few days after I posted the Scary Mommy piece, I clicked on my blog’s inbox while standing at my kitchen island thinking about what to cook for dinner.

A name that I’d never seen before popped up with “The College Good-Bye” in the subject line and when I clicked and started reading the message I had to stop and step away from my laptop before I could finish the message.

And then I started to scream.

The note was from the articles editor at Family Circle magazine who said complimentary things about the essay she read on Scary Mommy and wondered whether I would consider selling it to the magazine.

Are you fucking kidding?

The kids and I hooted and hollered and ran around the kitchen before I could settle down and very calmly respond to the email and say, “Why of course, I’d be happy to have my writing featured in a national magazine.” I mean, they sell that thing at Target.

The downside was that because print publications have such a long lead time, usually a few months, Family Circle was interested in publishing my essay the following summer. Like, a year later. For someone like me, who seeks immediate gratification in most things, this was a serious test in not only patience but also in keeping my mouth shut. I really didn’t want to curse it.

So I waited and waited. I tried to stay in touch with my contact, just so she wouldn’t forget who I was. The holidays came and went and communication tapered off. She had a lot going on in her life and what sounded like a demanding job and probably didn’t have time for hand holding. So I just quietly wrung my own hands at home in New Jersey and stared at my laptop and waited.

And then that voice inside my head, you know that asshole who’s always telling me what a loser I am, started to speak. “They found someone better,” it hissed. “Did you really think it would happen?”

That bitch kept on whispering terrible things up until the point that I really started to believe her. I had pretty much resigned myself to the fact that Family Circle had come to its senses. I made my way through all five stages of grief: denial, anger, bargaining and depression and just when I had made my peace with the loss through acceptance, I got an email from my Family Circle contact telling me to expect a contract in my mailbox.

And then things moved quickly. I signed documents and mailed them back. I looked at some cuts and edits that had been made to my story and noted in my approval that the changes only made the story stronger. And then one day, a check for real money for my writing appeared in my mailbox.

And then it was time to wait some more.

Because even though I had received payment and cashed the check and everything, it still didn’t seem very real. I still didn’t want to jinx it.

I sat quietly and waited for the essay to appear in what I thought would be the September issue, which would hit newsstands in August. I grew up devoted to Seventeen magazine’s annual September issue, a giant tome featuring tall girls in perfectly feathered hair wearing courduroy pants with vests and ties that I longed to own even though I wore a Catholic school uniform every day. So to me, back-to-school is naturally in the September issue of a magazine.

And then the text from my girlfriend who stumbled upon the piece in the August issue of Family Circle while on vacation with her family in Cape Cod came and I realized it was really happening.

But I still needed to see the actual magazine with my own eyes. I needed proof.

I raced around town before that meeting last Friday trying to track it down. My daughter and I spread out and hit four different supermarkets and pharmacies and nobody had the issue out yet. I went to the meeting and on the way home, stopped at a local market to pick up some burgers and corn on the cob for dinner and on the way to the register, I stopped to scan the magazine rack and there it was. And it’s a beauty, too, that August cover.

I tore one open to its Table of Contents and easily found what I was looking for. I thumbed to the middle of the magazine and there it was, my work, my writing, just hanging out on Page 88. It was a beautiful thing. 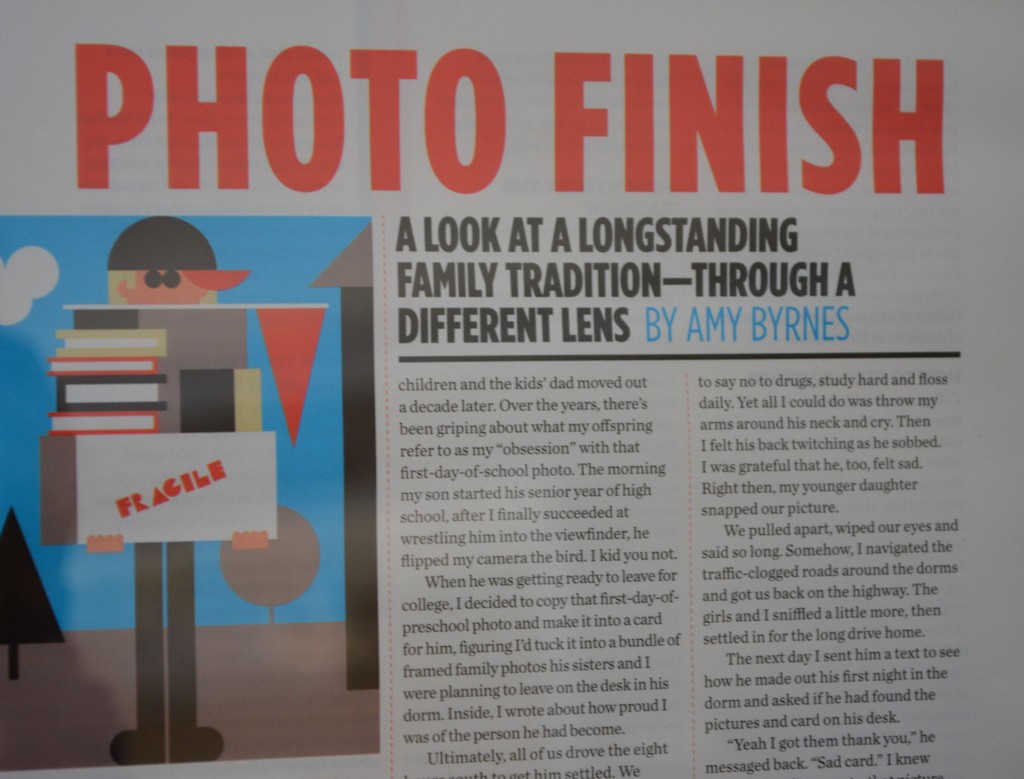 I pulled four issues into my basket and headed to the checkout and started chatting with the gal ringing me up. She got to the pile of magazines and asked, “What, are you in it or something?” And I couldn’t get the giant grin off my face as I nodded my head. She seemed interested so I gave her some background on what had happened and quickly opened to Page 88 to show her my name in big blue print at the top of the page. She oohed and aahed along with the young checkout gal next to her who, it turns out, is an English major in college and would like to someday write.

I gave her my business card and told her to email me if she ever had questions or needed advice and headed home with my corn and pile of magazines. But I won’t lie, every time I see my name in the magazine, I can’t help but smile. It is incredibly satisfying to see the result of five years of really hard work.

I can’t wait to see what happens in the next five years.

43 thoughts on “Read Me in the August Issue of Family Circle !”