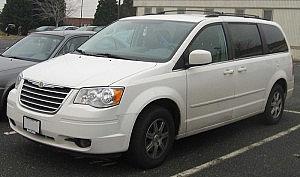 You might have read here that I am on a quest to bring the minivan back.

I’ve been rocking my Town & Country rental all week.

Since I started driving my shiny white beauty following a little run-in with a tractor-trailer, I’ve started thinking a lot about – given all the vehicle’s bells and whistles, not to mention roominess – why so many of us parents insist on driving around the suburbs in big rigs.

It’s got me wondering why we need to define ourselves by the vehicles that we drive and resist being labeled by who and what we really are – moms and dads who spend a fair amount of time hauling kids to school and soccer and the mall.

It’s fascinating that we need to pretend that we are something that we’re not – like a cowboy, maybe, or a contractor— because that’s who should be driving vehicles with a two-ton tow capacity and four-wheel drive.

Why is the SUV cooler, presumably, than the minivan? And why does it matter?

For years I hauled my guys around in a giant Chevy Suburban and while I really loved it and could parallel park that thing like it was a VW Bug, it was a pain in the ass. It ate gas, you had to hoist baby seats up and in because it was so high off the ground, and the extent of any parental conveniences was maybe five cupholders.  My first Suburban even had the back door that swung open off to the side, not even straight up so you had to make sure the coast was clear before you released the hounds, so to speak.

Minivans are just chock-full-of conveniences for parents, with magic sliding doors and a deep well in the way back to hold $200 worth of groceries and prevent anything from falling out when the door is opened. And if yours is full of a few months’ worth of The New York Times neatly bundled, as is mine, you can STILL load all your groceries on top, as I did yesterday.

I think if Cadillac or Audi made a van, they’d fly out the door.

Over the years, I’ve logged a fair amount of time sitting on my therapist’s couch and talking about why I worried about what others thought of me. Why I needed to feel validated by how I thought things looked to the outside world. It was how I measured my self-worth.

It wasn’t until I started worrying about what was going on underneath the shiny exterior that things started to change.

And it lets me sit next to the other mom driving a Land Rover in the next lane, presumably on her way to a safari, at a red light and not feel weirdly less.

I’ve become much more concerned about what I think of me rather than what others think of me and while it’s not totally perfect – I still struggle with my vanity and ego – it’s a work in progress.

I was watching Kelly and Michael this week (I haven’t even mentioned how OBSESSED I am with Kelly Ripa) and heard them talking about a recent survey about what ladies consider the sexiest cars for men to drive and the pickup truck was at the top of the list.

Michael joked that the minivan was probably the least sexy vehicle for a dude to drive.

“I don’t know,” said Kelly, wearing some adorable outfit. “I see those guys driving around a whole bunch of kids and think that they’re obviously sexy to somebody.”

When I was younger, it was the glitter of the outer shell that really caught my attention. “OOOOh, shiny,” I’d think, mesmerized by all the flash.

But now I know better.

Now, I know you need to pop open the hood and  make sure everything is running smoothly underneath. I know now that I like things that make my life easier rather than putting up with shortcomings because of how something looks.

I’d rather have solid and dependable — with good highway mpg — than zero to 60 in a heartbeat.

Because sexy is fun but reliability and practicality are better suited for the long haul.

7 thoughts on “Putting the Sexy Back in Minivans”