Both of my daughters told me at different times last night, after the Thanksgiving remains had been boxed and bagged on shelves in the frig and every spoon and pot lid had been washed and left to dry, that it had been a better day than they had expected.

“Because you were much calmer than you usually are when we have people over,” said one girl.

“You didn’t act like a freak,” observed the other.

I’d offered to host Thanksgiving for my family this year, willingly and despite the fact that I’m preparing to move in the next month and that I just had the good fortune to return from a trip to Disney World with my 12yo son a few days before. So, I knew what I was getting into and the challenge going into it was how was I going to keep it all in perspective?

Historically, this is how I acted before any event I hosted:

When I was still married, I’d make my husband crazy as I tried to channel Martha Stewart in the linoleum-lined kitchen of our first house, barking orders at him while I baked and broiled and slathered things in tapenades and aioli and actively ignored the needs of any infants or toddlers living under our roof.

Things didn’t really improve after I got divorced as I just transferred all that pre-party rage onto my children. Somehow, at the end of the night after all the guests had gone home, no one ever concurred with my assessment that all the crazy had been worth it. It seemed anyone who’d lived through my entertaining mania would much rather have been locked in solitary confinement or water boarded than forced to withstand my verbal flagellations.

But I am tired of trying to pretend to be perfect and apparently, after reading all the reactions to that zany video I posted on Facebook, I haven’t been the only one trying to make people think that we don’t sit on our sofas or sleep in our beds or generally live in our house. So many women saw themselves in that crazy Gayle character as she raced around her house with a vacuum barking that she wanted to have the place “looking like Disney on Ice in one minute.” We saw how ridiculous we were.

I mean, it was just my family coming to dinner; my mom, a few siblings and their families. Did I really need to impress them with elaborate desserts and centerpieces? Did I really care about finding the perfect sweet potato recipe that would complete their meal?

In the end, I let go of everything. Instead of making every last dish on the table, I delegated much of the cooking. I set the kids’ table up in the den that is now lined with moving boxes filled with the books that used to line the shelves. I ignored the fairly large dust bunny that remained behind the powder room door even after my oldest son vacuumed the entire first floor. And when, just as my brother was preparing to carve the turkey, I discovered I’d forgotten to take the stuffing out of the frig to heat for dinner, I simply threw into the microwave to heat and broiled in the oven to crisp up the top. It wasn’t perfect but it got the job done. Oh, and we didn’t even have sweet potatoes on the menu this year.

As many of you who stop by here know, I super-love the writer Elizabeth Gilbert. I can’t get enough of her thoughts and voice. And I’m reminded this post-Thanksgiving morning of her pronouncement that “done is better than good.” Sometimes we get so snagged by trying to be perfect that we’re prevented from doing anything at all. Or, I’d like to add, we focus on stuffing and dust bunnies and not the stuff that really matters. 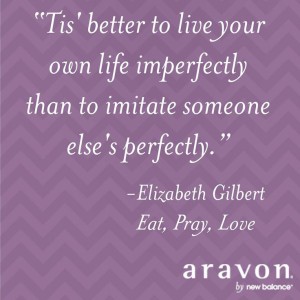 Instead, yesterday I enjoyed sneaking my two nieces some shiny chocolate coins I’d set out in my fanciest china bowls on the kids’ table for them to nibble before dinner. I watched as my four children took turns holding their two-month old cousin and then marveled as my oldest son cradled the baby in his arms and cooed and made faces that brought a big, dimple-cheeked smile to the baby’s face. And when the meal was over and I could not shovel one more forkful of mashed potatoes into my face, I sat and enjoyed chatting with my family instead of jumping up and clearing the dishes from the table.

And when two of my siblings, whose appetites I’d taken into consideration when I ordered my giant bird, failed to show up for the meal without a call or a text, I let that go, too. In the end, I’m sorry they missed such a nice afternoon surrounded by our family.

I asked my friend Dan – you know, that Girl-Whisperer guy – what his favorite part of Thanksgiving was as we worked out the other day and instead of the turkey or a certain pie, he told me he was looking forward to the prayer before the meal he would serve at his house. He’s been through a lot this year, like radiation and chemo and kind of dying, and said he had a lot to be thankful for and was going to write something to share before the meal with his family. He wanted them to know how much they meant to him.

I thought about that prayer a lot, too, while getting ready to host my own Thanksgiving feast. I thought about how lucky I was to have all that I do, like my family and my health and the means to afford a heritage turkey that had been hand-fed golden corn kernels and some gourmet gravy to go along with him.

Now I only hope I bring the same zen approach to my upcoming move because the pile of boxes in my garage make my heart race a little bit every time I walk past them to get to my car. I’ll just need to get that done, too.

4 thoughts on “Post-Thanksgiving Thanks”