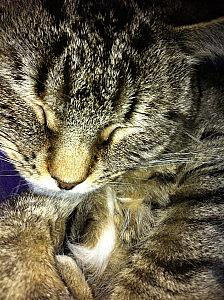 Because even though I’ve been a reluctant cat owner for, like, four years or something, I still haven’t been able to get a handle on all the poop she makes and just the whole kitty litter box thing in general.

And right now, it’s become my fucking problem since her real mother—my oldest daughter who carried on about keeping it when we found the half-dead cat in our garage one snowy night—is away at school, leaving me to deal with the little turds that pile up in a plastic box on a daily basis in our upstairs bathroom.

And then there’s all the litter she kicks up onto the tiled floor after she’s done her business. One of my kids actually refuses to use that bathroom – dubbed the “kids’ bathroom” – because of the specks of grey litter scattered across the floor, and uses my bathroom instead.

In fact, since the litter box was set up in the kids’ bathroom a few years ago, no one really uses that latrine any more. I often come upstairs to use my own bathroom to find the door locked, Z100 blaring on the portable radio next to the sink while my 11 year old stands in the shower for 20 minutes before exiting sans soap or shampoo and leaving a towel on the floor in his wake.

And then there’s my concern about all that weird dust that gets stirred up while I’m scooping things out of said plastic box. The lavender-scented dust floats in the air right in front of my face, which I thus inhale, and I am convinced the matter will be the cause a decade from now of my mesothelioma diagnosis.

How can this be good for my lungs?

What I’d like to know is: how do people have more than one cat?  I can’t even imagine the type of waste maintenance involved in such an endeavor. One of my daughter’s friends recently mentioned his family had four cats and all I could think was, “How does that even work?” I can’t even go there.

I didn’t really grow up with cats, I mean, my mom had acquired one while I was away at college, but I was never involved in any of her upkeep and so still don’t really feel like I know what I’m doing with mine.

But I am no stranger to poop.

Cleaning the litter box is a good reminder of my desire to get off the waste management crew around here for a while. Between the four kids, two now-gone large dogs and the ever-present kitty cat, I have been dealing with other creatures’ poop for two decades. Oh, and let’s not forget the guinea pig, mice, numerous fish and two hermit crabs I’ve cleaned up after – or yelled at people to clean up after – along the way. (Wait, do hermit crabs poop? I don’t remember.)

My ex-husband actually dealt with a lot of the dog poop over the years, so I have to give him that. He’d dutifully walk our first dog to the dog park in Hoboken early in the morning and again after work to do his business and later, he’d go out into the backyard to pick up all the giant piles left by our giant dog.

He also helped out with our kids’ poop management but I probably handled the bulk of the diaper changing. The accidental poops in big boy and girl panties. The poops I’d find floating in the tub after my toddler would sit down and the water acted like a giant enema, freeing waste from little bowels.

When my ex moved out, our golden retriever Rudy was so traumatized by the split he started bypassing the backyard and just pooping on the family room carpet. Super, totally disgusting. The vet actually suggested putting the guy on anti-depressants to help him cope.

Please, I was upset, too, but you didn’t see me pooping on his dog bed. Then again, dogs can’t drink wine.

Aside from the fact that he pooped, that golden was a pretty amazing dog and I miss having him constantly underfoot. At the time though, it drove me crazy when I found all 90 pounds of him stuffed under my desk while I worked or jammed under the kitchen stool while I drank my morning coffee. But he made for excellent company and only needed a scratch on the head in return for his allegiance. 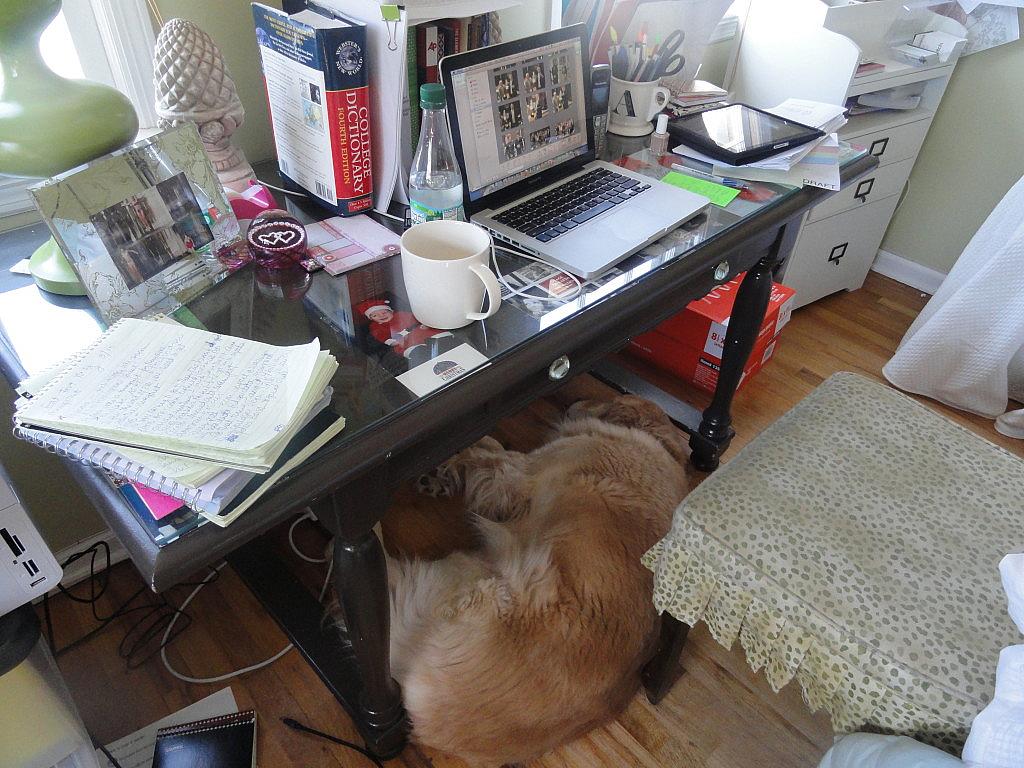 Rudy would shove himself under my desk while I worked rather than stretching out on his giant bed about five feet away.

It gets tempting when I hear that someone just got a new puppy or see some sad Facebook post about a mutt looking for a forever home, but then I remember all the poop and hold my ground.

I went out with a girlfriend Saturday night who I spent many mornings with walking through wooded trails or along sandy beachfronts while our two dogs raced joyously ahead, free of leashes and fences. They’d always loop back around to check in with us, looking up with great big smiles on their furry faces before taking off again through the brush.

My girlfriend lost her guy not long ago and already has a new dog – albeit an old rescue mutt – to keep her company. “I can’t believe you haven’t gotten another dog,” she said to me over glasses of Chardonnay.

She may not be the most playful creature and her idea of hanging out consists of sitting five feet away and staring at me, but my cat somehow fills the void left when we had to put Rudy down almost two years ago. She’s not exactly fun but I get a kick out of her and she’s enough of a pet right now.

And at least her poops are a lot smaller.