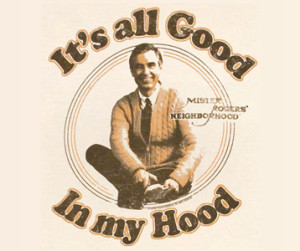 I was standing in the kitchen talking to my 17yo daughter this weekend when I noticed her looking over my shoulder. This is nothing unusual. Nobody really pays any attention to what I have to say around here unless it’s what I’m making for dinner or that I don’t have $300 lying around to help fund a spring break trip to the Keys.

Anyway, I was probably saying something like, “Do you think you’re going to college next year?” or “If you don’t clean your pigsty of a room you’re not going out tonight” when she shouted, “Look what’s inside that tree!”

She pointed out the window over our kitchen sink to a giant maple tree in our neighbor’s yard, right on the other side of the chain link fence that separates our properties. Its trunk splits into two like a “V” as it reaches up towards the sky and then each half splits again. About 20 feet up, the whole shebang starts bending towards my house so all the limbs, branches, twigs create a canopy over my narrow back yard. It actually used to have a sister tree about 10 feet to its north, also right at the edge of the fence, and the two of them had been the bane of my existence since I moved into this house over a dozen years ago.

It turns out, maple trees generate a variety of little pieces of crap that they drop throughout the year — you know, those helicopter things we used to call “Pinnochio noses” when we were kids that fall in late summer, and bright green blossoms in the spring. And then there are all the leaves. And all of it — the buds, the leaves, the helicopters and all that ensuing pollen — float right into the swimming pool that takes up about half of my backyard.

I really wanted that pool when we were trying to buy the house. I really thought it was going to be so great to have it for the kids to swim and play and invite their friends over and our friends over. But I have learned after taking care of the 30-year-old thing over the last 12 years that swimming pools should be filed under “Things That Seemed Like a Good Idea at the Time.”

Ironically, the tree closest to the pool came crashing into our back yard the night Hurricane Sandy blew through, its giant limbs tearing through the dark green pool cover that had just been pulled on top a month earlier. The power had already gone off when the tree fell but the wind and everything going on outside created such a racket, we never even heard it come down. We eventually noticed the branches, which earlier that day were 40 feet above our yard, lying on the steps outside our back door later that night.

Now, the remaining maple tree is not looking in much better condition than the other one did before it keeled over. A pretty big limb fell off a few years ago, leaving it looking a bit like an amputee, and there’s a big hollow in one of the trunks that indicates that the tree might not be in the best of health.

If this one goes down any time soon, it should probably be filed under “Things I Should Have Taken Care Of.”

Like that weird lump on my finger or the sinking concrete deck around the pool.

So I looked out the window at the tree my daughter was pointing to and inside the hollow was a raccoon, just sitting there staring back at us. It looked almost fake, like someone had put a muppet inside the hole, with its pointy snout and little black mask across its eyes.

And now, for the past two days, we have been absolutely obsessed with the thing. We even named it.

I initially felt strongly that it was a girl and suggested we call her “Rhoda” or “Rhianna.” When those ideas were shot down, I began referring to it as “Bandit” or “Badger” but that ultimately pissed my 12yo son off, as he kept insisting we could not call our raccoon “Badger” since that was, like, the name of another kind of animal altogether.

Then my daughter was like, “It’s definitely a guy,” and suggested we call him “Kenneth” and we all agreed that name fit him perfectly. He is such a Kenneth. 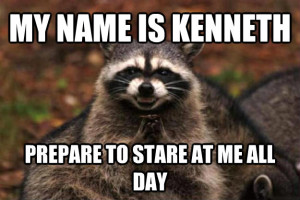 Lately, I spend most of my days at my kitchen table sitting at a chair tucked into a bay window area that looks right out at Kenneth’s tree about 20 feet away. All day yesterday, while I should have been doing other things, I watched him dozing in his hole and occasionally would see the top of his head moving up and down as he groomed himself. Every once in a while, he’d stop and push his face out of the hole a little to enjoy a rush of cold air going by. A few times, he actually stretched his body out of the hole and basked in the afternoon sun, closing his eyes and luxuriating in its warmth, and then he’d go right back to scratching himself. I decided right then and there that more than anything else, I wanted to come back as a raccoon in my next life. I wouldn’t mind spending my days napping and grooming myself and taking a break to feel the sun on my face or the breeze in my fur.

Sounds perfect to me.

(The above is a terrible video that really doesn’t show anything except how sick my daughter was when she went outside to try to film Kenneth this weekend).

There was a bit of debate as to whether Kenneth had always been living in that hole, watching us going on with our lives while he nipped at the bugs on his belly, but we ultimately decided he must have moved there more recently. Our real neighbor, the man who owns the actual property behind us where Kenneth is living, recently had a whole crew of tree dudes in his yard chopping down most of the trees back there (other than the one that’s eventually going to kerplop into my yard).

“Kenneth was probably living in one of those trees,” my daughter deduced, and that seems like the best explanation to me.

She came home from school yesterday and walked over to where I was sitting, my chair angled to get the best view of Kenneth’s activities, and we both sat and watched him for a while. Every time he stopped his grooming and looked up towards us, so we could see his pointy little ears and the mask, we’d stop mid-conversation and say, “Ohhh.”

As the sun went down and we could no longer see the tree through the window, we speculated over dinner as to what Kenneth was up to. We joked that he had made his way up to my daughter’s bedroom and was in her bed (she doesn’t even like me in her bed, much less a hairy wild animal) or that we would come down in the morning and find him sitting at our kitchen table with a mug of coffee.

Alas, when we did come down to start our day this morning, there was no sign of Kenneth anywhere. He’s not in his hole and we’re beginning to get a little concerned.

“GO LOOK FOR HIM,” my daughter texted from school earlier. “DO SOMETHING.”

But I really don’t think there’s much I can do when it comes to looking for a lost raccoon. It’s not like I can call the police or the SPCA. I can’t imagine, even though he’s really cute, that anyone is going to call to report that they found someone’s raccoon. Even one with a proper name like Kenneth.

So, because I couldn’t stare at our raccoon this morning, I took to looking at my son instead. I told him how handsome he looked wearing the same husky Gap corduroys — the kind where you can cinch in and let out the waist as needed — that he wears about four out of five school days during the week and his standard soccer jersey on top. I followed him into the mudroom as he went to grab his sneakers and he finally said, “Okay. You don’t need to watch me put on my shoes.”

Maybe that’s why I liked watching Kenneth so much. I’ve got fewer people who let me stare at them around here. I miss when they were little and I could marvel at how they could speak and move all on their own and their perfect little bodies. Now when I try to admire them for any length of time, I’m told I’m acting like “a creeper.”

Not to fear, though. I’ve been vigilant today, on the lookout for Kenneth, watching to see if maybe he crops up in a new nest or maybe in the next yard over. It seemed like he had such a good set up though. I’m struggling with why he would leave. Maybe all our staring got to him after a while. Maybe it was all a little unsettling.

And I mean, if worse comes to worse, I could always just go and stare at my cat.

16 thoughts on “Our New Neighbor”