I have always enjoyed group activities with large groups of women.

Over the years, I’ve learned to knit, trained for triathlons, talked about a lot of books and drank plenty of wine in the company of women.

And while I’m more than comfortable going cross country skiing or traveling to a desert spa with a group of girls, I was surprised to find myself early one Saturday morning last month at a gun range with eight other women.

“Shooting is like the new bowling,” reported The Wall Street Journal earlier this week and apparently, I am right on trend.

Shooting alleys are the latest destination for a ladies’ night out, according to the article, with women becoming one of the largest growing segments of gun buyers.

I can’t tell you how confusing this is to me.

I don’t like guns. In fact, I believe in my heart that the world would be a much better place if firearms were left in the hands of trained professionals.

I was driving in my car on the morning of Dec. 14 last year when I first heard about the shooting at the Sandy Hook Elementary School. I listened in shock as reporters described the chaotic scene as emergency workers and frantic parents descended on the school.

I quickly made my way home and sat on a stool in my kitchen and spent the rest of the day watching the tragedy unfold on CNN. Slowly, pieces of the terrible puzzle came together: the small elementary school, quiet New England town, faces of the tiny victims and the teachers and administrators who so bravely tried to protect their young students.

Watching the hours of non-stop media coverage – the aerial view of the scene with the lines of children being rushed away from the school and the armed guards walking past colorful playground equipment – I was struck by how familiar so much of it looked.

It’s the stuff my days were made of. School age children. Backpacks. Jungle gyms. Bike racks. Drop off and pick up.

Maybe that’s why I cried so much that day. I could feel deep in my bones the horror that tore through that community on a quiet December morning a few weeks before Christmas.

I live in a quiet town, with a small elementary school that my four children attended filled with artwork lining the hallways and loving teachers in the classrooms. Like Sandy Hook, our school is locked up tight and visitors need to be buzzed in by the main office and students and staff often performed lockdown drills.

But none of that mattered in Newtown. All of those safety measures would not have mattered at any school that day.

And this brings me back to the confused part: Why are we not trying to curtail the number of guns circulating in this country or at the very least, passing legislation to make it tougher to obtain a weapon in the first place?

I spent a week last summer sailing with people from all over the world – Canadians, Europeans, Australians – who wondered the same things about our country. They expressed dismay over American’s unwillingness to let go of their right to bear arms unlike many of their own countries that have enacted stricter gun laws following mass shootings.

According to a report in The New York Times, we have more guns per capita than any other country, with some 300 million firearms in circulation. That’s nearly one for every adult.

And we have the murder rate to show for it; ours is roughly 15 times that of other wealthy countries.

So imagine my surprise when I found myself nearly a year after all those children and teachers were killed in Newtown, holding a Glock pistol and feeling the weapon recoil as I fired at a target 20 feet away.

I had wanted to understand the fiercely-protected Second Ammendment and the rights it guaranteed me. I wanted to know what the fuss was all about.

The women I went with were part of a newly-formed group looking to try new experiences and when one of the women suggested a trip to the gun range as a possible activity, I immediately said, “I’m in.”

And it was a really fun day.

We all joked about the pink revolvers for sale in the glass display case and that we would all be prepared in the event of a zombie apocalypse. 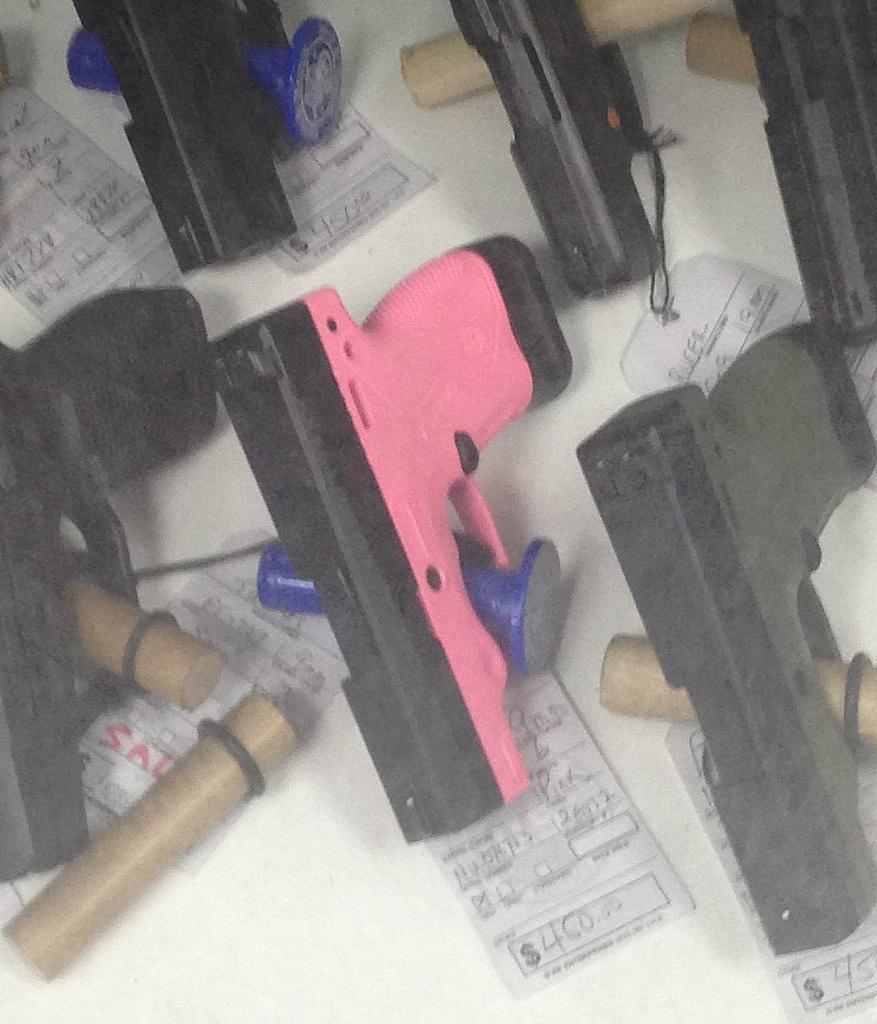 We were required to take an exhaustive two-hour class prior to the actual shooting. Our instructor Bob – wearing a Smith & Wesson t-shirt and a belt around his waist supporting a holster, his cellphone and a large ring of keys – went over everything from home invasion to cleaning a gun barrel. (I would like to add a side note that it is not mandatory for gun buyers here in New Jersey to take any type of safety or how-to class prior to purchase.) 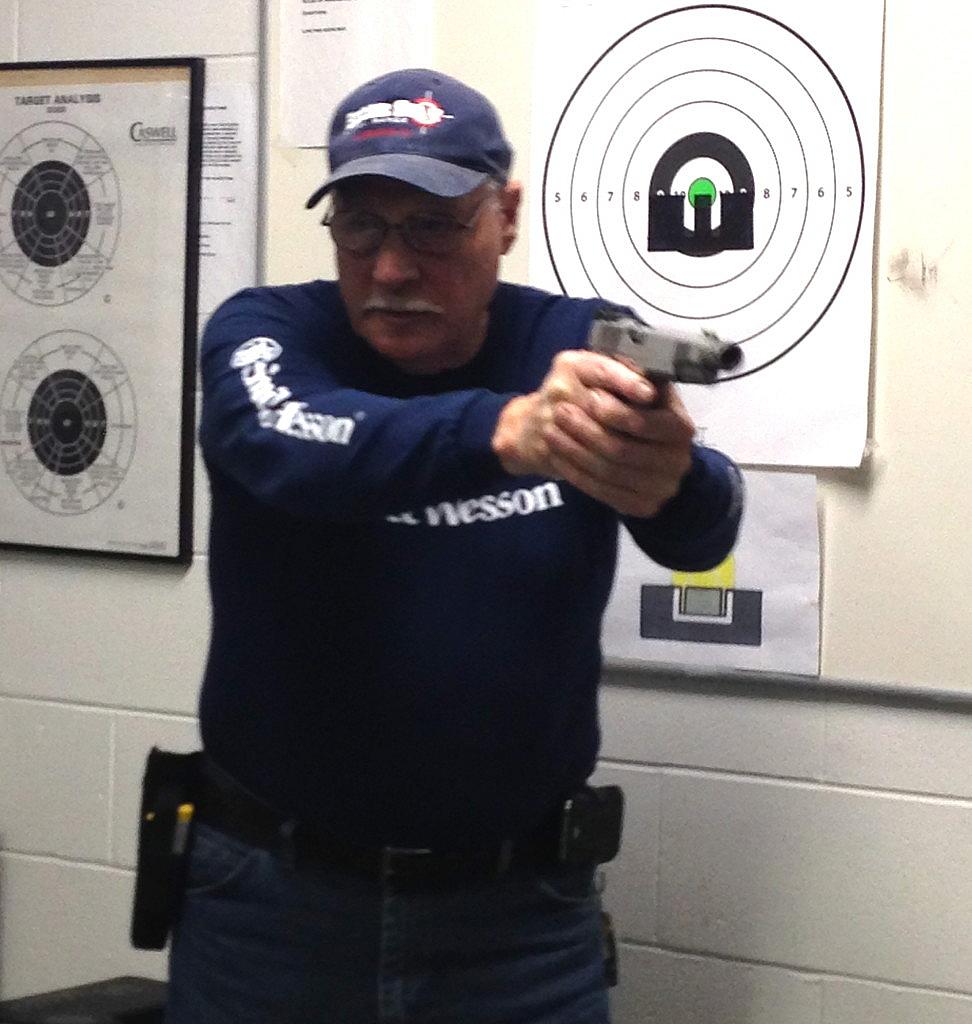 You could tell Bob, who was maybe a little younger than my dad, got a kick out of us but he also took gun safety – and the right to bear arms – very, very seriously and I admired that.

He patiently answered questions about permits and registration and passed around his own hand guns — a .22, .45, Glock and revolver — so the group could hold them and feel their heft. We were able to observe the parts of the weapons close up: the muzzle, the hammer and the barrel. We could look into the bullet chambers and feel the free play of the trigger.

When Bob had finally imparted all he deemed necessary for us to shoot a firearm, we headed off to the adjoining range and donned the mandatory ear and eye protection before entering through a metal door plastered with warning signs. 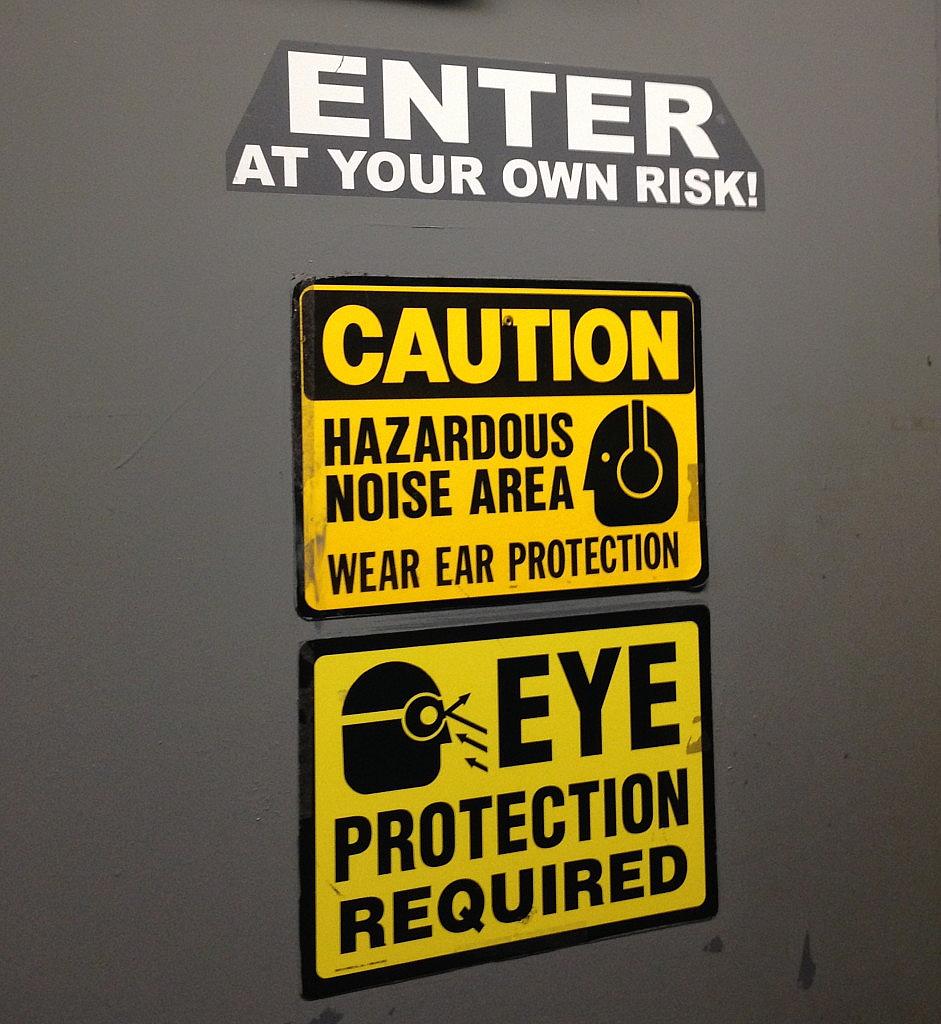 It’s a large and loud room with 10 stalls divided by thin partitions, various targets pinned to cardboard sheets that automatically move forward and back and empty casings pooling on the floor around the feet of the shooters that one of the men patrolling the range would occasionally come by with a big broom to sweep out of the way.

And sure enough, we weren’t the only women there shooting that day. But while the women in my group were all in the late-40s-to-early-50s range, most of the other women looked to be more in their 20s and accompanied by boyfriends or husbands. And while our group was sensibly dressed in long sleeves and sneakers, the other women looked like they could be spending their day shopping at the mall. One of the girls wore skinny jeans with ballet flats in an animal print, a thin, gold chain wrapped around her ankle.

We took turns shooting with Bob and I watched several members of my group go before I took my place before a counter upon which sat a .22 caliber handgun, a box of bullets and a magazine. Bob instructed me to fill the magazine with the small bullets much the way you would load Pez candy into, say, a Bart Simpson dispenser.

And while it was super-satisfying being able to slam the magazine into the handle when I was done, Angelina Jolie-style, the actual firing of the weapon was nerve wracking. There’s a lot to keep straight – between the positioning of your hands and lining up your sights on the intended target, and I didn’t really set any records with my shooting. Bob stood alongside me the whole time, adjusting my stance and instructing me to lift the gun higher and not to put my finger on the trigger until I was told to do so.

As the day progressed, the group was very busy taking pictures of each other and posting our badass selves all over social media. We all went out to lunch afterwards and did a round of Fireball shots to celebrate our experience.

“Are you having a mid-life crisis?” my 19-year-old daughter posted on Facebook when she saw the picture of me shooting a gun. 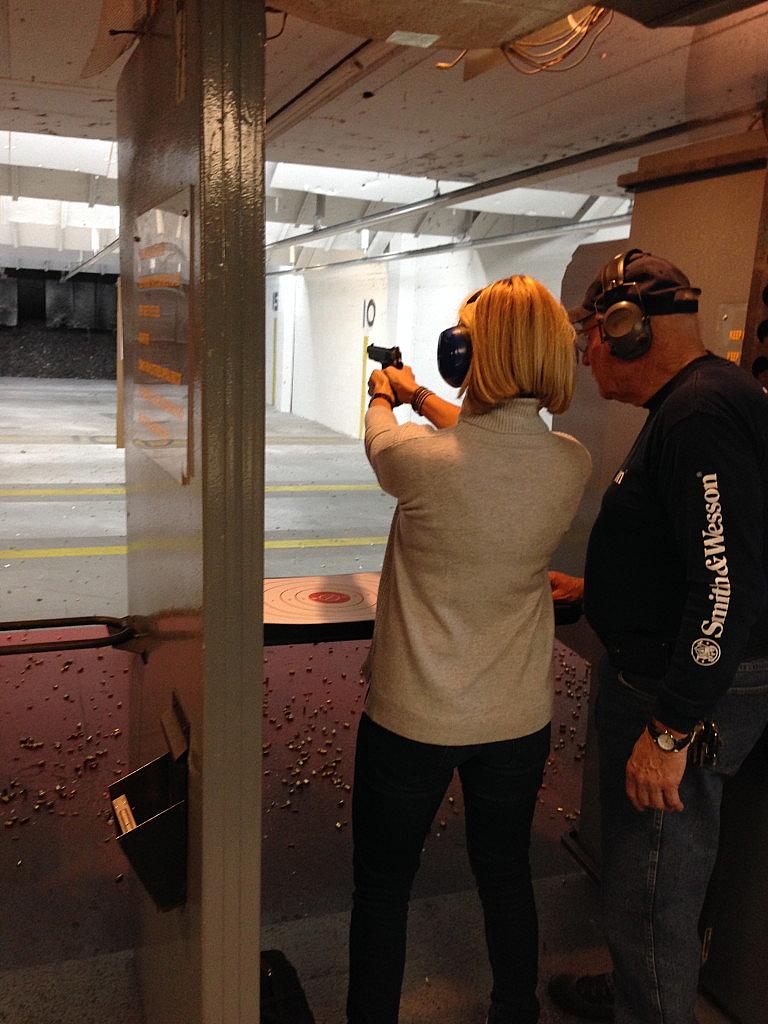 I sent a picture of myself shooting the .22 to a friend of mine who is a big gun advocate and happened to be away hunting for the weekend.

But I didn’t respond because I didn’t know what to say. As much as I really enjoyed the experience of shooting a gun, I still don’t get it. It wasn’t like when I tried kayaking a couple of summers ago and now dream about owning a kayak.

I don’t think I’ll ever buy myself a gun.

I thought shooting at a target was kind of boring after a while and couldn’t wait to get out of the gun range and go get something to eat. Maybe shooting at a picture of a zombie would have been more fun.

But I have to imagine that more guns won’t solve anything.