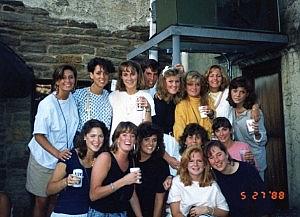 I drank something called jungle juice this weekend and as I lifted the Solo cup brimming with the icy yellow liquid to my mouth, I realized that I needed to retract a statement I made recently – that you couldn’t go home again – because dudes, sometimes it’s like you never left.

I drove eight hours south for parents’ weekend at my son’s fraternity this past weekend and found myself standing on the back deck of the “house,” as the brothers call it, Saturday morning and being handed the alcohol-laden beverage.

Here are the ingredients: 30 cans of Keystone Light, a handle of Aristocrat vodka, a package of powdered lemonade and ice.

The fraternity had organized a lovely dinner the night before at a local country club for the parents and the next day we gathered at the fraternity house for an early tailgate before the football game kicked off at noon.

I had watched earlier as one of the guys wheeled a cooler across the deck and set it on top of one of the picnic tables. You could tell that this was not the cooler’s first tailgate. He lifted the attached lid and boys surrounded the cooler and started popping open cans and pouring beer directly into it.

“Here, just try it,” said my son, who had gone right over to scoop himself a Solo cup full of the juice. I took a sip and felt Amy, circa 1986, start to come to life.

I have to confess that I know my way around a tailgate. And fraternity houses too, for that matter. I went to a big state university and joined a sorority and while I’m pretty sure I never missed one tailgate in the four years I was there, I also don’t think I ever made it in to see one football game.

So I get the excitement of game day. I understand the culture that makes a cooler into a cauldron of high-octane booze to be enjoyed at 10 a.m.

But 25 years later, I discovered that you notice more of the details. You’re no longer seeing things through the hazy filter of someone enamored with drinking cheap beer surrounded by friends and that cute guy you want to ask to the sorority formal. The beer and the boys, those were the focus points back then. I hung out in dank bars that had quarter mug nights and musty fraternity basements where you knew not to go near the punch.

But when you briefly return to Greek life after a 25-year break, you realize that your standard of living has risen dramatically. Like, I now enjoy things such as toilet paper and clean floors, neither of which was available at Saturday’s tailgate. I was so skeeved-out standing outside on the deck that I had to switch out of the flip-flops I was wearing and put on the pair of flats I had tucked in my bag, just to increase the distance between my feet and the rotting wood below.

And don’t get me wrong: the boys had worked hard to provide a well-stocked bar and put out a barbecue spread with a pulled pork so tender it would make you weep. There were just some details the guys neglected to take care of, like the aforementioned toilet paper. And, okay, I’ve had to go without paper a time or two in my life, but then there was the actual condition of the ground floor bathroom.

You. Wouldn’t. Believe. It.

I guess the best way to describe it is the tell you to close your eyes and imagine what the bathroom in the “Animal House” fraternity must have been like, and then imagine yourself standing inside it with your pants pulled down and squatting.

And then there was the mop.

As it had started to drizzle, the guys set the buffet up inside and we all filed in to stand on line. As I was waiting just inside the back door, I noticed to the left a mop propped up against the wall and was so glad I had switched out of the flip-flops. 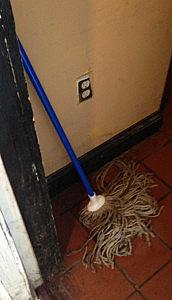 I can guarantee you that in 1986, I would not have thought twice about that mop. In fact, we probably had one propped somewhere in our own sorority house. And if you interviewed any of my former roommates between 1984-1990, they would probably tell you that I was not the cleanest cat in the litter box. It never would have occurred to me to change my sheets, vacuum a rug or scrub the tub. I was oblivious to filth.

Today, I can’t walk by a littered counter without wiping it and I pay a woman to come and clean my floors and wash my sheets once a week.

The biggest difference, though, between 1986 Amy and the woman I am today is that now, I know exactly where my off button is (well, for the most part).

The old Amy would have had three or four cups of jungle juice instead of sharing one with a couple of the other people I was standing with. The old Amy would have had a hard time tearing herself away from the back-porch-fun to hike the mile or so in the rain to sit in the stadium and watch the game (well, the first half anyway). And the old Amy definitely wouldn’t have decided, after stopping back at the fraternity after the game and assessing the trash strewn across the deck and the girls dancing on the table, that it was best to turn around and leave.

Instead, we headed back to one of my daughter’s friends’ apartment where we peeled off our wet jeans to throw in the dryer and lounged around in borrowed sweats watching “Pitch Perfect” and “He’s the Man.”

And when nighttime came, I drove the whole crew of girls back to my daughter’s apartment and sat around and gabbed with the girls for a while, and then when it seemed they might want a drink or two, I packed up and went back to my hotel.

I posted a bunch of photos of me and the kids on Facebook over the weekend and one friend commented, “I wish I could go back to college!”

And I’ve decided that college is a nice place to visit, but I wouldn’t want to live there. 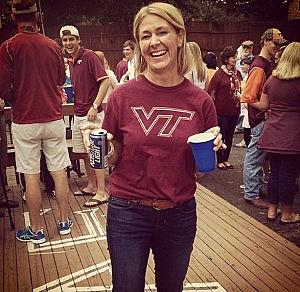