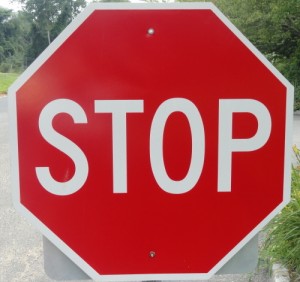 You’d think I’d be used to it by now.

You’d think that by now my arms wouldn’t fly up to shield my head reflexively as we hurtle past parked cars and stop signs, preparing for imminent impact.

By now you’d think that I’d gotten used to how angry they become when I shout things from the passenger seat like, “Move away from the curb!” or “Slow down for the turn ahead!”

It hurts their feelings.

Listen, I’m just trying to get through this in one piece and hurt feelings are the least of my concern.

I am in the midst of surviving my third child learning how to drive and I don’t know if my heart, or my pocketbook, will be able to handle doing this a fourth and final time when my youngest gets ready to take the wheel in a few years.

I’ve already spent hundreds of dollars on a professional driving teacher who took my daughter out for the mandatory practice hours required to get her driver’s permit before she turned 16.  Now we just need to make it her to her 17th birthday which, if her last turn at the wheel is any indication, is not looking so good.

The kids and I had been trying to squeeze in a date to see “Catching Fire” over Thanksgiving break before my oldest daughter headed back to college, and we decided the only time we could fit it in was that Saturday night.

As we piled into the car for the 7:00 show, I decided that the driver-in-training needed some nighttime experience and insisted that she take the wheel.

So, in New Jersey at the end of November, the streets are lined with large piles of leaves. For all you know, there could be a large crate of glass bottles, boxes full of nails or at the very least a super-sharp set of kitchen knives lurking under all that foliage.

Which it seems there was, because after my daughter plowed her way through four or five large piles of leaves – as she instinctively shied away from the middle of the road and hugged the curb – we heard a thumping beneath the car.

“Do you hear that sound?” yelled my older daughter from the back seat.

I quickly turned down the deafening music from my daughter’s iPhone filling the car with Daft Punk and heard the unmistakable cuh-cunk of a flat tire.

Okay, this is where I kind of lose my cool and get a bit hysterical. Fearing the dreaded bent tire rim, I started screaming for her to pull over. What I was trying to say was, “Take the next right,” but what was coming out instead was “Pull over. Wait! No! There’s a … stop! No. Go! Turn! Up Ahead!” so that the driver didn’t know what the fuck I wanted her to do and became equally, if not more, hysterical.

Katniss was off the table for the evening as we waited in the dark for the AAA tow truck to arrive to swap out the damaged tire for a spare. By the time we headed home, the bad driver already had a Plan B in place for her night and needed a ride to the high school football game.

This time I drove.

When I brought the car into the mechanic a few days later to see if the tire could be saved, I learned the gash was so big, I would need to purchase a whole new tire instead.

It was just another in a long line of expenses my children have racked up since they started to drive.

We’ve had numerous parking lot fender-benders, so many in fact that I started to wonder what the fuck was wrong with my kids. Did we need to, like, wrap our car in rubber or something for the good of other drivers? The kids were like pinballs, knocking and banging our car off everything in sight.

In the last four years, I’ve had the police arrive at my door to inform me a car registered in my name had been involved in a hit-and-run in the parking lot of a local pizza joint.

I’ve had to hunt down a very nice older woman and fellow member of our beach club on a hot day in August to inform her that her shiny BMW SUV had been sideswiped by one of my children.

And one time an angry Cadillac owner called to tell me one of my kids had backed into his car while trying to pull out of a parallel parking spot. Please let the record reflect that my car comes equipped with a rear view camera that beeps if you get too close to the object behind it.

My insurance company probably has an employee lunchroom at its headquarters somewhere in the Midwest named in honor of my children and their driving gaffes.

I thought the answer to the first round of bad driving was a lack of experience and figured I’d remedy that this time by making the 16-year-old drive all the time.

But now I’m not so sure.

The good news is by the time my fourth child needs to learn how to drive, he’ll probably employ the same method he used to learn to tie his shoes and ride a bike: He’ll teach himself.

It cuts down on shouting and then everyone is happy.