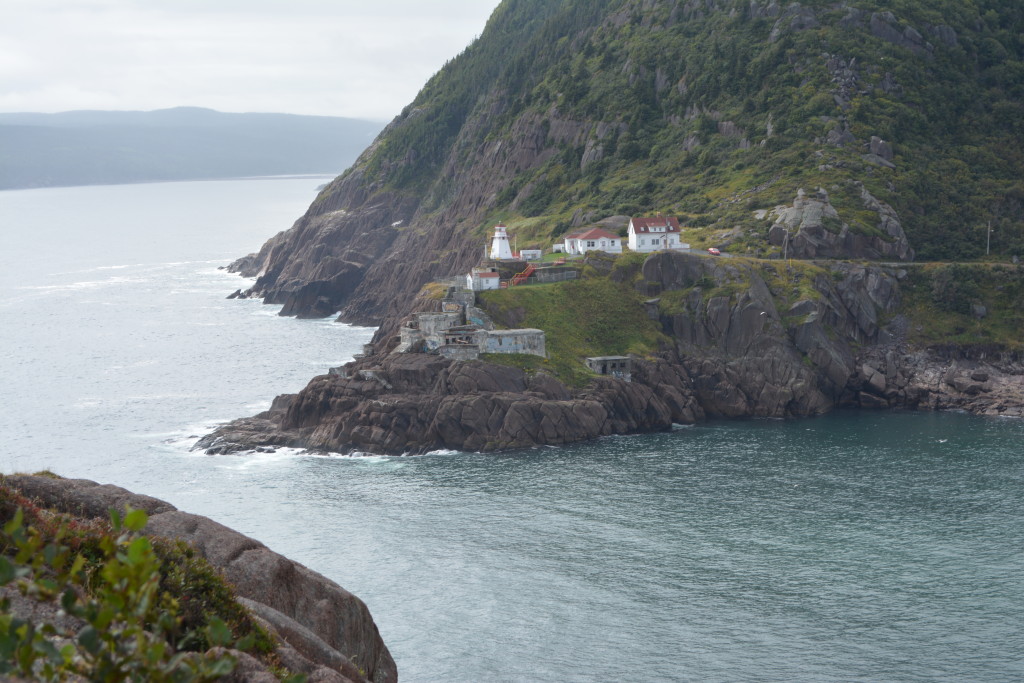 The view hiking up towards Signal Hill in St. John’s, Newfoundland.

I was reminded recently why I love to travel. Why I need to travel.

I returned last week from a four-day jaunt to Newfoundland with three other women and yes, I know, you’re not the only one who thinks this is an odd choice for a girls’ getaway. Why not Vegas or South Beach, you’re wondering.

Imagine the locals’ reaction when they learned the Girls From Jersey, as we came to be called, travelled to the middle of the Atlantic Ocean for a vacation. It ain’t no Napa.

And initially, I thought it was a little weird, too.

The occasion was a close friend’s 50th birthday and she determined we should all head north. Like, really far north. But she proceeded to do all the research and make all of the reservations and I am a baby and deep down love being told what to do so happily agreed to join her. The four of us also happen to travel really well together. There isn’t a diva in the group and we’re all pretty flexible. Some of us like to adhere to rules more than others, but that causes amusement rather than irritation among the group. At least it does for me.

The birthday girl’s logic, when she later explained how she chose our destination, made perfect sense. She said beach getaways and wine tours were lovely, but she wanted a little more excitement. Something out-of-the-box.

“I wanted an adventure,” she told me.

And that’s what we got.

I’ve spent a lot of time since my return extolling the virtues of Newfoundland in particular and Canada in general and have been encouraging everyone to make plans to go today. And you really should because soon, you will not be alone. An expansion project in the works will double the size of the airport in St. John’s, the island’s largest city on its easternmost point, by 2020 to accommodate the approximately 2 million tourists expected to visit Newfoundland. You’ll thank me later.

On the three-hour flight home, my travel companions and I decided that what made Newfoundland so special was a combination of three outstanding features. 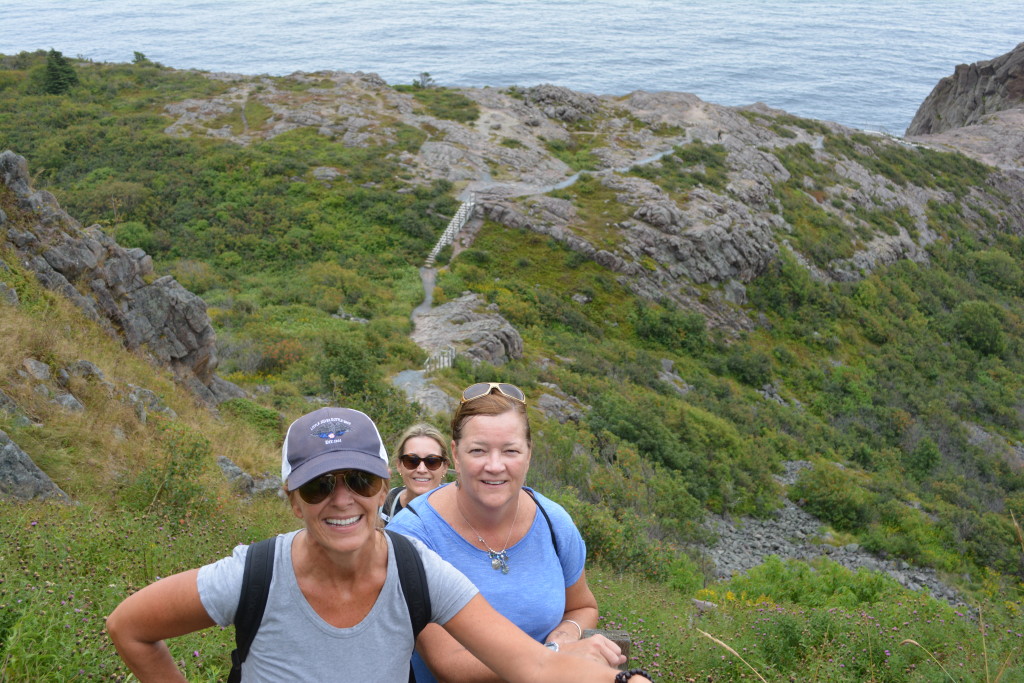 Hiking up towards Signal Hill in St. John’s, Newfoundland.

I don’t want to spend too much time giving you the history of the island or describing its geography. Let’s just say that initially, I assumed it was off the coast of Maine only to discover, right before I left, that it is significantly more north than Maine and way east. Like, we visited Cape Spear – just south of St. John’s – to take selfies standing at the easternmost point of North America. Keep going from there and eventually you hit Ireland (in fact many Newfoundlanders speak with an Irish accent and there’s a vibrant Irish music scene). Newfoundland is right under Labrador, where you’ll find arctic tundra and icebergs float by in the spring. And the combined population of the two regions, which comprise one Canadian province, is a little over 500,000. FOR BOTH. Just to put it in perspective, in 2014 there were 8.9 million people living in New Jersey.

During the late spring and summer you can see whales who journey north to feed on the water’s abundant krill and icebergs float south from great glaciers in the north. Our visit was on the tail end of all that excitement but we did get to see a lot of puffins on a boat tour out of Bays Bulls and two bald eagles soaring through the sky. We also saw a giant mola mola or ocean sunfish eyeing us as he floated atop the waves until he dove down and sank out of view.

When we weren’t stomping around hiking trails and old fishing villages, we also enjoyed the sights of St. John’s colorfully-painted “jellybean” buildings and the interiors of a fair share of Irish bars.

And I’d be remiss if I did not mention the scent of the sea — and not the Jersey Shore low tide odor — but the ancient, salty blast that hit us as we descended from Signal Hill into the old fishing village Quidi Vidi. It was accompanied by a blast of cold air that cooled us down after a sweaty hike to the top and reminded us how everything about Newfoundland was unpredictable. We were constantly surprised during our stay.

Finally, we rented a charming house in the city’s Outer Battery section just steps away from Signal Hill that offered sweeping views of the city’s busy harbor. Beautiful spot to cozy up on the couch in our pjs to sip coffee and watch the fog roll in each morning and to drink a glass of wine and see the harbor lights twinkle in the background before dinner. But I mostly loved falling asleep each night with my head next to an open window and listening to the sound of the water hitting the rocky shore nearby and the moan of a lighthouse in the distance. We were sorry to say good-bye. 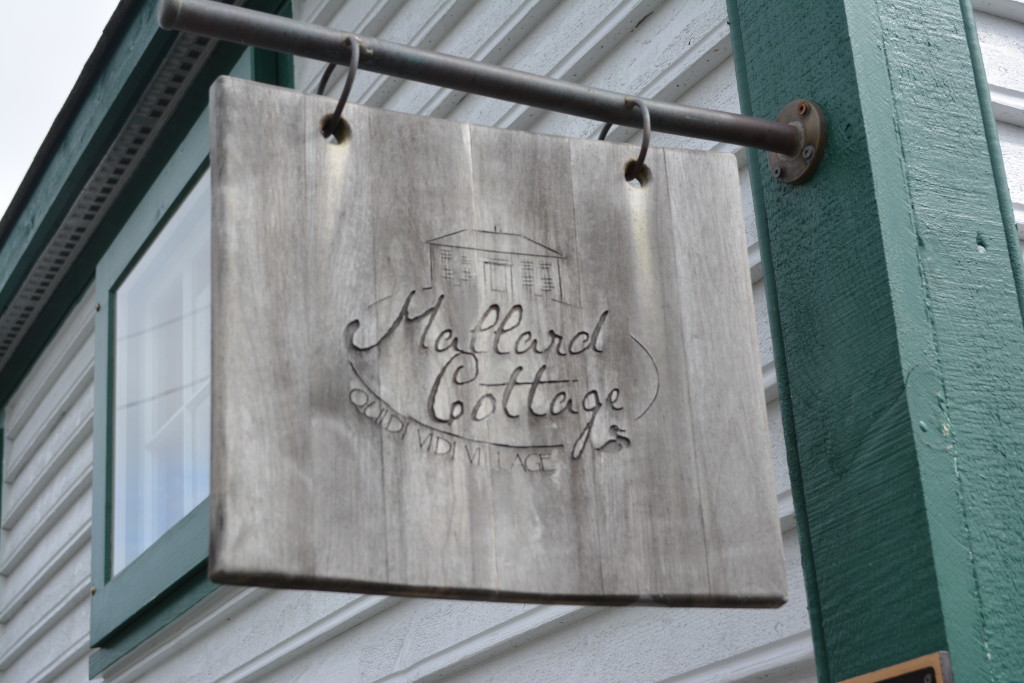 The Food and Drink Scene

Would you believe that one of Canada’s top-rated restaurant – I repeat:  top-rated  – is right in downtown St. John’s? Prior to our trip, that little fun fact left me dubious about Canadian food in general. I mean, how good could the food be if the best place is on some random, barren island, I thought?

And so, to all of the good people of Canada, I’d like to apologize for my ingnorance. If Newfoundland is any indication, you people are eating like kings. At least compared to the food and drink found in my neck of the woods. 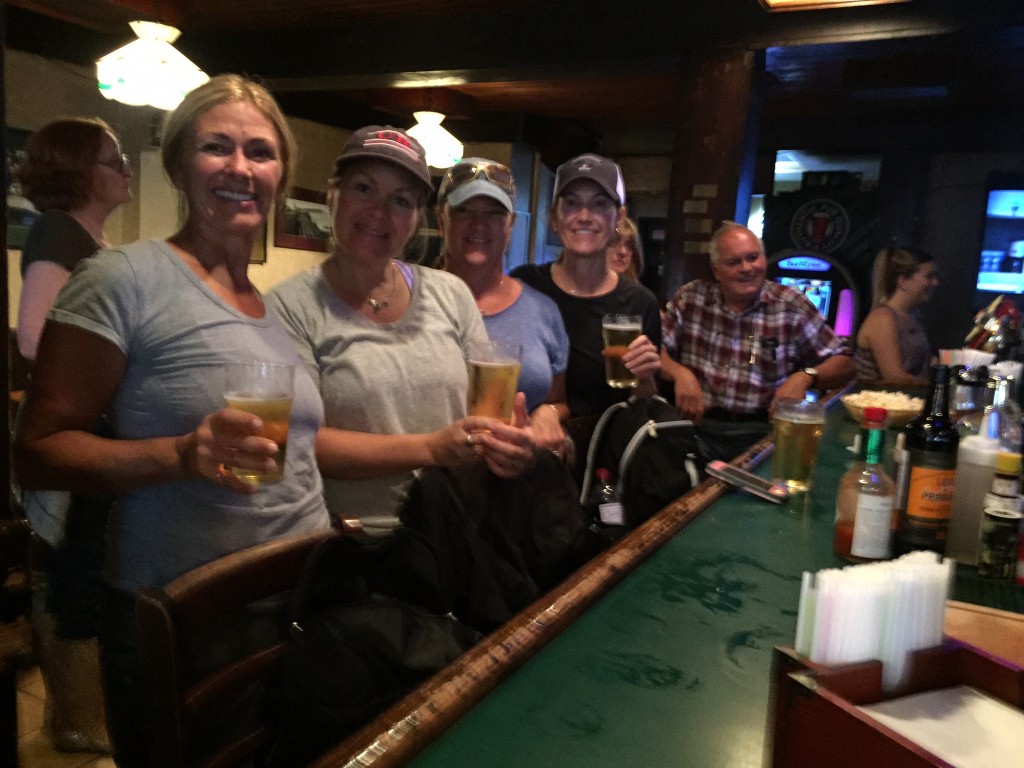 Getting “screeched in” at Christian’s and becoming honorary Newfoundlanders.

There are plenty of beautiful places to travel in this world. And plenty of destinations where you’ll find outstanding food and drink. But the reason you should visit Newfoundland is for the people. They behave the way we are supposed to behave as humans. They are polite. They are considerate. They are kind. They are curious. They are knowledgeable. Time and again we had encounters with the locals that left us shaking our heads and marvelling how certain things would never fly where we live. I’m taking about:

I’ve joked in the past that friendly people make me nervous but honestly, after a few days in Newfoundland, I was sorry to return to a decidedly less kinder and gentler place to live. Where oncoming traffic doesn’t stop to let you pull out of a parking lot and TSA agents don’t bark at you to take off your jacket.

On our last night we ate dinner at a hot new restaurant on Water Street called The Social House. We sat at a high top table and slurped our final plates of oysters and chatted with our charming young server named Jordan. He told us he’d grown up in Sweden and moved back to Newfoundland – where his dad was from – a few years earlier and was finishing his last year at university. The 21-year-old talked about his internship in broadcasting and thoughts about breaking into sales and we asked him where — with all those plans — he thought he’d wind up after graduation.

“Right here,” he said, spreading his arms. “We have everything we need right here.”

And so they do. I’m glad I got to experience it for myself.

12 thoughts on “Newfoundland: Not Your Average Ladycation”