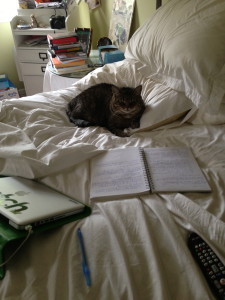 My Grey Gardens set up in my bedroom where I like to watch Netflix. A lot.

I am totally sick.

But never fear, I’ve been through this kind of thing before.

The symptoms usually come on quietly at first.

I’ll find myself lying on my bed in the middle of the day for a spell and before I know it, three hours have slipped by and it’s time to make dinner.

Do I have a fever? Negative.

Am I depressed? Nah, although I am a little down on myself lately for wasting many perfectly good hours that could have been used for more productive purposes – like food shopping, perhaps, or paying my bills. Writing content for my blog would be nice, too.

Instead, I am addicted to yet another TV series that I am inhaling in two- and three-hour increments in the comfort of my bedroom courtesy of Netflix.

My kids bought me a Roku for my birthday, which my daughter skillfully hooked up to the TV in my room, so now I don’t have to access Netflix through the Wii in our family room or on my laptop if I want to remain lying on my bed and fulfill my Grey Gardens destiny. (Among my beautiful Roku’s many tricks, I can also access shows and movies through Amazon, Hulu Plus, HBO 2 Go and listen to Pandora, to boot.)

“I’m never going to leave my bedroom,” I said to the kids when I opened my birthday present.

“That’s what we’re hoping,” one of them told me. Oh, how we dislike each other come August each year.

My obsession du jour is the steamy ABC drama “Scandal,” which I totally ignored for two seasons but then the non-stop hype over the star Kerry Washington – culminating in a Vanity Fair cover story this summer – was more than I could bear. So in the interest of being well-versed in all-things-pop-culture, I got onboard last week and started watching Season 1.

And by now, I’ve said adios to about 20-odd hours of my life as I am now tearing through Season 2 and marveling at Olivia Pope’s drop dead wardrobe – you should see the fabulous mix of drapey silks and cashmere basics she wears in gorgeously-soft neutrals – and the actress’s ability to get all lip-quivery and teary by both the threat of public recrimination or the advances of her super-hot boyfriend president.

It’s a little bit like eating box of Cheez-Its: totally salty, you know you should stop but you just need a little bit more.

Prior to my imaginary stay in the cutthroat world of D.C. politics, I spent the earlier part of the summer in a women’s prison in Connecticut while savoring the 13 episodes of Netflix’s newest series, “Orange is the New Black.”

The characters are so rich and complex, and their back stories are so compelling, that it more than makes up for some of the pretty raunchy moments that may give prudish viewers pause. And the creator is the same woman who came up with “Weeds” and I mean, who didn’t have a crush on Nancy Botwin at some point?

I also spent some time this summer slowly making my way through “Arrested Development,” which has me legit bursting out laughing a few times each episode. It’s all so ridiculous. Like, neverernude? C’mon.

I got hooked when my oldest set up camp in the den, which is right across from where I work at the kitchen table, during the week he had off between the end of spring semester and the start of his summer job.

I couldn’t see the television as he cranked through the early “Arrested Development” seasons that rainy week, but I could hear some of the insane things the characters would say – like the mother, Lucille Bluth, telling one of her adult kids, “You’re my third least-favorite child,” or saying to her daughter, “I don’t criticize you! And if you’re worried about criticism, sometimes a diet is the best defense.”

After listening to a marathon of episodes over that week I knew I needed to go back and watch the craziness for myself. My whole family has gotten on board with the show by now and I’ve even caught the 10-year old watching episodes on his mini iPad via Netflix. He and I even had an “Arrested Development” marathon one night last week, which I know is an insanely inappropriate show for a little boy to watch, but he’s the fourth and I’m tired. And he really is my little Buster.

Over the last 12 months I’ve whiled away countless hours binging on “House of Cards,” “Game of Thrones” and “Breaking Bad,” while the world went on without me. And I think I’m one of the 10 people that watched all 13 episodes of Netfix’s wildly-panned horror series “Hemlock Grove,” which I did over the course of one weekend last spring. (What can I say? I’m a sucker for monsters.)

In the meantime, I’m supposed to be reading Middlemarch for my book club and writing a book of my own.

But who has time? I’ve got to get through the last 9 episodes of “Scandal” and make sure Oliva and Fitz are back together going into Season 3.  And I am thinking about revisiting all 5 seasons of “Friday Night Lights” and totally need to catch up on “True Blood.”

No wonder there’s no food in the house.

What’s on your DVR or waiting in your Netflix queue?  Your secret is safe with me. Shhhh.