In the middle of one day last week I was busy working on my laptop when my phone dinged with a text from an unknown number asking how many retweets it would take for me to go to prom.

Since I don’t get asked to prom every day, I texted my 17yo daughter to see if she knew what was going on.

She immediately texted back in the affirmative and told me to come up with the number of retweets I would need to go.

I texted back her name in all caps and lots of exclamation points and she texted, “It’s a compliment.”

“Just play along,” she added.

So I thought, why not? What harm could it do? Why do I always have to overthink everything?

I tried to come up with what I thought was an impossibly high number of retweets based on my own Twitter account and came up with 25.

In retrospect, I know.

She came home from school later and told me laughing that she had been at lunch and one of her guy friends had joked about asking me to prom and that’s how it transpired. She explained that sometimes when a guy wants to ask a girl who’s out of his league to prom he’ll ask her if she’ll go if his tweet gets a certain number of retweets on Twitter.

She laughed, “Yeah, when he heard 25 he was like, ‘Wow, your mom doesn’t really value herself.’”

I got another text from that phone number last night with the good news that his tweet hit the 25 retweet mark with a bonus 10 favorites.

My daughter and I were busting up over it and her little brother walked in and we told him that I was going to prom. 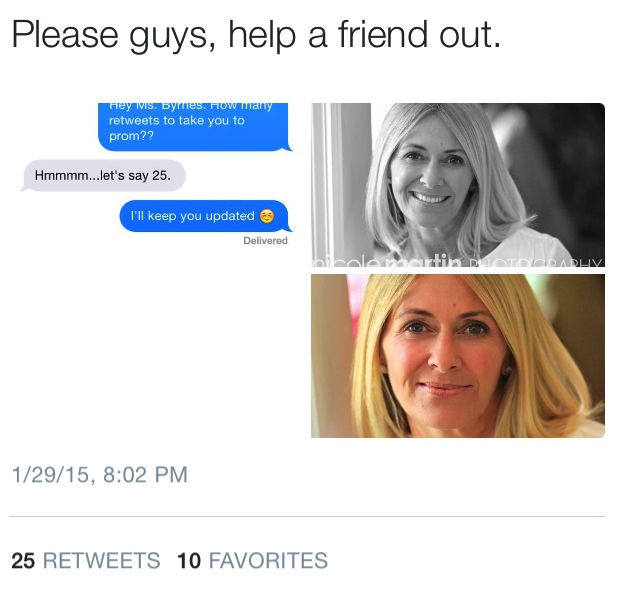 And it really would be if I took any of it seriously. If I didn’t think it was pretty funny but also kind of sweet. It’s a nice compliment at this late stage of my game. The only thing my little guy’s friends will ask in six years when they’re starting to think about prom is why his grandma lives with him.

And now, if nothing else, I know that 25 retweets is peanuts on Twitter.

Sign up to get all my posts sent directly to your inbox. Just plug your email into the “receive new post in your inbox.” Oh, p.s., it’s free.

8 thoughts on “My Prom Date”