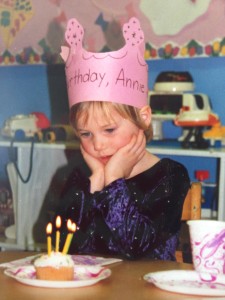 She came two weeks early and easily, swimming out quickly into the world like a good little Pisces. She joined her older brother, who came 17 months earlier and was so naughty, you’d have thought I’d have done anything that I could to prevent having another baby so quickly.

But when you get a night out alone with your husband and college friends and drink one-too-many Mount Gay and tonics, you find that your decision-making skills have become impaired. The booze softens the memories of engorged, leaky breasts and raw umbilical cords. It tempers just how helpless one feels alone watching QVC at 3 a.m. with an inconsolable infant. Or how long the days can feel stuck in a house with a toddler and a cabinet full of Barney videos.

So I got knocked up when my weepy first baby was a mere eight months old and while he had evened out by the time his sister came along nine months later – by then he had stopped crying all the time and had become a sweet little toddler – I had my hands officially full.

I was 27 and had no idea what I had gotten myself into. Not that I’d actually planned any of it, obviously. But while most of those college friends were building their careers and enjoying the freedom of being young and single in Manhattan, I was learning the words to Raffi songs and cutting boiled hot dogs into tiny, chewable pieces (this was back when hot dogs were still a highly-acceptable food staple for little ones).

And I’ve thought about it a lot, about whether I’d change things if I had the chance to go back in time. Would I be smarter about birth control? Some of those questionable hair styles? Would I even have gotten married?

But I spent a lot of time paging through photo albums this morning and picking through the shoeboxes that hold the photo overflow, the B rolls that didn’t make the photo album cut. And I’m reminded looking the kids in their Halloween costumes or opening Christmas presents or covered in bubbles in the tub that even though so much of it was hard – not to mention boring and thankless – I wouldn’t change a thing.

I mean, maybe I wouldn’t wear a scrunchie out in public or overalls the second time around, but I’d pretty much like to go back and do it all over again.

It’s hard to believe that that same little girl who I met late that night 21 years ago is now closer to my age that I was when I had her than I am. It reminds me of A: How old she is and B: How young I was and C: How old I have become.

She’s coming home this weekend for spring break and I’m looking forward to seeing her in person. To having a glass of wine together out in public and getting her to myself for a whole week. And even though she’s a good six inches taller than me now and by all accounts, a legit grown up, that girl will always be my baby. 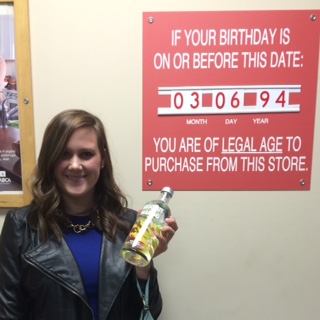 Sure, she can buy cheap booze legally now, but she’ll always be my little baby.

13 thoughts on “My Kids Won’t Stop Getting Older”