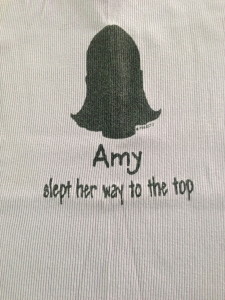 My sister gave me this tank top years ago and even though it’s worn out and my kids are way too old for me to wear it any more, I just can’t bring myself to throw it away.

Really, we were totally on the same page and I thoroughly enjoyed his company. I liked chatting with him and watching how he talked with his hands. And he was really cute, too, with beautiful blue eyes.

And it wasn’t anything fancy, either, our date. We grabbed some grub from the local pizza joint and then decided to ride bikes to the supermarket later to get some Ben & Jerry’s to accompany an Arrested Development marathon.

I mean, the guy knew just what I liked. But of course he would, we’ve been living together for 10 years and I’m actually the kid’s mom.

It’s just the two of us this week – with the two older kids back at school and Kid #3 away at the beach through Labor Day with friends – and a preview of what life will look like in two years when that third child goes off to college.

My son even referred to it as a date at one point and I started thinking about how fitting it was, having a quality evening with a great guy on the cusp of what I like to think of as Operation Date.

It all started, as these things often do (no, not on Facebook this time) in my therapist’s office. On her couch, specifically, which I’ve never lied down upon but where I have found myself crying on numerous occasions and a few times doing some role playing of assorted relationships in my life that vex me.

My therapist is the perfect combination of supportive, yet firm. Like, she always “hears what I’m saying” but she’s not about to encourage me to feel sorry for myself.

She also gives nothing away. She makes me work for my enlightenment. Like after I read a book she had recommended – among many she has suggested over the years – I walked into her office the next week and asked, “Why didn’t you tell me I was codependent?”

She just smiled and shrugged her shoulders.

And in response to questions I ask like “What should I do?” and “How should I feel?” my therapist calmy asks in return, “Well, what do you want to do?” or “How does that make you feel?”

The point is, she never tells me what to do. It’s maddening.

So, imagine my surprise when, during our last session in July, she threw down the gauntlet and issued a challenge.

“Do you think you can go on three dates before we meet again in a month?” she asked.

It had come to that. Even my all-patient therapist was like, “Start dating, already.”

I know. I mean, I’ve been legit divorced for three years and separated at least a year before that.

And to be honest, my focus initially was not on me but my kids and making sure they didn’t have that yucky rug-pulled-out-from-under-them feeling. Not to mention, I’d just come out of a 20+ year relationship – what was the rush? I had plenty of my own baggage to sort through, why start trying to shoulder somebody else’s?

But here’s the truth of it: for as much as I go on about my fear of traveling to Greece alone or how scary teens can be, I am totally terrified of dating.

It is scarier than snakes, zombies and spiders combined. All day long.

But of course, I’m not going to let these things hold me back so on Sunday, I signed up (again) on Match.com.

I signed up probably around the same time last year, but my heart was never in it. I was freaked out by any pokes that came my way or dudes whose eye I had caught. Not to mention I lost the password to the email I had set up for the account and thus couldn’t access anything if I tried.

But this time is different. I was texting with a girlfriend yesterday and announced, “I am going to start dating like a motherfucker.” I am treating this like another job and going to sift through the duds to find some potential gems.

I got this advice from this pretty fabulous woman I met not long ago who married later and thus was better versed on the dating scene than someone like me who pretty much married her high school boyfriend.

We were sitting on the back deck of the local Irish bar, and after she finished encouraging me to sign up with an online service, waved her hand at the assorted not-impressive dudes standing around the bar, and said, “I mean, do you think you’re going to find someone here?”

But so far, it’s a lot of duds. It’s almost comical, really. One gentleman began his email, “Hi, Hunny” (stop, no please don’t say that to me) and another looks exactly like that prison guard on Orange is the New Black they call “Pornstache.” 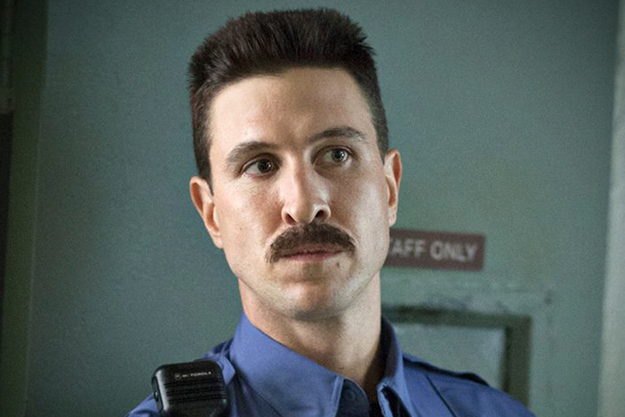 I needed to give you the visual.

And they are all in their 50s and live in like Kew Gardens or Bayonne.

I suppose I could be the one poking or getting my eye caught, but I’m just not there yet.

This is not to say that I don’t want to find someone to watch Arrested Development marathons with and eat straight out of the Ben & Jerry’s tub (naturally we’d each have our own pint).

Someone who asks me if, instead of cutting through the soccer fields and bank parking lot in town, I’d rather ride our bikes the long way home.

Because with him, of course I would. All day long.