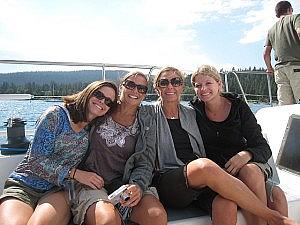 My siblings and I – especially two of my sisters – look a lot alike. Most of us have brownish hair, Hazel eyes and pretty bushy eyebrows that, if left untended, would grow up into our hairlines. And, other than the oldest of my brothers, we are not the tallest people on the planet.

So naturally, when I began to reproduce, I just assumed that my children would look exactly like my people. It was like we came in one basic flavor. But genetics don’t always comply with one’s assumptions and I was surprised to end up with three quarters of my children looking exactly like their father – blue eyes, long-legged and pug nosed – and one of them looking exactly like my father-in-law, especially since she was as bald as he the first few years of her life.

Now I have two daughters with size 11 feet and who tower over me at just about 5’9″ and 5’10”. I literally stand on my tiptoes in pictures just so I don’t look so weird compared to my two tall daughters. Even my head looks really small when I stand next to those two and not in a good way. 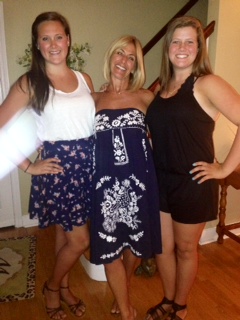 This is me standing on tiptoe and still looking small and weird.

But I always thought my oldest son favored my side of the family – the hair and eyes and bushy brows – despite people always saying he was the spitting image of his father. I just didn’t see it but began to assume I was delusional and that, despite my best efforts, none of my four children looked like me.

My younger three are away with their dad at a family cabin in the Poconos and my daughter texted me a picture she’d taken of a framed photo sitting on a table of the extended family, circa 1991 and at first, I wondered what my son was doing in the photo (given he was not born until the following year).

And then I realized it was me. I looked like my son in drag. I was like the LaToya to his Michael.

This was before I started fiddling with things, like my eyebrows and hair color, so there I am with short, dark brown hair and thick eyebrows. I’m only a year or two older than my son is now, so I still have that fuller, baby face and not a stitch of makeup.

I even forwarded the text to my son at work and his initial response was, “Where am I?”

“Haha that’s freaking me out now,” he answered.

I sent the same picture to my girlfriend who was more interested in my ex-husband in the photo, in which he’s looking off to the side with his hands stuffed in his shorts pockets and appears ready to flee at any second.

But I can see our son in him, too. Our child inherited his father’s swagger; his inherent coolness. So that’s probably what people see, when they tell me they look exactly alike. They sense a vibe that goes beyond Hazel eyes and shaggy brows.

It’s funny what you end up passing along to your children. The good things – like long legs – and the bad – like cheap Irish skin. I see my own personality and inherent weirdness in some of my kids, but it’s cloaked by big blue eyes and curly hair.

I just feel vindicated that — despite all those months of gestation and all the hard work getting them out of my body —  I finally have proof that one of them is actually mine.

2 thoughts on “Michael and LaToya”