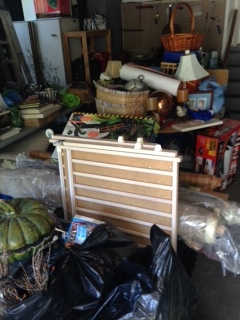 In a moment of inspiration – or perhaps after watching one too many episodes of Fixer Upper – I decided to start clearing things out of my kitchen cabinets and basement last weekend.

All I can say is: Holy hoarder.

In the span of about 24 hours, I uncovered the following items:

I am going ahead and throwing a lot of stuff away — like the crib mattress and broken items. But have a hard time tossing perfectly good items so have tasked my 17yo with organizing a garage sale in a couple of weeks to help ease my conscience. I need to hurry though because last time our garage was really cluttered we found a cat and now she lives in my house and owns a Snuggie (we actually found a garbage bag full of those, too).

I had my girlfriend across the street come over to check out all the crap that had migrated to our garage and thought she was going to go into shock at the sight of it all. She’s a purger. A minimalist. She’s always cleaning something out and has about three items hanging from the rod in her closet. I had enlisted her to help me let go of all that stuff. Things I thought I needed as proof. As if all the memories living in my head and my heart weren’t enough.

She can be brutal.

I pulled a hand-painted glass cake dome out of one of my kitchen cabinets and as I stood atop a stool and admired it – remembering where it had come from and how I treasured it 20-something years ago – she walked over and plucked it out of my hands and set it down on the table along with other items to be weeded out of my house.

“Say good-bye,” she said as she walked away.

10 thoughts on “Memory Hoarder: How to Let Go”