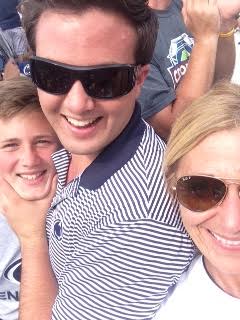 Me and the men in my life.

About six weeks in, I continue to be amused by the shift in my surroundings. Or, more accurately, life with a big helping of sons versus a life sprinkled with daughters.

I took my two lads – 22 and 12 respectively – to visit their sister at a giant university at a nearby state to see one of their legendary football games.

There was a marching band. Cheerleaders. Dancers. A tumbling mascot. Waving pompoms in the stands and fireworks each time the home team scored. Yes, fireworks exploding off the tops of the two scoreboards flanking the field.

It was pretty epic.

I had downloaded the new Mindy Kaling audiobook to listen to during the over four-hour drive there and that was my first mistake. Because while my little guy – who spent a lot of time surrounded by just women when his older brother was away at school and thus is familiar with and open to the funny lady canon of books we all like to listen to – my oldest son was like, “Absolutely not.”

He somehow missed that feminist boat.

So instead we listened to mutually agreed upon music. Billy Joel’s “Billy the Kid” and Elton John’s “Tiny Dancer.” Some Kings of Leon for good measure.

It was a far cry of all the sugar pop tunes my youngest daughter used to play for us on road trips. All that Beyoncé and 1D. One trip we listened to the entire “Frozen” soundtrack twice and belted out dramatic interpretations of “Let It Go” (although my grasp of all the words to the song is lacking I make up for it with plenty of feeling).

We got into State College and grabbed my girl and had a great dinner but the boys balked when we wanted to do a Wal-Mart run and load up on paper products and chips for the next day’s tailgate. “Why do you always need to shop?” they grumbled.

But the real dividing line separating life with women versus life with men came when me and the boys crammed into our Hampton Inn room for the night and the effects of their massive pizza burgers moved through their digestive systems. And I’m not saying we don’t all have to move our bowels and all that (Everyone Poops, you know), it’s just that things got real smelly, real fast. Like, I had to employ the fancy Oribe hair texturizing spray I probably spent over $20 on as a makeshift air freshener to keep the room from smelling like a barn.

And for some reason, dudes can’t share beds. The girls and I would squish into double beds in hotels and make do (well, actually, I make it a point to never share — I am paying after all — but the girls deal) but the boys could not abide and my little guy ended up sleeping on the floor between the beds that first night and we called down for a cot the second evening.

But the next day made it all worth it.

My brother, an alum, made the drive from his new house about 90 minutes away and we got the full tailgating experience, including a spot in the parking lot a stone’s throw away from the stadium. My daughter joined us with a few of her new college pals and we drank cans of beers as my brother manned the grill. We played KanJam and listened to music on a wireless speaker. And about an hour before kickoff we packed up and headed inside to watch the team warm up and then see them come onto the field for the game (cue the fireworks).

After the game (we won) we walked into town and the boys filled up on chicken wings and pizza piled with sausage and sliced jalapenos and you can imagine how that exploded in their digestive systems.

The next day we availed ourselves of the free breakfast situation at the Hampton Inn where I ate a banana slathered with peanut butter and the boys made Belgian waffles topped with sticky syrup and a big dollop of whipped cream with a side bowl of sugary cereal for good measure. Before we headed out, my oldest asked if it was okay if he drove home and reader, it’s been a long time since anyone has driven me anywhere (although recently the kids’ dad drove the car home after we dropped our daughter off at school). It was nice to just sit in the passenger seat and close my eyes. It even took the edge off listening to the likes of Arctic Monkeys and Drake.

The fun thing about all this is that I now know that nothing lasts forever. My time in Manville is just another chapter in my life. I’m sure within the year my oldest boy will move out on his own, only to be replaced by his sister who graduates from college in the spring. Then the estrogen levels will again outweigh all that testosterone that’s flowing around here.

Maybe then I’ll finally get to listen to Mindy Kaling.

4 thoughts on “Me and the Boys”