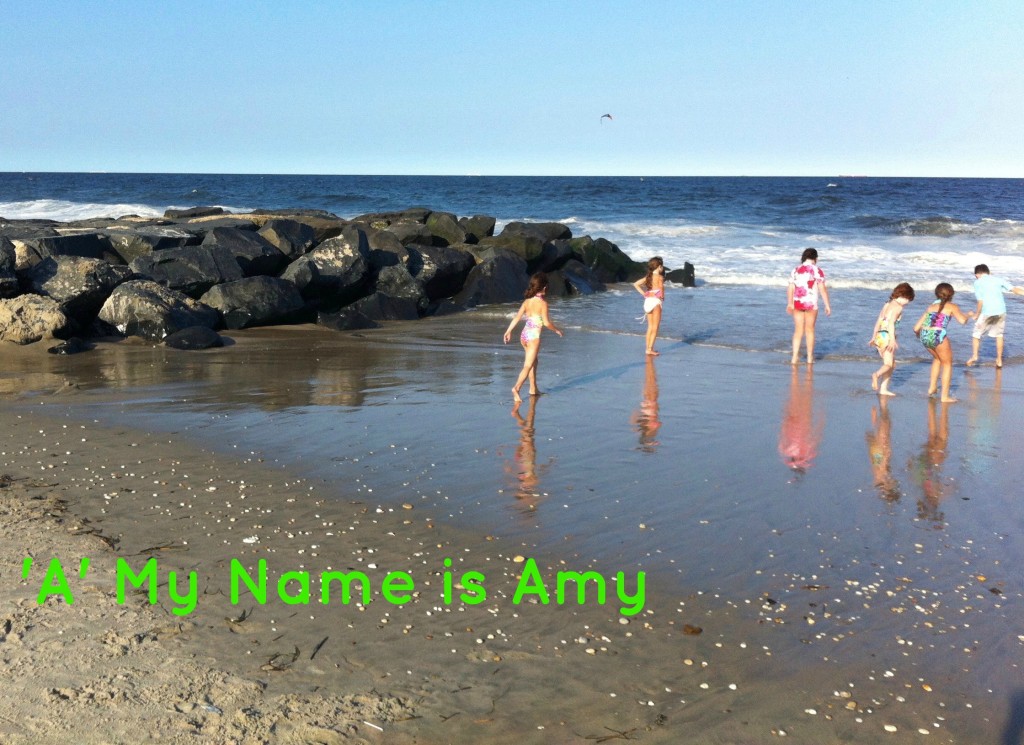 Here’s a story about finding your place, and a little magic, on the sand.

I saw a little piece of magic this weekend, right here on the Jersey Shore. Something that reminded me, not for the first time, that I am right where I’m supposed to be.

The celebration of our nation’s independence stirs up a lot of emotions for me. I mean, when you’re divorced, all holidays kinda suck, but the Fourth of July a few years back marked the end of my almost 18-year marriage and the beginning of a whole new way of life for our family. It’s become the delineation between our “before” and “after.”

For me, that means I no longer spend my summers at the hoity-toity beach club where we raised our four children – our days filled with swim team practices and tennis lessons and where beach boys set up your chairs and umbrellas – to a much more low-key situation about a half mile down the beach to the south. There’s a snack bar, bathrooms and a pool but parking can be challenging and I now own a rubber mallet to help secure my own beach umbrella.

Honestly, that fancy beach club – with its dramatic arches, mullioned windows and black-and-white-tiled ballroom – was probably one of the reasons why I stayed married for as long as I did. It was a part of my super-shiny identity. You know, that part of me that secretly loved the club’s parking sticker on the front bumper of my car and Sunday happy hours in my oh-this-old-thing Trina Turk cover up. Or humbly telling folks, when asked, that the exclusive club was where I planted my umbrella during the summer months. Oh, you know. NBD.

But it’s also where I hauled my children – and their playpens and buckets of toys and our cooler filled with juice boxes and ham sandwiches with neatly trimmed crusts – every single summer day for 15 years. Seriously, I was like a pack mule. We’d set up camp in the morning and stay until dinnertime. I was the boss at getting babies and toddlers to nap and later, I’d carry them into one of the club’s shower stalls and rinse the sand from all their chubby little nooks and crannies before heading home for the day.

As the kids got older, there were early-morning swim team practices and tennis lessons later in the afternoon and then swim meets at night. The kids would go to bed sunburnt and exhausted and – aside from the sunburnt part – I’d felt like I’d crushed my job as a mom that day. And then we’d get up the next morning and do it all over again.

One of the more interesting dynamics of this club is that members sit with their families on the beach or – if you were so blessed – in front of coveted cabanas lining the boardwalk. As my then-husband’s parents were the original members to the club, we spent our days sitting with his family. We’d sit in a circle on the sand or watch the kids together up at the pool and a lot of times, sit together at dinner in the club’s Tea Room overlooking the ocean. And honestly, I didn’t hate it. I mean, I’d complain sometimes and roll my eyes behind their backs about this or that but really, I could do the same for my own family. Probably your family, too. We’re all a little annoying. A little bit crazy.

But I spent many a pleasant summer afternoon sitting with my former in-laws, taking turns filling inflatable pools with big buckets of ocean water for toddlers to splash in and chatting and reading the paper. The ladies would talk about the books we were reading or the trials and tribulations of raising children and the men would dig holes and play basketball on weekend afternoons (while the women back on the sand watching the kids noted how annoying that part was).

The years went by and the kids grew older and those traditions became woven into the proverbial fabric of our lives. We had the sweatshirts, trophies and the kids’ names engraved on the plaques that line the club’s walls to show for it.

When my marriage ended, I fought hard to stay at that club and help maintain those traditions. I reasoned that even though the marriage fell apart, everything else in my children’s world didn’t have to. I’d been down that road when my own parents’ marriage dissolved 30 years earlier and didn’t want my kids to have to experience the same type of disruption in their lives. The abrupt end to everything they knew before the fall.

Sure, their dad would still be a member, but he worked full-time and – if we’re being really honest here – I was the glue that kept all that family stuff together. I embraced his family and made their traditions ours. And a big part of that was the beach club. And at the time, I still had four kids from about 5 to 15 to entertain for four months out of the year.

But neither the powers-that-be at the club nor, sadly, my in-laws subscribed to that broader type of thinking. They were all immune to the idea that divorce doesn’t have to end a family. That it could be, instead, a different way of being a family; a group of people who, despite the lack of a marriage license, still care about each other after years of sitting around and talking in the sand.

Instead, lines were drawn and sides were chosen and I was left looking for a new place to park my beach chair.

So I headed south and fell into the big, wide safety net held up by my new beach family. The men and women who made room for my beach chair in their circle and offered me their company – not to mention some super-spicy margaritas – when my going got tough.

Sitting in that circle in the sand this weekend I thought about how far I’d come in the six summers since my marriage ended. How, at first, I felt so out-of-place sitting on that new beach as a single person. I felt like an intruder among the couples. I mean, I didn’t even know how to put up my own umbrella. Back then, I figured it was as good enough place as any to bide my time and besides, my youngest was thrilled to get to spend his days in the ocean with all his friends.

But now we’ve logged a lot of hours together on the beach, bonding while kids swirled around our circle, looking for towels and fins and money for the snack bar. We save places for each other in the sand and talk about our kids and what we’re reading and roll our eyes at the guys and come back the next day and do it all over again.

As the sun began to set on Sunday, I noticed a couple of kids running to stand at the shoreline and point towards the ocean. I turned and saw a fin rise out of the darkened water before slipping back down and soon we were all on our feet watching a line of dolphins swim north past us, close to shore.

We oohed and aahed as they began undulating a little higher out of the water, exposing more and more of their sleek gray bodies. And then, as if on cue – as if the animal knew an audience stood gathered on the beach watching the parade go by in wonder – one of the dolphins jumped completely out of the water and gave its tail a shake before plunging nose first back into the ocean. The crowd erupted in hoots, turning to each other in amazement, as the pod continued to make its way north under the setting July sun before we all settled back into our chairs to wait for darkness to arrive.

And I have to believe that the dolphin’s thrilling leap was a sign from the universe that there is magic around every corner – no matter where your umbrella is planted – and that I was right where I was supposed to be, on a beach in New Jersey surrounded by friends on a warm summer night.

Looking for magic? Well, actually I’m not really a magician. But you can sign up to get all of my latest posts sent right to your inbox by typing your email into the box below. And that’s kinda magical. You can also follow me on Facebook and Twitter.

23 thoughts on “Magic on the Sand”