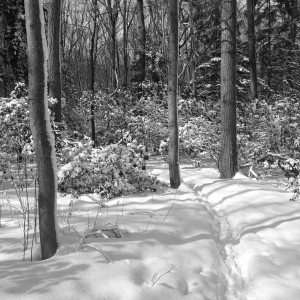 My friend and I trundled into the back of the pickup truck this morning and when the driver closed the door behind us, she turned to me and said, “Well, say good-bye to your life.”

“I almost made it to 50,” she snorted and then we tried to pull it together before the driver got in behind the wheel.

It all started innocently enough. She needed to be at her pediatrician’s office this morning at 10:00 with her son so we bundled up for an early morning snowshoe trek and headed out in her car at 8 a.m. for the woods.

It’s a place I know well and have been visiting a few times a week for the past five or six years. When I was younger, it would be in a pair of shorts and a tank top to run up and down the wooded hills with one or two girlfriends while we panted and shared some of our darkest secrets. We were definitely applying the, “What happens in the woods stays in the woods,” approach to over sharing in those days.

It was running along a trail one day when I stopped short and broke down sobbing, telling my running mate that my marriage was in big trouble. The woods became the place where I ran away from all of my troubles. The leaves and trees swallowed me whole, shielding me from all the scary shit raining down on my head on the outside. It was where I escaped.

After I determined that needing to run through knee pain until the joint went numb was probably not the smartest thing I could be doing for my body, I went to the woods a few times a week with a friend and our two big, goofy dogs and we’d let them off their leashes so they could tear ahead of us on the path and then turn and run back to see what was taking us so long. I swear, my dog would be grinning from ear-to-ear during those long, woodsy walks together.

When Rudy, the finest dog a girl could ask for, moved onto the big wooded trail in the sky, I continued to walk up and down the dirt hills with friends, our conversations shifting over the years from divorce, to work, dating and SATs. And our periods. We’re always talking about our periods.

There’s been very little that’s kept me away from the woods for more than a week or two each year, and that was mostly because of rain or snow. But I found a way around the latter last year when my neighbor and I bought ourselves snowshoes off of Amazon after the first or second snowstorm of the season. 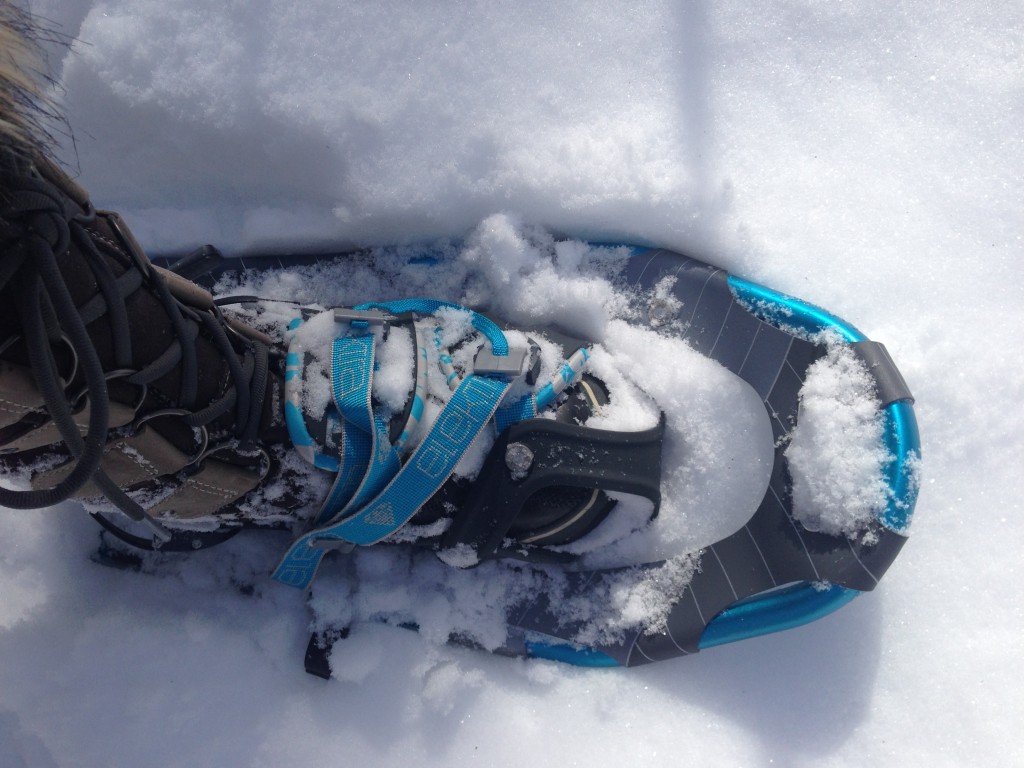 We marched around the trails I had spent years running along in shorts and sneakers and then my pal went all Pocahontas and shifted off the marked trails and we ambled through brush and branches for a bit until we somehow ended up back in the parking lot.

We even started exploring another nearby wooded park, which lacks the steeper hills but makes up for it with windy paths and narrow hollows. But we’re not as familiar with those trails and, frankly, they don’t seem as well marked as those on our usual walk.

At least that’s what we were telling ourselves this morning when, after about an hour and a half of walking around the cold woods we could not find our way back to our car. We kept coming to splits in the trail and trying to determine which icy and snowy path would head us towards the parking lot. We’d start to trudge down the path for about 10 minutes and then see something up ahead on the trail – like an open field or the back of someone’s house – that we knew did not look familiar. That told us we were heading in the wrong direction. So we would turn around and start heading in the opposite direction.

Here’s the terrifying truth: I have absolutely no sense of direction. Like, it’s kind of sad and I think something that should be filed under “Amy’s Many Learning Disabilities.” I can’t tell you how many vacation days were ruined with my ex-husband as he drove through some foreign locale while I sat beside him with a map on my lap trying to be the navigator. My cluelessness combined with his impatience left us silent and fuming.

So, I can’t find my way out of a paper bag and it turns out my snowshoe mate, a very smart girl who put herself through law school and listens to “Crime and Punishment” while driving around, is equally impaired. We stood on a path and studied a PDF of the park map I had pulled up on my iPhone and tried to figure out which “P” represented the parking lot where we parked. I mean, the basics, people. We could not even figure that out.

Eventually we ended up clear on the other side of the woods at the park’s activity center. I’ve been there a million times over the years with my little ones to walk through the reptile house and watch one of the Copperheads slither through its tank or a turtle listlessly flap its arms in a few inches of water. We spent many fall afternoons walking the nature hike, turning logs over in search of salamanders our oldest daughter would snatch up and admire, and where our oldest son had his fifth birthday party and we saw a stick bug up close.

My pal and I decided we officially needed help and slipped off our snowshoes and walked down the stone path to the main building and saw that it did not open until 10 a.m.

That’s when we started yelling for help.

Okay, maybe that was just me.

But while I was yelling, “Hello?” into the darkened reptile house, my pal caught site of movement behind the building and ran over to see if she could get someone’s attention.

And that is how we found ourselves being shut into the back of a county vehicle by a man who initially – I have to be honest – made us a little nervous. I mean, we were relatively smart women who knew that getting into a car with a stranger was not a great idea. But we were cold and pretty hungry and tired of clomping along the seriously icy trails. We were willing, apparently, to take the risk.

It turns out that Ron – that’s our driver/hero’s name – was a very nice man who works for our county park system. He told us we had strayed pretty far from where we had parked and offered to give us a lift. As he drove the windy road back to our car, he told us how challenging this winter had been and how he’s had to wear a face mask lately to clear the snow and ice from trails because of the single-digit weather we’ve been plagued with here in New Jersey.

We climbed out of his cab and thanked him for keeping our parks so beautiful and got into our car and started laughing our butts off and blasted the heater.

So maybe our next purchase off Amazon should be a compass. Or a Sherpa. Do they sell Sherpas on Amazon? Maybe we’ll have to go to Target for that. 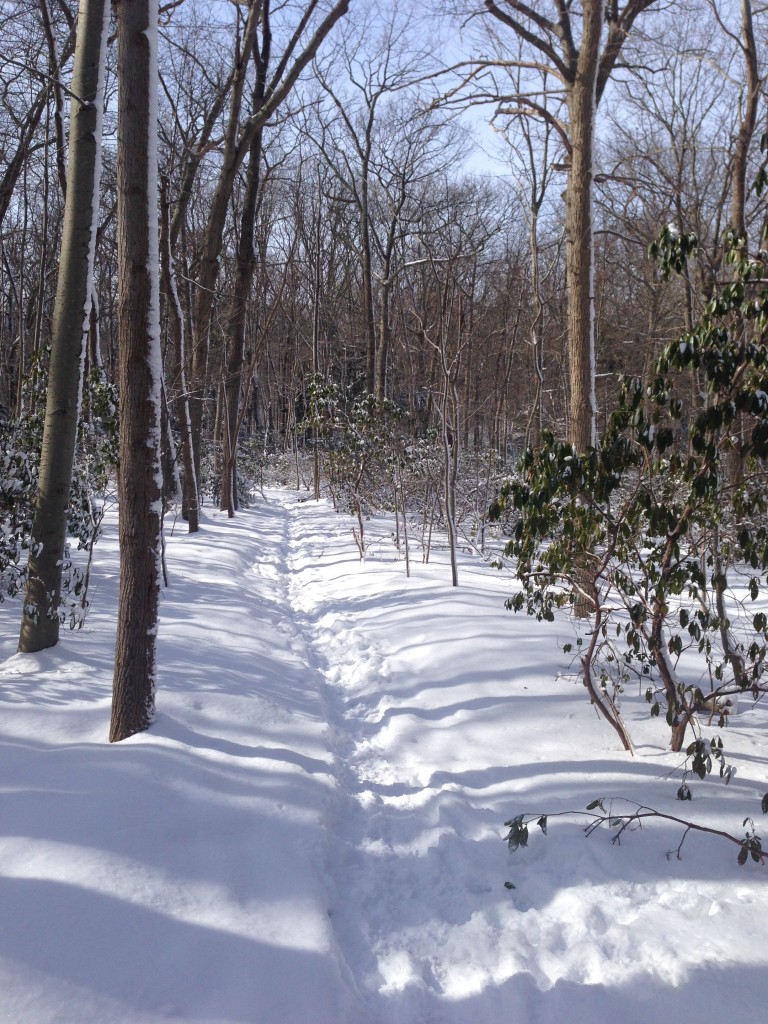 Here are some directions I’m really good at!