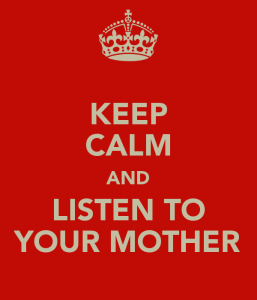 This is what I am fucking sick of: People with opinions.

Not you. You can have all the opinions you want. I mean, I’d prefer it if you kept them to yourself — especially if you watch a lot of Fox News — but I am open to people having beliefs other than my own, as long as I don’t have to agree and pretend you are not crazy.

No, it’s really the people that I gave birth to whose thoughts, feelings and beliefs I am not really interested in hearing about, especially when they are in direct contrast to what I am trying to accomplish around here.

I just want them to shut up and do what I say. Toe the fucking line. Like the good old days.

In the good old days — back before they were teenagers — when one of the kids would start to act up and resist what I wanted her to do, I would just start counting to three and she’d quickly relent and come around to my way of thinking.

“Fine,” the would-be offender would say, and skulk away in defeat.

That method remained effective for years. It wasn’t perfect – sure, we had our share of little ones shoplifting Beanie Babies I wouldn’t buy for them and soap in the mouth of an 8-year-old for saying an offensive word – but overall, counting to three really worked for me.

It still worked when my oldest child was in his early teens and I couldn’t get him out of the ocean to go home one sunny summer day. You know that trick, when the kid pretends he’s having so much fun bobbing up and down in the water that he doesn’t notice his mother screaming and waving her arms from the shoreline about 10 feet away? Anyway, that was what was happening that day, but then we suddenly made eye contact and I held up my pointer finger and mouthed, “One!” and he quickly started to make his way out of the water.

“I don’t even know why I’m doing this,” he said as he passed by me to get a towel. “Like, what are you going to do when you get to three?”

So even while the oldest three kids started to drift from my family action plan – coming home on time, saying “No” to drugs and getting straight-As – I could always count on my little guy to toe the line. He was young enough that he still happily drank my Mommy Kool Aid.

But lately, as he starts to inch closer to 12 than 11 and prepares to enter the sixth grade, the kid is starting to get a little sassy. And unlike with his three older siblings, I no longer tell myself that it’s a passing phase. It’s a sign of things to come, and frankly, I don’t really have the energy to try to break one more person’s spirit.

Case in point: Yesterday I was driving my youngest child and his two friends – our neighbors who are leaving for Hong Kong in two days – to the beach. I wanted to stop at the ATM and get some cash so he could go buy himself, like, a $3 Coke or $5 fries at the snack bar to live it up during his friends’ final days in New Jersey.

“Do we have to come in?” he asked and I told them they could sit in the car and listen to Z100 while I ran into the bank. Unfortunately, I failed to mention not to touch anything while I was gone since I have issued that disclaimer so many times in the past, I did not see that it would be necessary in this instance.

I run in and find myself behind a young woman who did not wish to avail herself of one of the tellers sitting around and chatting to make her deposit, but rather go through the lengthy process at the ATM and causing the rest of us to stand and watch her slowly press whatever needed to be pressed and feed envelopes into the machine to complete the transaction. My turn finally came and I am so good at taking cash out lately that I zipped through the process and was stuffing the cash into my wallet as I walked down the sidewalk to my car when I heard the sound of a key turning in the ignition and realized it was my own vehicle being started.

Now, unlike my older children – who didn’t even touch the car keys until they started to learn to drive — my 11-year-old is well versed in how to turn the car on and off and I’ve even let him steer down our street and into the driveway on occasion. Since his older siblings have gotten into so many accidents already in their driving lives, my new strategy is to get this little one as comfortable behind the wheel as early as possible to hopefully avoid similar situations and $500 deductibles.

My son was returning to the passenger seat as I opened the door and I asked him what he was thinking about, knowing perfectly well that he was just being bossy and trying to show off his car-starting skills to his friends.

Did I mention it was August in New Jersey?

Then I looked in the backseat and saw the two friends looking a little more moist than when I had left them five minutes earlier, their hair damp and sweat building under their eyes, and I kind of freaked out.

“What?” my son responded, and I could tell by the tone in his voice, he was not remotely sorry as he kept telling me to calm down.

“Do you know how much trouble I could get into?” I yelled. “I mean, the police station is literally in the same parking lot!”

Sticking to his guns, he said, “Mom, what’s the big deal?”

And because he probably hasn’t been reading in the newspaper lately about all the moms getting into big trouble for leaving kids in cars to run into 7Eleven and stuff, he had no idea the ramifications of someone walking by and seeing three middle school-aged boys sitting in a hot car with the windows rolled up and Iggy Azalea blaring within on a hot, sunny day in August.

And all I wanted to scream, as he continued to talk back to me and argue his point, was, “Just do what I fucking say.” If I say, “Don’t turn the engine off and sit in a hot car in August,” I don’t want to fucking argue and debate whether or not that’s a good idea. If I said it, it’s pure genius.

I guess the point of this rant is that I can see it coming, that shift from agreeable child to contrary teenager. The days of my fourth child doing something wrong and remorsefully saying he was sorry are just about behind us. I am no longer delusional and under the impression that it won’t happen to my kid, that my kid won’t go down that path of angst. They mostly all do.

I was complaining about his newfound freshness to his sisters and they immediately pointed the finger of blame at yours truly.

“You’re a terrible power figure,” said Daughter #2, insisting her brother listened to her because she was much scarier than his own mother.

“You literally raised him with no concept of ‘No’,” said the oldest daughter, probably still smarting from having to return that Beanie Baby to the store after I found it stuffed at the bottom of her sister’s stroller as we piled back into the car all those years ago.

But I know better than that. I’ve been the bad cop and I’ve been the good cop and in the end, don’t think it really matters. The change is as inevitable as underarm hair and zits.

I guess I’m just not in the mood.

One thought on “Listen to Your Mother. Thank You.”