I spent the first half of my life trying to be cool so it’s kind of interesting that I’ve become such a geek in mid-life.

And while I think my affinity for show tunes, talk radio, Hobbits and comic books had been ingrained at an early age, I spent a lot of time back in the day trying to temper such nerdy impulses with cigarettes and attitude.

But now I am too old and busy fighting about curfews and telling certain people to put on a sweatshirt to keep those appetites in check.

So when a friend asked me last week if I wanted to go with her to see a recording of the NPR game show “Ask Me Another” in Brooklyn, I was like, “Duh!”

Because that show, my friends, is the perfect storm of geekdom. It combines the amazingness of public radio – and shows like “This American Life,” “Fresh Air” and “Prairie Home Companion” – with the thrill of game shows.

It’s smart and funny, qualities I admire beyond compare.

Game shows were staples of my childhood, squeezed throughout the day on TV in between “Captain Kangaroo,” reruns of “Here’s Lucy” and “The Edge of Night.” I loved seeing all the crazy stuff women would pull out of their purses on “Let’s Make a Deal,” how handsome Chuck Woolery was on “Wheel of Fortune,” how sophisticated the celebs on “Password” seemed and the bawdiness of “Match Game” (Charles Nelson Reilly!).

For some reason, the game shows on TV today don’t seem to match the unpredictability or smartness of the old school shows. For that, you need to turn on the radio.

Which is something I do quite often, especially on the weekends when I can catch the latest episodes of “Wait, Wait Don’t Tell Me” and “Ask Me Another.” The former is an hour-long show featuring a revolving panel of semi-celebrity comedians (Paula Poundstone or Mo Rocca), regular-people contestants and a bigger celebrity du jour (last week was Steve Martin) to answer questions based on what was in the news that week and is taped before a live audience.

“Ask Me Another” brings in contestants for a fun series of word games, sometimes accompanied by song. There is a regular hostess and two side-kicks and all are seriously quick-witted and seem to be having lots of fun.

We made the weirdly-easy ride to the Bell House in Brooklyn Monday night to see this week’s show and cheer on my friend’s nephew who was a contestant. The venue was a pretty dive-ish, hipster spot a stone’s throw from the Gowanus Expressway and as the rest of the audience began to file in, I started to realize just how young the show’s demographic was.

That was confirmed later as we were seated in our aluminum folding chairs, enjoying a plastic cup of fancy ale, and the women seated in front of us got all jazzed when the celebrity for that night’s special Halloween show, author R.L. Stine, was introduced. 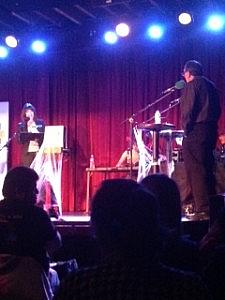 R.L. Stine playing along with Ofira Eisenberg on NPR’s “Ask Me Another.”

Stine, who goes by “Bob,” seemed like a very affable man and quite unlike whom you might imagine conjures books for children like “Say Cheese and Die,” and “The Haunted Mask.” That series of Goosebump books – and their frightening covers in particular – terrified my oldest when he started reading in the late 1990s and had to be banished from his room. 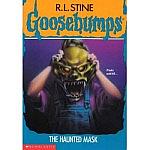 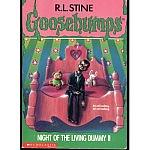 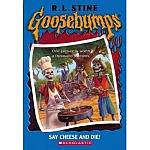 But the girls sitting in front of us, probably in their mid- to late-20s, were apparently huge fans and whispered ferociously among themselves and nodded every time a new book was mentioned.

We were a big room full of dorks, young and old, playing along with the contestants and enjoying a good double entendre and funny song lyrics.

But it’s hip to be a square now, all the cool kids are geeks. Isn’t that the cornerstone of, like, Brooklyn culture?

And I’m happy to have passed down my dork gene to my kids and enjoy when they choose to wave their weirdo flags. I love that one of them worked seriously with Legos well into high school and never says “no” to a round of Boggle. That another daughter reads everything she can get her hands on and can be heard at all hours howling at “Who’s Line is it Anyway?”. That same girl also crammed like who-know-how-may-years’ worth of “Dr. Who” episodes into her senior year of high school and is now the proud owner of a home-made TARDIS that actually lights up. And I loved that my oldest son read for pleasure for many years until he became, well, too cool not to. They’ve all played instruments — with varying degrees of success — and the boys in particular took to the saxophone.

They’re activities that foster creativity and intellectual curiosity, something we could all use more of.

Because in the end, being a nerd is much smarter, and healthier, than smoking cigarettes and much less expensive, too.

I just wish it didn’t take me so long to figure that out.

5 thoughts on “It’s Hip to be Square”