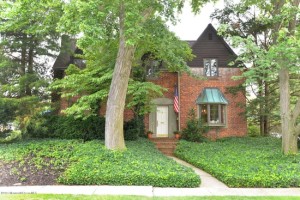 Be still, my heart.

Lo and behold, I bought a house. Well, first I sold my old house, and then I bought the new one. And on a scale of 1 to 10, if we had to rate the events in our lives that caused us the most amount of stress – with divorce being a full-on 10 and middle school basketball games clocking in at about an 8.5 – I’d put real estate transactions right up there at around a 7 and change.

Seriously, what’s really going to do me in is the packing up my home of 13 years to move – which I’d peg at around Stress Level 8.5 – and trying to fix up my new home prior to the movers getting here. In other words, I need to get it from the war-torn state it’s currently in into something that at least we can stack boxes and furniture (but more about that another day). I’d pin that at a solid 9.5 on the Life Richter Scale.

So I’ve been busy and have a lot to tell you about, especially since I hadn’t felt comfortable publicly discussing any of my real estate transactions as they transpired throughout the fall. First of all, I didn’t want to jinx the deals and secondly, I didn’t want anything that I wrote to be misconstrued by either my buyers or my sellers because – unlike other real estate transactions I’d been involved in in the past — everyone played very nice. And I’ve come to the conclusion over the last few months, after tons of phone conversations, texts, Facebook messages and emails, that this was because all parties involved were basically very nice people.

We live in a small town of about 6,000 people, so you kind of have to be nice. Or at least it’s really in your best interest. At some point, you’re going to be standing on line with them at the deli counter or getting your nails done at the next manicure station and probably you want to avoid those awkward moments. Plus, not being an asshole is so much easier than the alternative.

I put my house up for sale by owner in July and after some initial excitement and a bustling first open house that brought a lot of looky-loos, interest kind of petered off. I mean, the house had never been cleaner or looked better, but the kids got kind of sick of having to go out to my car – which is where I shoved any signs that 5 people actually lived in my house, like dirty laundry and piles of bills and magazines – to find anything. At one point my younger daughter came in and said, “Mom, there are literally spider webs growing in the back seat.”

But, aside from one offer early on, that wasn’t exactly where I wanted it to be but gave me good negotiating experience, couples – husbands and wives, moms and daughters – came and went. They oohed and aahed and told me how gorgeous the house was, and then I never heard from them again.

But by September I had very interested buyers and we began the whole real estate dance, which was interesting because they had also chosen to forgo using a realtor. And that right there makes you have to be a little nicer throughout the process. You have nobody to hide behind because you have to talk to these people face to face. And man, I’m way too lazy to be unreasonable. It’s just easier when you’re willing to make compromises in order to seal the deal.

The one interesting wrinkle was that English is not my buyers’ first language as they moved here from a European country. So I really had to make sure during our negotiations that we were on the same page and saying the same things. I found myself often repeating what they’d said or saying things like, “Okay, what I’m hearing you say is blah, blah, blah.” And we’ve done great – other than when I took their use of the word “free” to mean what “free” means in English, in that there was no money involved, but they meant something entirely different. But by mid-fall we were under contract and ready to roll.

That’s when I needed to find myself a new place to live.

Here again is where buying and selling a house is a lot like dating. When I first saw the house I ended up buying, I was like, “Meh.” I couldn’t see past the small, dated kitchen and lack of a garage. I was too busy being enamored with little capes in town with fancy stoves. I was totally ready to pull down my pants and throw all my money at those shiny little houses with Wolf gas ranges.

But right before I did that, I went back out to look at all the homes in town in my price range but this time, I brought my very smart friend who saw my new-house-to-be with much clearer eyes. Instead of being snagged by wallpaper and paint colors, she pointed out the casement windows surrounded by thick glossy trim and the giant master bedroom. The house was built in 1929 and is unlike many of the homes in our town and while it lacked a shiny new kitchen, it burst with character. But most importantly, the family that had lived there for almost 40 years had taken impeccable care of the house and it boasts a fairly new roof and super-smart additions they built over the years. It might not have a garage but in its place is a nice sized family room and second fireplace.

And so I went from feeling really blasé about that brick house on the corner to getting a little tingly every time I thought about it, which is the way I believe all good romances should begin. Beware, I say, of shiny strangers dazzling you with Viking stoves so that you don’t notice the dearth of bedrooms or lack of a basement. Focus then instead on something that’s solid with a good foundation, that’s oozing with charm and could use just a little updating. The smart and funny, say, over the good looking and athletic.

But always keep your pants on because that never solves anything.

So I scooped up that adorable brick house on the corner and ever since, many people I’ve run into have told me it’s one of their favorite houses in town. It’s in a great neighborhood that’s filled with kids for my 13yo to play with and a quick walk to school and the local pizza place. I could even walk to the liquor store in a pinch.

After the flurry of excitement of the home inspection and bringing my mom and sister through to get their seal of approval, I was relegated to looking at pictures of the house on Zillow throughout the holidays while we waited to close. Closing dates came and went while I spent hours slipping down Pinterest wormholes to find just the right color for my bedroom or wood floor stain.

In fact, if anyone was a dick throughout the real estate process, it was me. My mortgage got held up in the end, causing my sellers a delay on their own new home purchase, so I was hesitant to see them at my walk through on the day I bought the house. But I walked through the front door, in the midst of movers carting out all of their belongings from the home they’d lived in for almost 40 years, and was promptly embraced by one of its owners. She told me she was glad I was buying it and when I came back to the house as its new owner a few hours later, I found a Hallmark card that they’d left atop a pile of booklets for the various appliances congratulating me and wishing my family and me many happy years there along with all their contact info, just in case.

And for the first time in my adult life, I find myself packing up for a move and not wondering where I’ll move next. Already mentally pulling up stakes for something bigger or better. I remember being annoyed when my former husband announced that he was planning to die in the second of three housese we’d bought together. I didn’t understand back then why someone wouldn’t want to keep reaching for the next thing.

But now I get it. Now I am kind of in the same boat. After years of thinking I wanted the bigger and the better – at first the house and later perhaps moving some place entirely different – I find myself exactly where I am supposed to be.

And it feels just right.

22 thoughts on “In Which I’ve Become Goldilocks Or: Everything is Just Right”