I don’t know about you, but I’d almost forgotten about Renee Zellweger, she of Bridget Jones and Chicago fame. But that probably should come as no surprise since I consume a steady diet of Hollywood’s newest and hottest starlets fed to me through my dedicated reading of People and Entertainment Weekly magazines and watching schlocky Extra and Access Hollywood on TV most nights (Mario Lopez and Billy Bush are like the Dan Rather and Walter Cronkite for the celebrity set). There’s always somebody newer, hotter and fresher to admire and scrutinize.

So Zellweger’s name caught my eye yesterday as I was scrolling through Facebook but the picture I was looking at didn’t quite match up to the actress I remembered. The woman didn’t even look like she could be a sister, much less a cousin, once-removed of the Oscar-winning actress. 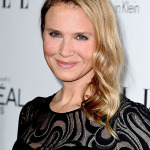 Not 24 hours later and Zellweger, 45, is everywhere: the aforementioned Extra and Access Hollywood breathlessly reporting how her appearance at an awards ceremony set off a firestorm of speculation about the extent of work she has had done to her face. The story is all over the Internet and the Today Show (ack, what happened to the Today Show?) could not get enough of this very important issue. Matt Lauer even had Bill O’Reilly – there to discuss his new book on Patton – give his two cents on the issue (probably the only time I’ve ever agreed with the old gasbag).

“They’re not reporting on the issue,” noted my very smart friend, “they’re creating the issue.”

I wonder what the great newsman Ben Bradlee, longtime editor of the Washington Post who died yesterday, had to say in the end about what is considered news nowadays. Scroll through the home page of Today.com and you can read all you want about “Best Baby Bump Style” and “4 Moves to a Great Butt” (I shit you not), but find not one word about Hong Kong or ISIS.

Women in their 40s are fucked and we don’t even talk about anyone in their 50s so I guess we just slink off somewhere to pluck our chin hairs and wait to shrivel up and die.

And you don’t have to be a movie star to feel the pressure to hang onto youth and beauty for as long as possible. Even unemployed mothers of four living in suburban New Jersey succumb to a multitude of treatments to stay fresh. To look the way I do requires gel manicures, pedicures, haircuts/color/straightening, waxing of brows/lip/bikini area. Then there’s the monthly facial, the guy who comes to work out with me at my house twice a week and my face may have seen a needle a time or two.

That’s not even counting all of the lotions and potions sitting in a basket on my bathroom counter that I smear and splatter all over myself  to encourage my skin to retain whatever elasticity it has left.

And I make jokes that I have to keep myself together since I’m single and have so many kids. That I have to have one thing – other than thin ankles – going for me.

I said as much to my girlfriend this morning as we discussed Zellweger while squatting with 20-pound weights (the irony). “Yeah, but I do all that stuff too,” said my pal, “and I’m married.”

Even the great Anna Quindlen – my long-time professional and personal hero, who famously wrote, “The life span of women in our society is divided into three stages: pre-Babe, Babe and post-Babe” – has admitted to using Botox (like it’s a narcotic or something).

Another pal and I were talking not long ago about Botox and how she was told by a friend that she better start including the procedure in her maintenance schedule or she was going to look like shit compared to everyone else.

“Why can’t we all just agree not to go there?” she moaned.

But, as Zellweger has proven, things are going in the opposite direction. Botox is just the gateway procedure leading to the harder treatments like lasers, fillers, eye and neck lifts.

Why can’t we all just channel Meryl Streep, who called our push for actresses to stay young “Victoria’s Secret Syndrome” in a 2008 Good Housekeeping article?

“I just don’t get it. You have to embrace getting older,” said the now-65-year-old actress. “Life is precious, and when you’ve lost a lot of people, you realize each day is a gift.”

Society tells us that we’re nothing if we’re not babes and I can tell you, at 48 and wallowing in the final days of my own babedom (or maybe the beginning of the decay), it’s fucking scary. It’s not only how we’re defined but, for many of us, how we define ourselves.

So I get why Renee Zellweger felt the need to do whatever it was she did to herself. I like to think that I’ll let my looks go softly into the night, but who knows? Maybe I’ll be led astray and succumb to the shiny promises of Juvaderm and blepharoplasty.

At least I won’t have Mario Lopez talking about me on TV if I do.

14 thoughts on “In Defense of Renee Zellweger”