Yup, that’s my mug along with a roundup of some of my very best qualities on HuffPo Divorce.

I was going to start this post out by saying that I’ve learned lately that to get what you want in life, sometimes you really need to grow a pair (cahones, man) and take risks. But then my inner-feminist  was like, “Seriously? Do you have to have a weiner to put yourself out there?” Of course, we all know that the answer is, “No.”

There are plenty of timid men and courageous women. Balls have got nothing to do with it.

I do have big boobs though and since there are two of them, maybe we’ll go with that instead.

At any rate, whether it was balls or boobs at work, I got up the nerve a few weeks ago to email Arianna Huffington to tell her I’d love to be part of the HuffPo bevy of bloggers. I stole the idea, because I’ve had about 12 original thoughts in my entire life, from the super-smart and brave Amy (I pretty much love every Amy) over at the blog Using Our Words who did the same thing to get on HuffPo a while ago and wrote about it here.

I’ve made a concerted effort to try to get myself on other sites besides this one lately and had submitted a few things to Huffington Post but never heard anything back. Seriously, crickets.

And I love Arianna. I’ve listened to an interview she did with Nora Ephron in 2006 at the 92nd Street Y and a book she wrote on, ironically enough, Becoming Fearless and think she’s not only smart and ambitious but a champion of other women as well. I proabably spent two days, on and off, working on the email – I mean, just what do you say to Arianna? – and finally hit the send button with a trembly finger.

And then I waited.

I probably hit the refresh button on my inbox a grillion times over the next few days to find only updates from Twitter and American Express (PS AmEx: can you please stop writing to tell me how much I’ve spent since my last statement?).

And of course, right when I’d forgotten all about it, around 4:00 on a Sunday afternoon, I checked my emails and there, would you believe, was a note from Arianna herself. It was short and sweet but she thanked me for thinking of them and hooked me up with an editor and wished me all the best.

Naturally, I screamed. And then I called my mom.

So what is it like having something posted on Huffington Post? Well, the first piece brought a lot of shout outs and hallelujahs on social media from folks I already knew but not much else happened.

But another essay that went live Friday had very different results. Like, it doubled my highest traffic day ever and also brought with it some of the meanest things ever said about me from someone I haven’t been married to. But it also brought emails, comments and Facebook messages from people from all over who have been down the same road. People who reached out to say, “Yes. Right. Me, too.” 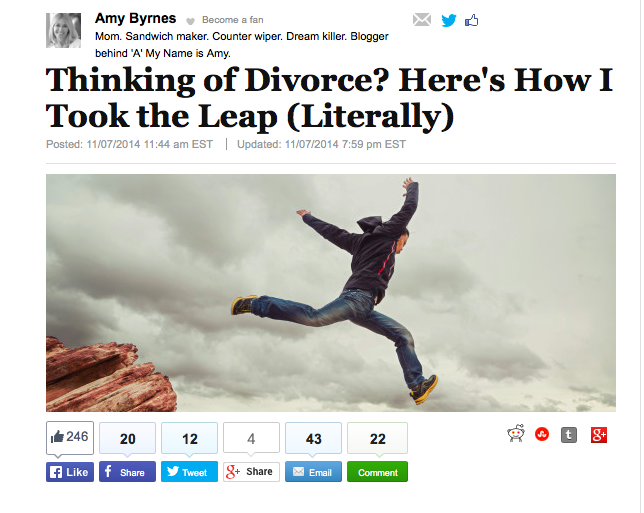 Too legit to quit.

And that’s what writing is really all about. Being heard and connecting. Knowing you’re not alone in all of it. Being a part of something bigger than yourself.

And, really, what better place to do all that than the Huffington Post?

Wait, I forgot to tell you that I also got to write a piece for The Stir at CafeMom this week about my all-time-favorite TV show, The Gilmore Girls. Don’t know what I’m talking about? Get thee to Netflix where all seven seasons are currently available for streaming and see you when you’re done in a few weeks.

An ode ot Rory and Lorelai on The Stir.

Sign up to get all my posts sent directly to your inbox to read at your leisure. Like when you’re trying to stay awake until your 16-year-old comes home on a Saturday night. Just plug your email into the “receive new post in your inbox.”  Seriously, all the cool kids are doing it.