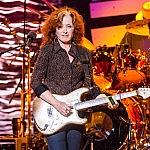 I’ve been a Bonnie Raitt fan since her breakthrough album, Nick of Time, was released in 1989. Back then – in the last days before I got married – I liked her bouncy music, rough voice and catchy lyrics.

Later, my then-husband and I saw her in concert and I think we went again to see her perform locally after her next big album, Luck of the Draw, came out in 1991.

My biggest memory of the first concert was that Chris Isaak opened for her and initially, not one person in the audience was really paying attention to him but by the end of his set, we were practically throwing our panties at him. I think even my ex would have thrown his panties, Chris Isaak was just that great. He just had major charisma and showmanship and had us eating out of the palm of his hand at the end of his set.

After that, I didn’t really think much about Ms. Raitt again for a long time. The music from those albums helped make up the soundtrack of those early years of my marriage and days as a young mother. Hearing them reminded me of just how young and hopeful I was for our future and so sure of how things would turn out.

And how wrong I was.

Anyway, just last year during a massive closet clean out, I unearthed the big binder that held a lot of the CDs I had bought back when that was how you listened to music. There had to have been well over 100 discs tucked into plastic sleeves offering a trip down memory lane and a collection containing everything from Lyle Lovett to Prince to 10,000 Maniacs and Raffi (“Baby Beluga,” anyone?).

And somewhere in between were the two Bonnie Raitt CDs, which I pulled out and popped one into my laptop to listen while I cleaned.

It’s as if some of those songs were written just for me: “Real Man,” “I Ain’t Gonna Let You Break My Heart Again,” “Too Soon to Tell,” “Nick of Time.”

Raitt was probably around the same age I am now (okay, maybe a little younger) when she started experiencing commercial success and the songs come from someone who had known disappointment, heartache and joy. Someone who had experienced life’s ups and downs.

So when a friend asked me if I wanted to join her last Friday night to see Raitt in concert, I didn’t hesitate taking her up on her offer.

And I wasn’t disappointed.

There’s no way around it: Bonnie Raitt is the fucking boss.

Standing on the stage of the New Jersey Performing Arts Center symphony hall, exuding confidence and sexy as hell in her shiny platinum shirt and high heels, she was the epitome of cool.

I think what most appealed to me as I watched her perform her two-hour set – peppered with lots of familiar hits from those two popular albums, mixed with covers of songs by Bob Dylan and Elvis – all I could think was how comfortable she seemed in her own skin.

She’s who I want to be when I grow up.

We hooted and hollered and clapped along to songs like “Something to Talk About” and “Real Man,” really understanding what she meant when she belted out, “Been around the world/I’m a woman not a girl.”

She rocked through “Love Me Like a Man,” singing, “I want a man to hold me/Not some fool to ask me why.”

But she totally killed me during her encore performance of “I Can’t Make You Love Me,” sitting on a stool center stage and pouring her heart into her now-classic ballad of unfulfilled love.

I don’t normally get teary unless hormones are involved. I’m pretty stoic like that.  And my hormone levels were fairly stable on Friday night but my heart burst when I heard Raitt sing:

And I cried in the darkened theater for the loss of young dreams and for having the courage to recognize when someone can’t love you the way you need to be loved.

And knowing when to let go.

She sang it like she meant it. Her voice was raw, full of emotion – pain and regret – like she had just gotten out of the bed of which she sang.

The song was the highlight of the evening for me. Raitt played a few more songs and then called it a night.

She wished us all a happy Thanksgiving and mentioned that she and her band were on the tail-end of a two-year tour. She said she couldn’t wait to spend some time back at home and then record a new album and get back out on the road.

How could you not admire that? That at 64, she just wanted to get back to work.

“We love our jobs,” Raitt said during a recent performance in Boston, according to The Boston Globe. “We’re not suited for anything else.”

Sounds like a woman who knows what she needs.

ARAM BOGHOSIAN FOR THE BOSTON GLOBE

One thought on “I’m a Woman, Not a Girl”