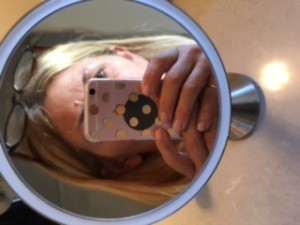 To celebrate my newly-renovated bathroom in the house I bought this winter, my mom presented me with one of those super-duper magnifying mirrors to sit on the pretty quartz counter where I can pull up a stool and examine my face to my heart’s content.

In my old bathroom, I had a big rectangular mirror I’d bought at Costco hung above the vanity. Screwed into the wall over to the left was a smaller mirror that swung out on an arm and you could flip the round mirror between regular strength and the other side that provided a more magnified view of oneself.

I bought the smaller mirror a few years ago when I determined I couldn’t really see specific things on my face that required grooming, like errant brows and pimples. At the time, I chalked it up to the inferior craftsmanship of the Costco mirror but in reality, I couldn’t see myself as clearly as I used to because my eyesight isn’t what it used to be, much like abs.

So I began to rely on that smaller side mirror for grooming but, honestly, my routine is not very complicated, especially when it comes to wearing makeup. I don’t really get involved with anything other than lip stuff unless I’m, like, going on a date or something. Honestly, I can’t stand the idea of taking eye makeup off and I’m also just not super-handy in the makeup department. Much like hair braiding and doing splits, I am deficient in those most feminine of skills.

All this being said to explain that as I am not applying mascara or rouge on a regular basis, I did not find myself really examining myself in that smaller mirror. The big Costco deal was just fine for putting on deodorant and rubbing lotion onto my elbows.

I also outsource my waxing needs, which eliminates another reason for heavy examination. Every few weeks I visit one of my favorite “browistas” who somehow shape the, like, three eyebrow hairs I have left into something resembling an arch and then rip the mustache off over my lip for good measure.

While I was paying for my waxing a few months ago, I picked up this little mini-razor that was displayed on the counter after all the girls who worked there were raving about all the hairy bits on their bodies they used the razor on – their arms and their faces, to name a few. What the hell? I thought.

I went home and went to work on the fuzz covering my right cheek and jawbone. I began scraping and holy shit, it was like I’d uncovered a small kitten on my face. Who knew all that peach fuzz, which I’ve noticed every now and again since I was, like, a little kid, would have added up like that? Of course, it was kinda satisfying, too, so I continued down my neck and up along my chin. I moved over to start working on the left side but the lighting in my bathroom above the vanity only illuminated the right side of my face so I did a little scraping on the left but couldn’t really see much accumulation and then decide I just didn’t have as much fur on one side than the other side of my face.

But a trip back to my browista a few weeks later confirmed the fuzz on my face was not relegated to just the right side. “You should use one of the mirrors in your car,” my brow girl suggested. “You’ll really be able to see your whole face in the daylight.” So, apologies to anyone who had to witness me half-shaved for those few weeks.

But honestly, I was just screwing around. I’m not really worried that the fuzz on my face is horrifying those forced to look at me. I mean, our whole bodies are covered in hair and even though I spend an inordinate amount of time and money trying to keep a lot of that hair at bay, I can live with a fuzzy face. It was just fun to scrape up all that fur. And a cheek is a lot easier to work with than an arm. I have no interest in getting involved in removing all extremity hair and luckily, my Irish heritage is on my side in that respect.

So, even though I have not been a great mirror examiner in the past, when we moved into our new house in the beginning of March, our only mirror was a little old medicine cabinet in the hallway bath upstairs that requires really good eyesight to  see things. I could identify my teeth for brushing and hair for combing, but not much else. I’m lucky though in that I am definitely a glass-is-half-full kind of person. Unless otherwise notified, I tend to assume that everything is hunky-dory.

Ignorance really can be bliss.

I even found myself in a condo on vacation recently with an equally-bad mirror situation. But it was just me and my 13yo son – who has a hard enough time looking up from his iPhone, much less look at me – so I wasn’t too worried about what I looked like. We’d gone down to Hilton Head with our neighbors and enjoyed low-key week of sitting on the beach and riding bikes that didn’t really require any gussying up. I was shooting for presentable, at best.

When we got back from our spring break, I picked up the mirror my mom had bought me and eagerly took it out of its box, placed in on my counter and pulled the stool up close to take a gander. It’s the kind of mirror that magically lights up when it senses you in front of it and as the light bathed my face, I was horrified at what I saw.

The pores. The wrinkles. The eyebrows that had grown down to my lids. Even my earlobes looked crazy.

The whole thing gave me pause. On the one hand, it’s good to know what you’re dealing with. It’s nice to keep things in check. And on the other hand … I don’t know. Has it really improved my quality of life knowing I can literally see through the holes punched through my earlobes when I was in second grade that have supported four decades’ worth of dangly earrings and slowly stretched? If anything, it has alarmed the poop out of me.

But the mirror is not going anywhere. For one thing, I can actually see my eyelashes and putting on mascara isn’t the nightmare it used to be. And also, nose hair.

Hey! Let’s be friends! Sign up to get all of my latest posts sent right to your inbox by typing your email into the box below. You can also follow me on Facebook and Twitter.

19 thoughts on “Ignorance is Bliss”