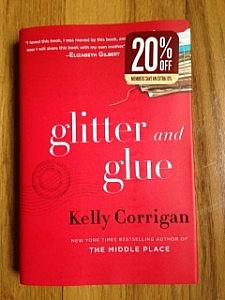 You guys, I have never tried to pretend that I am very smart over here. As a matter of fact, I often seem to be attempting to prove quite the opposite.

I’ve told you how I thought an undiagnosed case of scoliosis was the cause for my back fat and have shared pictures of myself on the Internet wearing a cheetah onesie (which I may or may not be wearing right now).

So even though when I was quickly Googling some last minute details before I left my house yesterday afternoon to drive an hour north to hear my gal Kelly Corrigan read from her new book at an appearance in Montclair, NJ, and a bunch of links were coming up Montclair, CA — as in on the other side of the country — I just figured that was a problem on Kelly’s end.

I just assumed that the only possible explanation was that, like, data had somehow merged and accidentally combined so that two of her upcoming appearances — one in California and one in New Jersey — had gotten mixed up.

Am I an idiot?

This is the same logic I have brought to other situations where I am just so dead set on one result — like I’m not going to get fired or I’m going to have a happy marriage — that I ignore all of the red flags waving frantically in my face.

A college friend had messaged me last week to tell me Kelly was going to be in Montclair for a signing of her new book, Glitter and Glue, and that was pretty much the extent of my research on the matter. I was like, “Great, I’m in. Who can I get to go with me?”

And although I tried to lure a number of people into my car to go see Kelly, I only ended up with one unsuspecting victim, my poor friend Susan.

And the kind of funny part is that she told me over our big glasses of red wine at the restaurant we got to by about 5:00 because I wanted to be REALLY EARLY AND GET REALLY GOOD SEATS, that even though she hadn’t even read any of Kelly’s stuff, her New Year’s resolution had been just to say “yes” to things.

So, we had lovely conversation — as always — and split a very nice beet salad with toasted pistachios, and as we were settling the bill, I saw a message come in on Facebook from the same friend who had told me about the Montclair event.

“Hey Amy! Hopefully u figured out way before I did that Kelly’s actually in CA tonight and not in NJ!”

I looked up at my friend and said, “Susan, you’re going to kill me.”

In the end, she did not. We drove the hour south back down the parkway and stopped off at the local Barnes & Noble where I bought us each a copy of Glitter and Glue.

It was the least I could do.

So, while the stars seemed, briefly, to be aligning so that not only would my photo be a part of Kelly’s video but I’d actually get to see her in person, it looks like I’ll have to settle for just hearing her voice come through in her writing.

So if I ask any of you if you want to come with me to do something, I suggest you vet the event beforehand.

And if you have a bridge you’d like to sell me, the answer is: I’ll take three.