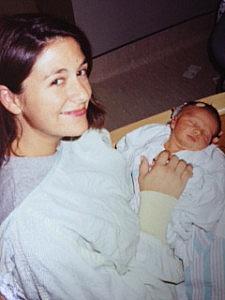 Twenty-two years ago today, I bought a car. Or at least, I started the day buying a car and ending up having a baby instead. It all happened so fast.

My husband at the time and I, babies ourselves, had just moved to the suburbs and were in the market for a second car as we prepared for parenthood. I had already started my maternity leave – unable to cope with the long train ride in and out of the city each day – and he was off for the Columbus Day holiday.

And so, much like Columbus whose journey brought him to an unexpected destination, we set sail that day in search of an extra set of wheels and ended up in a hospital room with me barfing up a giant meal hours before giving birth.

Note to all expectant mothers: Do not gorge on prime rib whilst in labor. You will live to regret every fork full. Please. Trust me.

For months, I had envisioned all sorts of happy scenarios as I rubbed my growing belly and religiously devoured “What to Expect When You’re Expecting,” but none of it prepared me for the reality of actually having the baby. I had been so focused on the birth that I was not prepared for the day-to-day slog of parenting. For sitting around and watching it cry and poop all day.

And so I had my truly excellent natural childbirth (no drugs, yo), bringing my 7-pound son easily into the world, and then everything went off script. He couldn’t breathe. I couldn’t expel the pesky placenta. We both labored until he was whisked off to the neonatal unit and I was wheeled into the OR.

For many years afterwards – long before I had to end my marriage or had a child slip into the darkness of depression – the hardest thing I ever had to do was leave that hospital five days after giving birth without my baby. I had to leave him there, alone in an incubator with tubes running down his throat and wires attached to a shaved patch on his tiny head. And that, my friends, sucked. I was a mess.

And of course, the rest happened so fast. The baby quickly recovered and in less than a week, he was home and crying all the time and making me wonder what the hurry was getting him out of the hospital in the first place. While he was there, I had been religiously pumping breast milk at home so that when he could finally be fed, I would be more than ready to accommodate his little thirst. We immediately began passing thrush back and forth to each other, which for him meant yeasty white patches inside his pink mouth and for me it meant searing pain across my left breast. Like the thing was on fire.

We all set sail into unchartered waters when we become parents. We think we are clever, with our courses clearly mapped and plugged into the GPS of our lives. But kids are tricky and bring with them lots of variables, their insecurities and emotions are the winds and tides that can blow us off course in a heartbeat. So we often end up standing on the shores of some strange land — nowhere near where we expected to be — much like Columbus landing in the Bahamas rather than Asia.

But here’s the thing: As much as I was so sure 22 years ago that my life would follow a certain trajectory, I’ve discovered that even though I’m far from where I thought I’d be, it’s better in the Bahamas.