This is the story about discovering things that have been under your nose all along.

Recently, I took part in something called a blogger crawl, which was akin to a pub crawl in that a group — in this case of bloggers — visited different establishments but no alcohol was involved and we remained upright the entire time.

The purpose of our crawling was twofold; first, it allowed us to meet other people who sit behind laptops and connect and share what we love with hundreds (and for some thousands) of readers. Who knew there were so many great bloggers living in my neck of the woods?

Here are the Blogger Crawl links from the rest of our group:

Daily Dose of Dawson
I Believe in Pink
It’s Droolworthy
Like Lillian
Magnificent Temptations
Mbeewell
More By Sonya Cashner
The Perky Foodie
Second, the crawl let us get out and explore lots of shops, salons and eateries in our Jersey Shore area which we in turn get to share with our readers. Because, while it’s been firmly established here time and again that I am lazy to the core – like, I just ordered a rubber mallet (for proper beach umbrella set up) through Amazon Prime rather than visiting a local hardware store – we really should get off our duffs and support hard working local businesses before the whole country becomes one big strip mall.

That would not be cool.

We started our crawl a few weekends ago at blogger Carrie Drazin’s lovely home. She’s the creator of the site It’s Droolworthy who not only spearheaded our inaugural blogger crawl but just launched her blog’s redesign where she shares all sorts of things that I’m dying for like this watch or going on this trip.

Instead I have to pay for stuff like this. Sigh.

We nibbled on sweet and flaky treats compliments of everybody’s favorite Red Bank boulangerie and posed for some photos before heading off to the crawl. 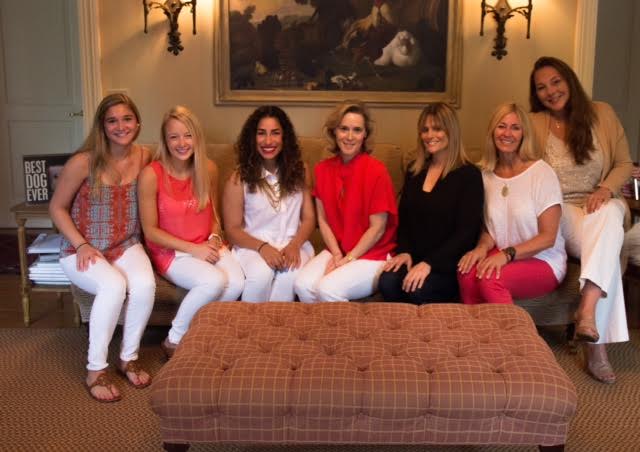 I broke off from the rest of the gang to check in with my friends at River Road Books in Fair Haven and this is where my story takes on a “If You Give a Moose a Muffin” kind of vibe. Like, things just kept spilling over into other things (like he’ll want some jam to go with it and then you’ll have to go to the store to buy more muffin mix, as you do when you start feeding mooses). 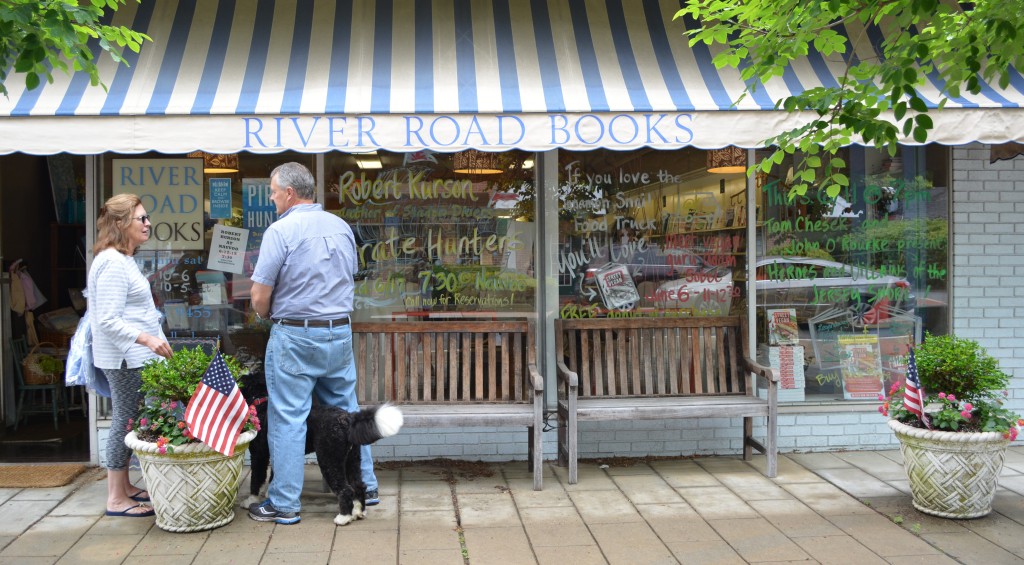 I’d chosen the book store because it just seemed like a natural fit for me to write about. Number one: I love the ladies there, mostly because they are readers and have either read it or it’s next on there list or they know someone who did. And not only do they have those super-tempting tables piled with every book you’ve been wanting to read … 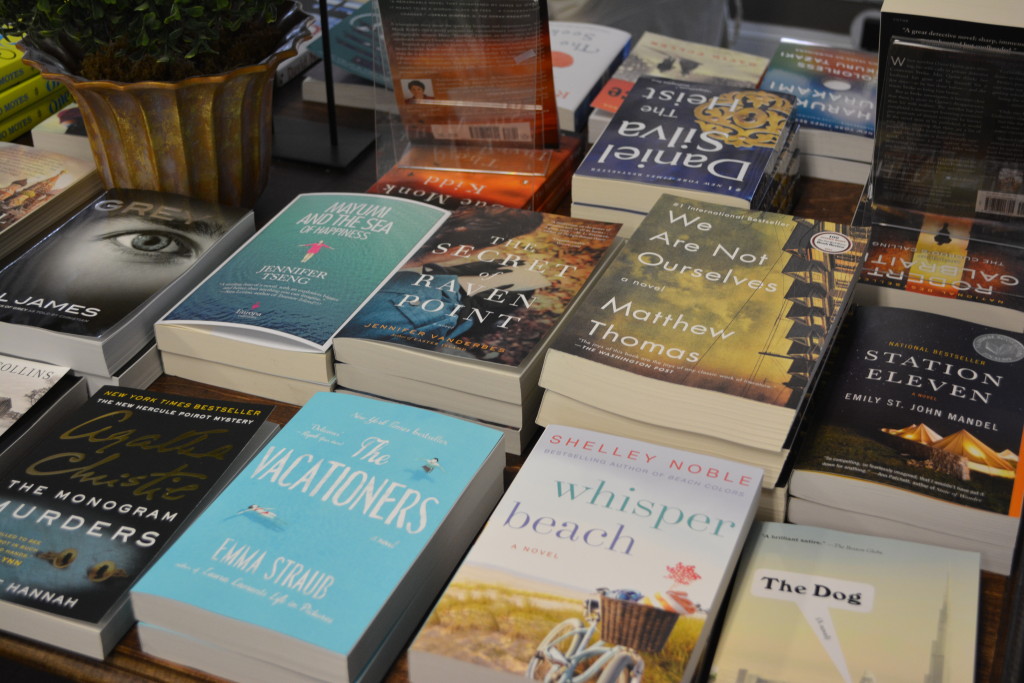 Dying to read “The Vacationers” and “We Are Not Ourselves.”

… but they’ve always got the best doodads to add to your purchase, and I am a sucker for doodads. When I was in last week I could not resist picking up one of their new 2015-2016 MomAgendas they just got in, but a package of blank notebooks that have elegant gold lettering on the front spelling out “Fucking Genius” and “Getting Shit Done.” I mean, what better place to jot down notes and ideas to share here? 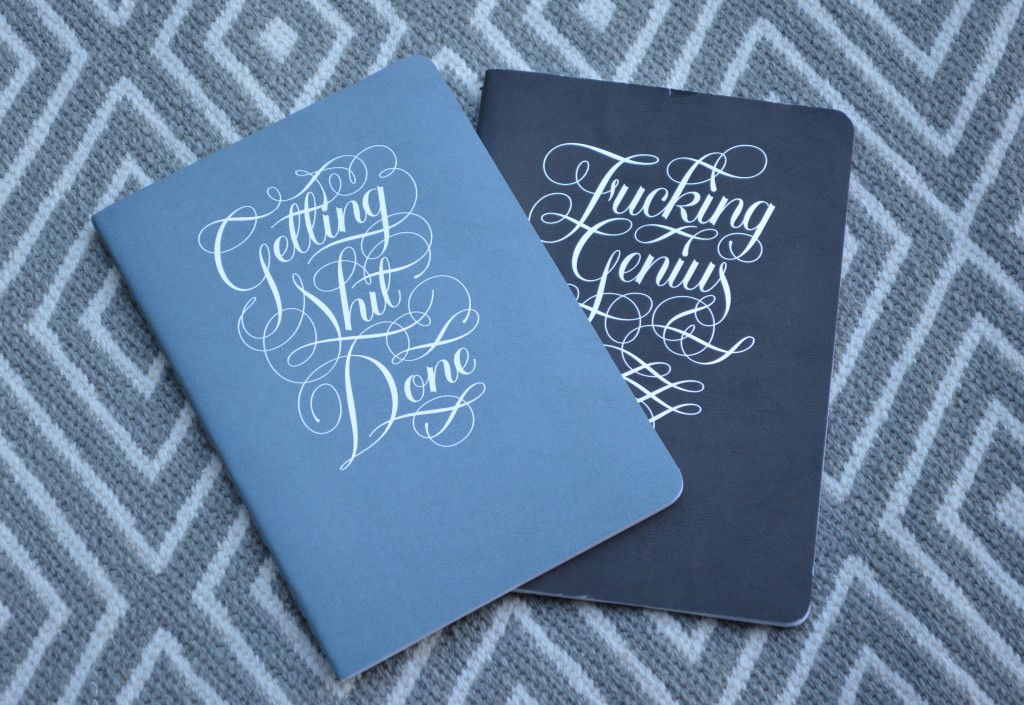 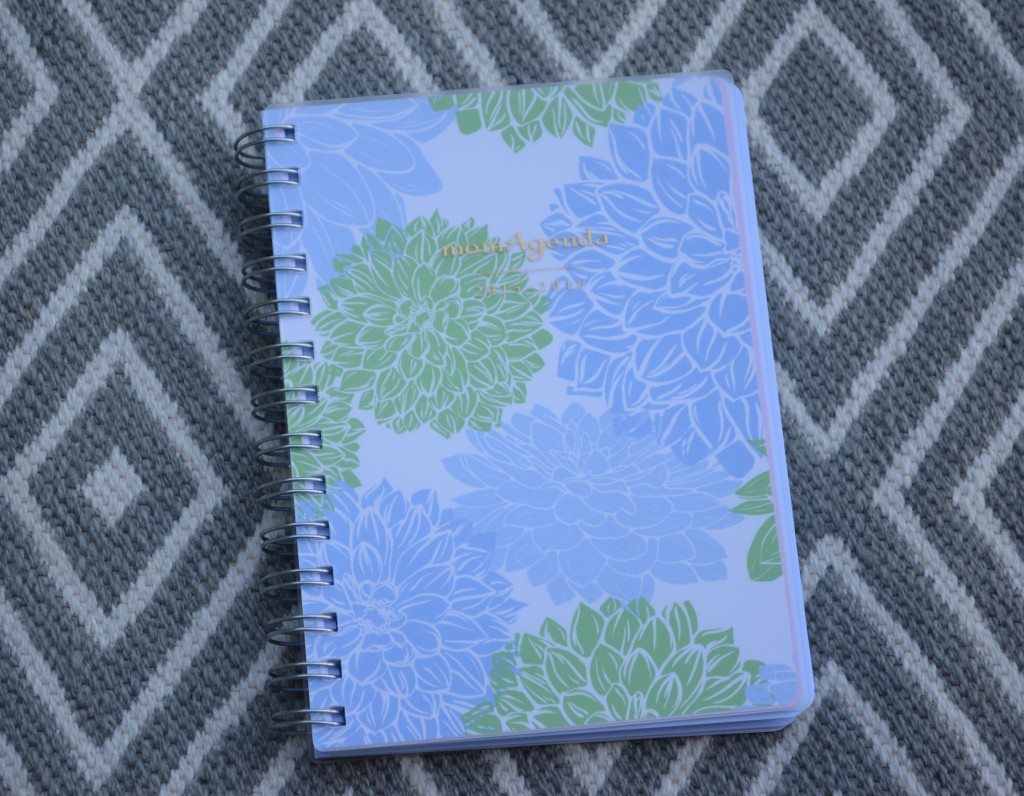 A new calendar for organization. Or at least an attempt at such.

Personally, my favorite time of the year to hit a bookstore is right on the brink of summer. I love fantasizing about all the hours I’m going to spend with my toes dug deep in the sand and my nose even deeper in a good book. And River Road Books doensn’t disappoint; they’ve got a great selection of beachy reads as well as copies on hand of some local schools’ summer reading lists. There’s plenty of books for younger readers to pick up and have on hand to pull out on those inevitable rainy summer days. 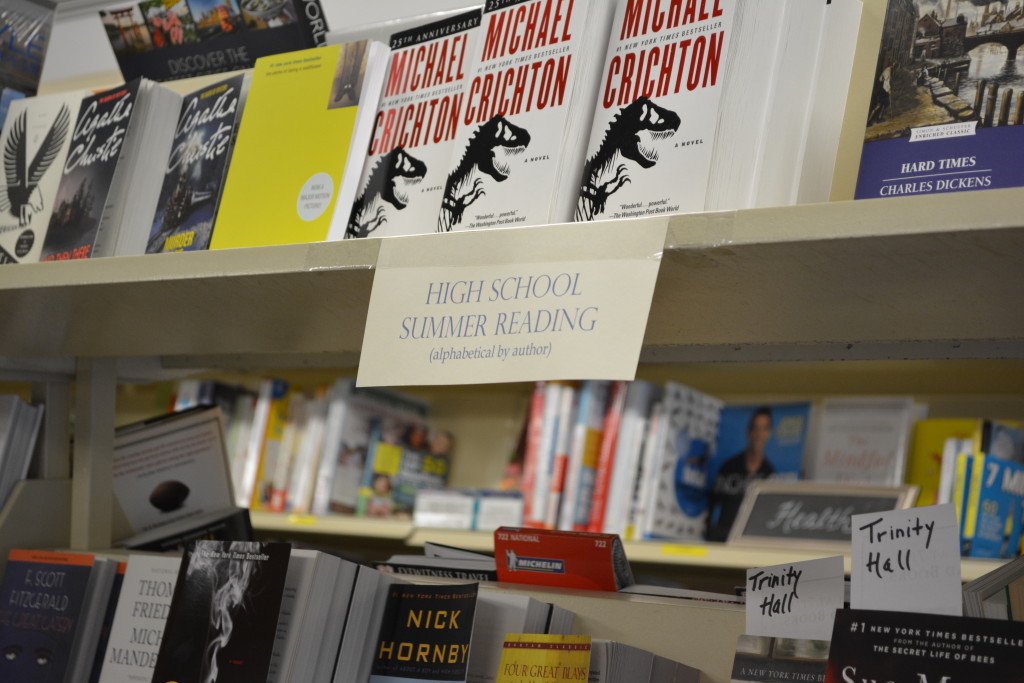 Who’s lucky enough to get “Jurassic Park” on their summer reading list? 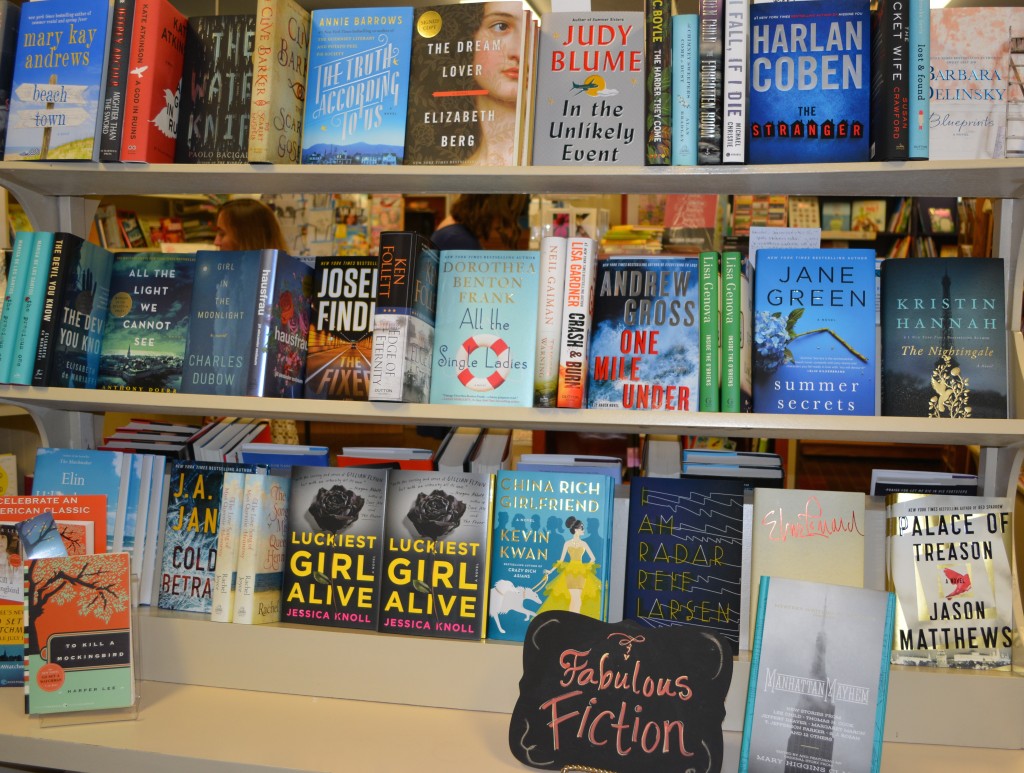 “All the Light We Cannot See” has been sitting on my nightstand for months.

So I stopped by the bookstore and found they were having a book signing that morning for Adam Sobel, chef and owner of the wildly popular Cinnamon Snail food truck, who just published a new cookbook — Street Vegan — stuffed with lots of yummy vegan recipes like Fresh Fig Pancakes and Thai Barbecue Seitan Ribs. 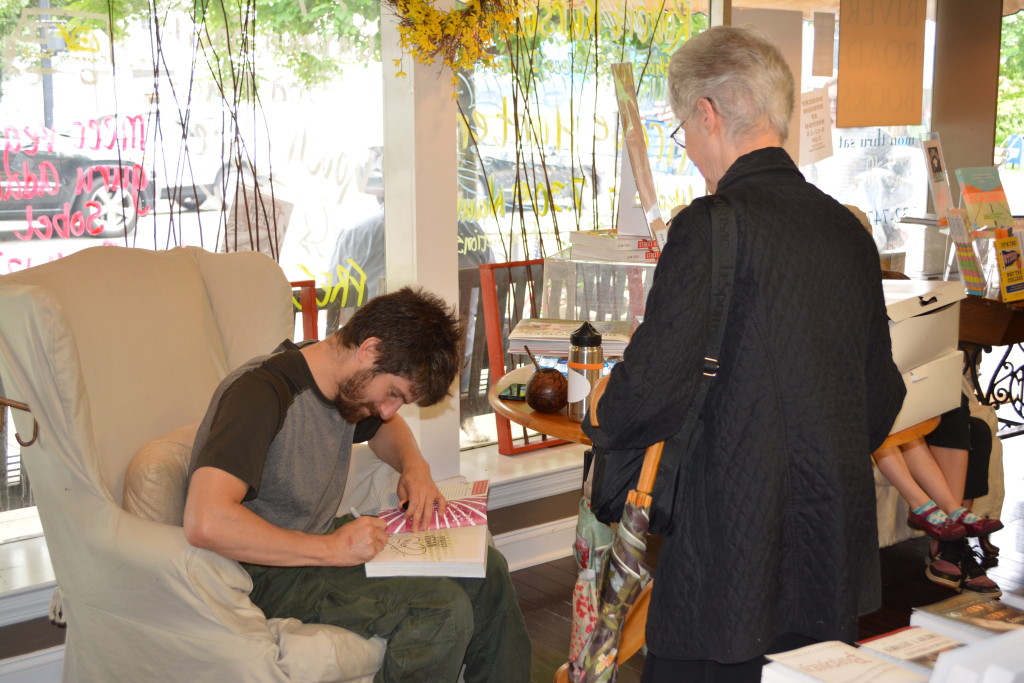 And whether it was the cookbook that brought out the crowd lined up to chat with Adam or the free donuts that were being given away with book purchases, I’m not quite sure but folks were excited to talk to him and tell him how much they loved his food. His kitchen is based in Brooklyn and although the Cinnamon Snail truck makes regular stops in Manhattan and Jersey City, Adam says he’s loyal to Red Bank because it’s where he got his start.

“Before I had my own business, I had been cooking vegan food at local restaurants for years, and had developed a following of catering customers and private cooking clients from that,” he told me later by email. He added that he and his wife started selling food from a stand at the Red Bank Farmer’s Market where they also developed their donut recipes.

“Our red bank customers have always been here to support us and watch us grow, so we are very loyal to Red Bank,” he said. “Now we drive all the way to Red Bank from our kitchen in Brooklyn, which makes for a very long day, but it’s great to be able to serve the community down here.”

Adam and his wife and two adorable daughters (who were very patiently reading books while their dad did his thing) also live in Red Bank where they also teach free yoga classes a few nights a week.

I was so busy chatting and taking pictures that morning that I neglected to try one of the Cinnamon Snail donuts and so made it my mission to hit the Red Bank Farmer’s Market the following Sunday and track down the food truck. 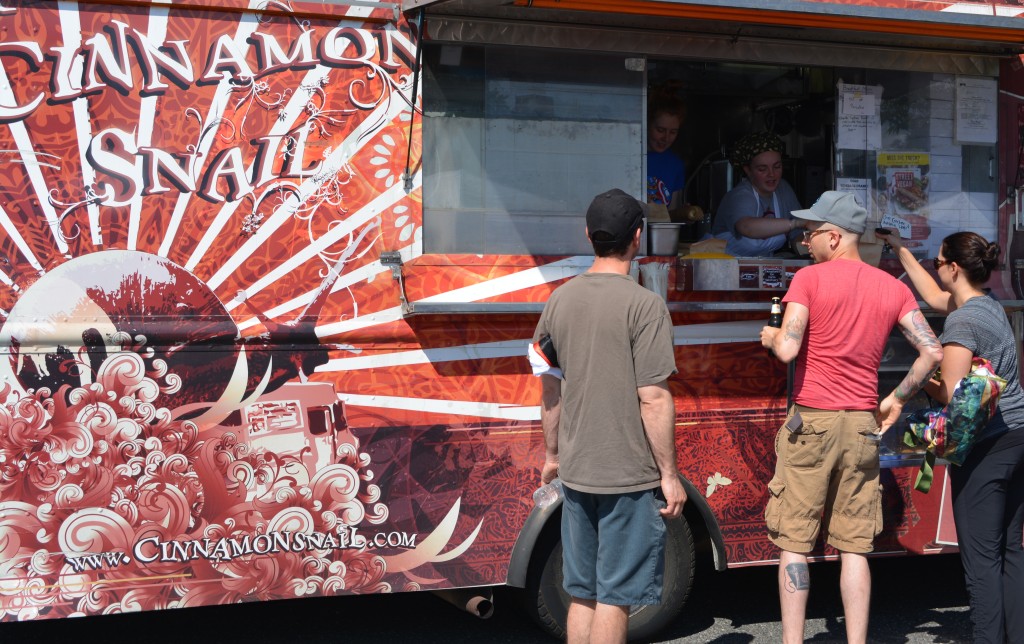 The Cinnamon Snail food truck crawls into the Red Bank Farmer’s Market most Sundays. They are pretty good updating their status and weekly menus on their Facebook page. https://www.facebook.com/TheCinnamonSnail?fref=ts

Readers: it was love at first site. She was not too big and not too small and dusted in pistachio and blanketed in a rosewater and cardamom glaze. I asked her to marry me but before I knew it, she was gone. 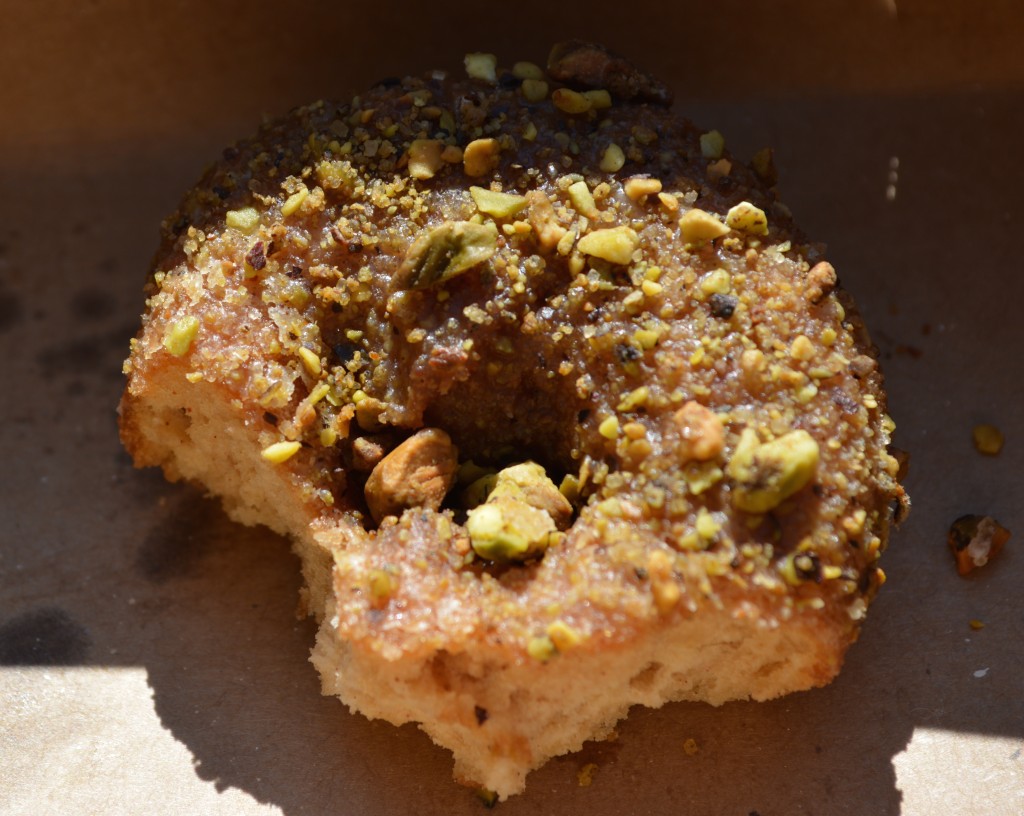 She was beautiful and briefly, mine.

But I need to confess that hiterto I’d never gotten my lazy butt to this farmer’s market and was pleasantly surprised to discover all the amazing produce, plants, baked and prepared goodies and – most importantly – ice coffee that were available. We brought home containers of creamy fresh guacamole and spicy mango salsa to go with our Thai chicken burgers the next night and a pint of earthy shiitake mushrooms that was the perfect addition to the brothy noodle soup we ate later in the week. We also couldn’t resist picking up an almond croissant and a focaccia roll my daughter brought home to make a sandwich later that day.

A table full of gorgeous mushrooms at the Red Bank Farmer’s Market. 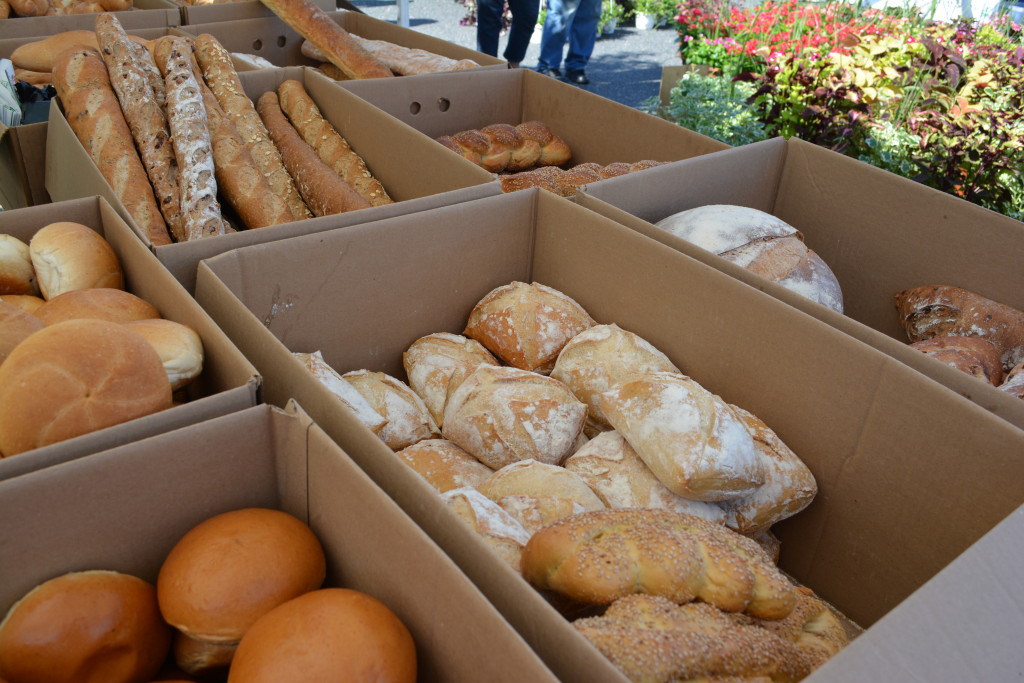 It was all pretty epic.

The Red Bak Farmer’s Market is located at The Galleria, the corner of Bridge Avenue and West Front Street in Red Bank, every Sunday from May through mid-November, 9 a.m. to 2 p.m. Get there early for the best pickings.

So I encourage all of you who haven’t had the pleasure to make the farmer’s market — any farmer’s market — nearest you a destination this weekend and perhaps you’ll be lucky enough to hook up with a sweet thing doused in rosewater. And while you’re at it, swing by your local bookstore and stock up on reading supplies — and maybe some naughty notebooks — to get you through the fall.

Don’t forget to check out the rest of the links from our blogger crawl and I can’t wait to do it again next year.