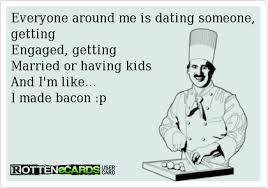 “Okay, Mom,” said my 17-year-old daughter, totally out of the blue not long ago. “How ugly is this guy?”

We had been lying around our den one afternoon – along with her older sister and best friend from across the street – laughing and chatting about nothing in particular, when she asked her question.

I had just started dating someone and although it was the first real relationship I had had since I split from their dad five years earlier, the girls really didn’t want any details. In fact, the entire subject of this new guy made their faces twist in disgust and brought an abrupt halt to the conversation.

So I was surprised she would ask me anything about him, especially what he looked like.

She then proceeded to make gagging noises and pretended to vomit over the arm of the leather chair she was draped in. But the neighbor was all over it; leaning forward to get every detail she could about my new dating life.

“Maggie is, like, obsessed with this,” my daughter sniped and she told her friend to cut it out. She made it clear that my dating life was totally disgusting and not cool.

I always thought that by the time I got around to dating, once we were able to brush all the ashes and soot of the nuclear fallout of my divorce off and get on with our lives, my kids would be happy to see me happy.

I am so naïve.

The truth of it is that children, for the most part, are not really that interested in their parents’ happiness; especially when it puts their own happiness at risk.

No, it turns out my kids would rather see me alone, surrounded by cats and stacks of newspapers and back issues of The New Yorker, than with a significant other.

And for a long time, that seemed to be my trajectory. I was really busy with a demanding full-time job and managing the fallout of the divorce – all of the emotional ups and downs – to even think about dating. I had a pissed off ex-husband and three ornery teenagers so I didn’t really feel the need to develop any new relationships. I had enough personalities on my plate to manage, thank you.

But five years after everything imploded, even my therapist was like, “Start dating, already.” And I tried. I signed up for online services and never said “no” to anyone trying to fix me up with someone. I even gave a checkout guy my number, for gods sakes.

But my heart wasn’t really in it.

So, unlike all the glasses of wine and cups of coffee I shared with a litany of fix ups before, I went on a date not long ago with not only an open mind, but an open heart and kind of liked the guy enough to go out again the next night.

And I’ve got to admit, the whole thing came out of the blue. One minute I’m going to meet yet another guy at a bar for a drink and the next, we’ve gone out together seven times in two weeks.

So the kids were annoyed that this new relationship briefly took me away from being on call 24/7 for sandwich making duties and counter wiping. They like the idea of me standing in our kitchen at the ready as they go about their lives. They like to know that I’m around on the off chance that they might need me.

And they’ve been jealous of things that have taken my attention away from them in the past – like my girlfriends and my former job – but nothing compared to the disdain they employed when discussing my love life.

One night, as I rushed around the kitchen putting out taco fixings for dinner before I got picked up to go out on a date, two of the kids were complaining that I was going out with this guy again and I threw up my hands and asked, “You guys, don’t you want me to be happy?”

And the two of them looked at me and said, unequivocally, “No.” They barely blinked before they said it.

My 20-year-old daughter told me she had come home from a summer class the night before and was feeling cranky about the course and when she saw her older brother sitting on the couch watching TV, she asked him where I was.

“AAARRRGGGHH!” was, I think, the response she said she gave him and he immediately snapped back, “Cut it out. Mom deserves to date.”

So, at least a quarter of my progeny can see past themselves and support my love life.

I tried to talk to each kid about it privately. I tried to assure them that I wasn’t going to marry the guy. We were just dating and that if it wasn’t him, at some point it was going to be somebody else.

I told this to my little guy, and he just said, “Face.”

But it never came to that. The relationship lasted the duration of two gel manicures — for whatever reason — but it taught me a lot about myself and what I want. And I think it was a really good experience for the kids. It helped brace them for when I am in a relationship that lasts longer than a month.

12 thoughts on “‘How Ugly is This Guy?’: Things My Kids Ask About My Dates”