This is an updated version of something I wrote last year cursing this annual insanity. 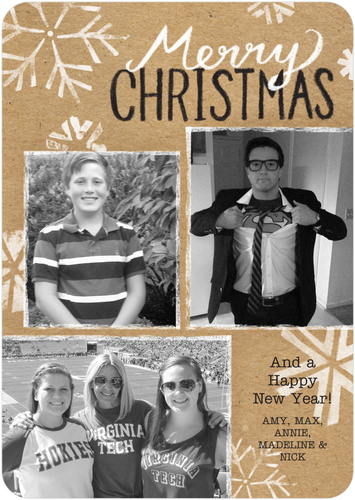 It started the day after Thanksgiving last year, the annual marketing campaign going on in homes across the country that gives new meaning to the term Black Friday.

Inside my mailbox on that day, along with 20 pounds of Pottery Barn catalogs and Bed Bath & Beyond coupons, sat the first holiday card of the season.

I think the special delivery vexed me for two reasons. First, it was a reminder that I needed to get my act together to accomplish a great many things in the ensuing weeks before Christmas, which included dealing with all the Christmas tchotchkes crammed into about a dozen boxes in my basement and the stupid Elf on a Shelf.

Secondly, that card signaled that I needed to plan how I would be marketing my own family this holiday season because that, let’s be honest, is what it’s all about.

I want you, along with my college roommate and cousin in Connecticut, to see just how attractive, smart, accomplished and well-traveled we are, via a 4 X 6 card.

But don’t get me wrong: I drank the Christmas card Kool-Aid years ago and have spent a lot of time, money and patience creating the annual “aren’t-we-something” campaign. I am the ultimate Mad Mom.

Parents nowadays have no idea what it was like producing a card back when dinosaurs roamed the Earth and before digital cameras were de rigeur. When I, and every mom within a 10-mile radius, had to bring my roll of film (actual film) to the CVS to be developed, and then wait a few days in hopes that at least one of the 24 shots would be a winner. I prayed for that one frame where all eyes would be open, looking straight at the camera and not rolled up in small heads in disgust.

Then I had to get 100 copies made of that one tolerable photo and then stuff said photos into cards, that needed to be signed and maybe a bow needed to be tied, and then stuffed into envelopes, licked and addressed, stamped and mailed.

I’m not saying you young moms have it easy, but seriously, you have it so freaking easy.

Nowadays, you just scroll through a photo gallery and upload a variety of images to an adorable card that’s personalized and ready to be mailed when the shipment arrives on your doorstep.

I thought I could make a clean break from sending holiday cards when my husband moved out in December 2008. It was such a terrible time and I figured I’d have to be some kind of marketing genius to generate a card that said, “Look how happy we are.”

So I just kind of knocked it off my mental check-list of holiday tasks for that year until one of the kids asked about it.

“I’m thinking we’re not gonna send one this year,” I told my oldest daughter.

The other kids sitting in the kitchen nodded in agreement and I realized that the stupid card had become about more than how others see our family. It had become about how we see ourselves, too.

And sending out a card that year signaled to the kids that life would still go on, even after their dad moved out. There would still be cards, wrapping paper and Christmas for them all.

I decided to bang my cards out earlier than usual last year to take advantage of all the Cyber Monday sales. I checked a couple of sites for the best deals and instructed the older kids to send me photos of themselves to use since we didn’t have any great shots of all of us together.

I struggled, as I have these last few years, with how to personalize the card since the kids and I have different last names. Hyphenating the two seemed weird and just using the kids’ name, the one I had used for 20 years, didn’t seem right either.

So I finally settled on sending love to all our friends and family last Christmas from “4 Walsacks and a Byrnes.” Awkward, perhaps, but it just felt more right than the other options.

I think the end-result, while far from perfect, said, “We’re doing okay.”

I tried to get out of doing cards again this year. I’m not really feeling like a millionaire and thought that that $200 could be better spent on, like, one of the many new iPhone 6s Santa is expected to bring down our chimney this year.

So I casually floated the idea at dinner one night last week while ladling some soup into bowls but my 17yo daughter was having none of it.

“Now we’re going to seem even less together,” she said in only that way a teenage daughter can say to remind you of what a failure you’ve turned out to be as a mother. Like, a constant disappointment.

But it also reminded me that no matter how long your parents have been divorced, you really need to feel like you’re just like everybody else. You want people to know that it wasn’t the end of the world. That you’re doing okay.

So I dutifully combed through the last 12 months in my iPhoto to find some decent shots and then scrolled through TinyPrints to find a card that had the smallest number of photo boxes and a saying that didn’t seem too bullshitty. No “It’s a Wonderful Life” or “Love and Joy” for us. I’d actually like a job at a greeting card company so I could help come up with content for those of us who hate pretending. What about a “We’re Doing the Best We Can” card or one that says “Hope and Pray”?

Now, those are sentiments I can get behind.

I settled on “Merry Christmas” in the end and the box of all 100 of them is already sitting on my kitchen island, waiting for me to get off Facebook and mail them to everyone on our list.

But the box also sends a signal to my kids that everything really is okay. We might have different last names now and a dad who lives in the next town, but we’re still a family.

Give yourself the gift of Amy. Don’t worry, I’m not jumping out of a box Christmas morning. But you can sign up to get all my posts sent directly to your inbox. Just plug your email into the “receive new post in your inbox.” Oh, p.s., it’s free.

8 thoughts on “How to Market Your Family”