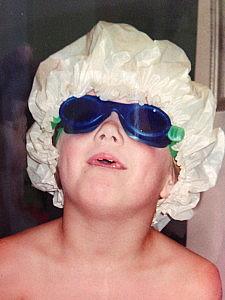 Because I am a woman of a certain age living in New Jersey, there might be certain assumptions you’ve made about me.

Perhaps you think I tawk a certain way, embrace big hair and have had my breasts surgically augmented up to here (hand at throat). But while I’ll admit to being a fairly aggressive driver and knowing all the words to most Bruce Springsteen songs, I don’t really fit that “Real Housewives of New Jersey” profile. I like to wear my hair short and flat to my head, my boobs look like the kind of boobs you’d find on a 47-year-old woman who’d nursed four kids and a woman I interviewed with once years ago in Manhattan for a PR job with Gucci couldn’t get over how I spoke.

“You don’t sound like you’re from New Jersey,” this Italian woman marveled repeatedly after I told her I grew up in the Garden State.

But there is one thing about me that kind of fits the “Jersey Shore” profile and that is my penchant for tanning. It just makes everything better: Middle-aged belly fat, wobbly arms and a face left pale by cold and snowy Jersey winters.

Dudes, I am a firm believer that if you can’t tone it, you need to tan it.

I’ve embraced this notion since I was a teenager, when I returned home from a two-week stay at my parents’ condo in Boca (so Jersey) and garnered attention not only for my deep tan but my overall attractiveness level. It had gone way up. It turns out I’m one of those girls who just looks a lot better with a little color.

After that revelation, I dedicated myself to tanning. I spent hours sitting on the beach with my high school BFF, slathered in Bain de Soleil, sipping Diet Cokes and puffing away on our Merit cigarettes (the picture of health, circa 1983).

When tanning beds came into vogue, you can bet I’d scrape money together to go and bake on those glass beds, my eyes shielded by those little rubber goggles like someone participating in some weird science experiment.

But then, like the delicious Diet Cokes and cigarettes, we found out that all those rays — whether real or blasted out of a tanning bed — were not so good for you.

So when a spray tan place opened in town 10 years ago,  I was an early adapter. I quickly adjusted to standing in just a paper thong and a hair net in front of another woman, while she instructed me to turn my leg this way and that, and then turn around and bend over a little to avoid that dreaded ass wrinkle.

I’m kind of sorry I know these things.

Now, you don’t have to go au natural — you can wear a bra and underwear or a bathing suit — but I mean if I’m getting tan, I am going to get a tan.

And I’ve learned over the years that being as brown as a berry was cute when I was 8 — when my siblings and I would pile into the dentist’s office for a check up after a long summer playing under the sun sans sunscreen and the receptionist would say, “Look at all you brown little berries” — but not so attractive on a grown woman. Witness the poor “Tan Mom.” A little glow is really all you need.

I visited the nice ladies at the spray tan place in anticipation of my Florida Ladycation last weekend because you could be sure I didn’t want to hit the beach fresh off this brutal winter weather. I really needed something to tone down those big, blue veins on the backs of my legs.

Really, I consider it a public service.

Here’s the difference between getting sprayed now at 47 than a decade ago: The technician needs to employ one of those sponge brushes to gently prop the skin that sags towards my knees up to get inside those wrinkles. It’s come to that.

I became concerned when the woman who sprayed me didn’t have me kind of bend over to spray my front, thus preventing my boobs from shading half my torso, and told her as much. She then came over and, one at a time, kind of lifted up my boobs with her fingers to get under there.

I mean, what else are you going to say in that situation? I treated it as if she was a doctor or a mammogram technician.

Before entering one of the back rooms to get sprayed, I was chatting with the owner and a mom waiting as her teenage daughter got sprayed for a prom. I had mentioned that I was preparing to go on a trip and the mom said it never occurred to her to get a spray tan before going on a sunny vacation. It never occurred to her? I even make a beeline to the spray tan place to spruce up for a big party.

The owner tried to encourage the mom to try a quick spray on her face to see what it’s like in case she wanted to come back before going on vacation the following week, but the mom demurred, saying she’d think about it.

Clearly, she must not be from New Jersey.

4 thoughts on “How to Get a Spray Tan”