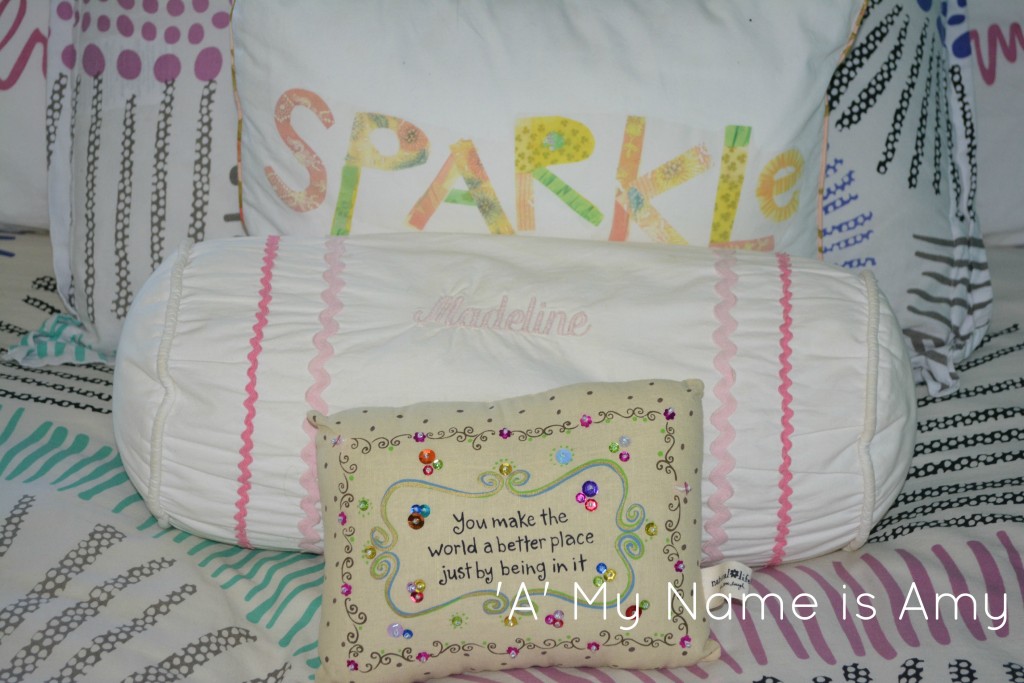 The high cost of a clean bedroom.

Sometimes, I can’t stand to hear some of the words that come out of my mouth.

Usually, they are the same words that used to come out of my own mother’s mouth. The ones that addressed particular behaviors and were repeated at regular intervals:

“Chew with your mouth closed.”

“Put your napkin on your lap.”

As it turns out, those same reprimands that were so annoying to hear as a kid are doubly irritating having to say as a grown up. As a child, I perceived those reminders as assaults against my character. I bristled every time my use of the English language was called into question or uncouth table manners pointed out by my mother.

It hurt my feelings.

But in the end, I walked away with very nice eating habits and an excellent command of the English language (in thanks, no doubt, to all those times I complained of boredom and was instructed to go read a book).

It’s a parent’s job to instruct. We are like the audio versions of the “How to Be a Person” manual. Sure, some of us are missing pages – hell, some of us have entire chapters ripped out– but for the most part it’s our duty to guide our youngsters towards becoming functioning members of society.

I always felt like my mom was a little too vigilant in this regard. It always seemed like she was jumping down my throat about the littlest offense. But then I had my own set of children and began to see things differently.

I am the oldest of eight siblings and now realize that while my mother was really on top of instructing me in the finer art of cleanliness and good manners, I’m pretty sure my younger siblings’ habits were not so hyper-scrutinized. I know my youngest is not held to the same standards as his big brother. Dinners when the eldest was younger included a lot of correcting of improper use of cutlery or failure to spread his napkin upon his lap. But when my little guy put his head down and started licking his plate not long ago, I found the act simply charming.

“Are you pretending you’re the cat?” I cooed, while his siblings looked on in horror.

As a result of more militant housekeeping when they were younger, my first two children still keep pretty neat-and-tidy bedrooms. Dirty laundry makes its way into the hamper and beds are generally made most days.

You would think such good behavior would have trickled down to the younger two siblings. You would assume they’d observe that type of lifestyle and embrace it as their own.

You would be wrong.

My youngest two children – an 18yo girl and 12yo boy – are lovely people. They are easygoing and team players and have great senses of humor. They also happen to be pigs.

The boy doesn’t seem particularly stupid. I mean, he’s done some dumb things that other boys his age sometimes do, but he just got promoted to the seventh grade so he must be doing something right. And man, he is a sweetheart.

And the girl – oh, my messy, messy girl. She resists doing laundry. Instead, she spreads her dirty clothing across every square inch of floor space in her bedroom, perhaps under the assumption that she is airing those items out for future wearings. Then there are a few piles of worn jeans and t-shirts shoved into corners in which she seems to be employing a method akin to composting. Whether she stirs the clothes at regular intervals remains a mystery but the piles definitely seem to be heating up.

And she’s not lazy. This school year she juggled three paying jobs and a full course load of honors and AP classes. Obviously she is capable when it suits her.

But how do you explain the empty plastic water bottles strewn across her desk and nightstand or the garbage can overflowing with crumpled printer paper and empty bags of Trader Joe’s veggie sticks?

So I’ve wasted a lot of breath over the years telling these two to clean up their acts.

“Put your clean laundry away.”

But these two do not perceive these admonitions as an attack on their collective character. Having a clean bedroom is simply not high on their priority list.

Over time I’ve struggled with how high cleanliness should be on my priority list, too. I mean, in the scheme of things, is an organized desk that important? I’ve learned over the years in the mom business that I’d rather have someone practicing their saxophone rather than making their bed. I am, however, pretty dedicated to not letting loose someone who chews with his mouth open into the world.

Which made what I walked in on Sunday night after I returned from dropping that messy girl off at college all the sadder.

In the days leading up to her departure, there were clothes all over her floor, which were joined by two giant suitcases awaiting the stacks of American Eagle jeans and Urban Outfitter tops to be squeezed inside. Her college crap had even spilled out of her bedroom and down the stairs into the den where a mound of Target bags filled with sheets and towels and lady products had started to grow.

When I last saw the room it was late Saturday night and I went in to say good-night and make sure we were still on for our 5:30 a.m. departure. By then, most of her stuff had made it into some type of bag. The giant duffel bags had been dragged downstairs and all that remained on her floor was her little turquoise Vera Bradley bag stuffed with what seemed to be the last-minute items – her packet from new student orientation and a tangle of chargers – and the new tote bag we bought online for carting her books in style around campus.

But the nightstand and desk were still in disarray and the pillows that decorate her bed – the queen-sized Ikea number she got for her 15th birthday with big drawers underneath and headboard with stacks of shelves, which took her three days to assemble by herself – were still scattered everywhere.

“Please try to leave your room clean,” I said as I kissed the top of her head. “At least make your bed.”

I know she had a lot on her mind. She was less than thrilled to have to leave for college just a week after graduating from high school. She didn’t really have time to wrap her head around all the changes awaiting her when she was diving right into it the thick of it.

So, like, why did I feel compel to nag? Can I not learn to control that dastardly impulse?

We hit the road a mere 15 minutes behind schedule, probably a new record for me, and I drove the four hours in the rain while most of the other passengers in the car dozed intermittently. We squeezed into a lot about a quarter-mile away from her dorm and tracked down a cart to carry her stuff upstairs. A college move-in day in never complete without a trip to the nearby Target or Wal-Mart so we climbed back into the car and set out to purchase another $200 in last-minute throw pillows and power strips. And of course, there’s the obligatory trip to the bookstore to check out her textbook requirements for the two courses she’s taking over the summer and to outfit her two siblings in her new school’s logo. Finally, after her bed was made and we oohed and aahhed over how cute it all looked together matched with all her Target dorm essentials, we decided to say good-bye.

And it was sad.

The other two kids and I drove home in still more rain listening to David Sedaris’s “Me Talk Pretty One Day,” which was good for lifting our spirits. We got home and heated up some stuff in the frig and I went upstairs to get changed into my pajamas (read: finally take off my bra), but when I got to the top of the stairs I took a left rather than a right into my own bedroom. I walked down the hall to the first room on the right to find the door closed, as usual, to ward off any ideas our cat might have about rolling around on my daughter’s bed (which grosses my 18yo out to no end).

I pushed open the door and my heart almost stopped. I couldn’t believe what I saw.

In all those years of asking/suggesting/demanding that she clean her room, my daughter would eventually comply but never 100 percent. There was always crap piled under her printer table or clothes shoved onto her closet floor.

But on Sunday I opened the door to something out of a magazine. The bed was made and the throw pillows artfully arranged. The desktop had been organized and no clothes lurked at the bottom of the closet. The hangers draped with clothes that usually hung from her floor lamp had also been put away. 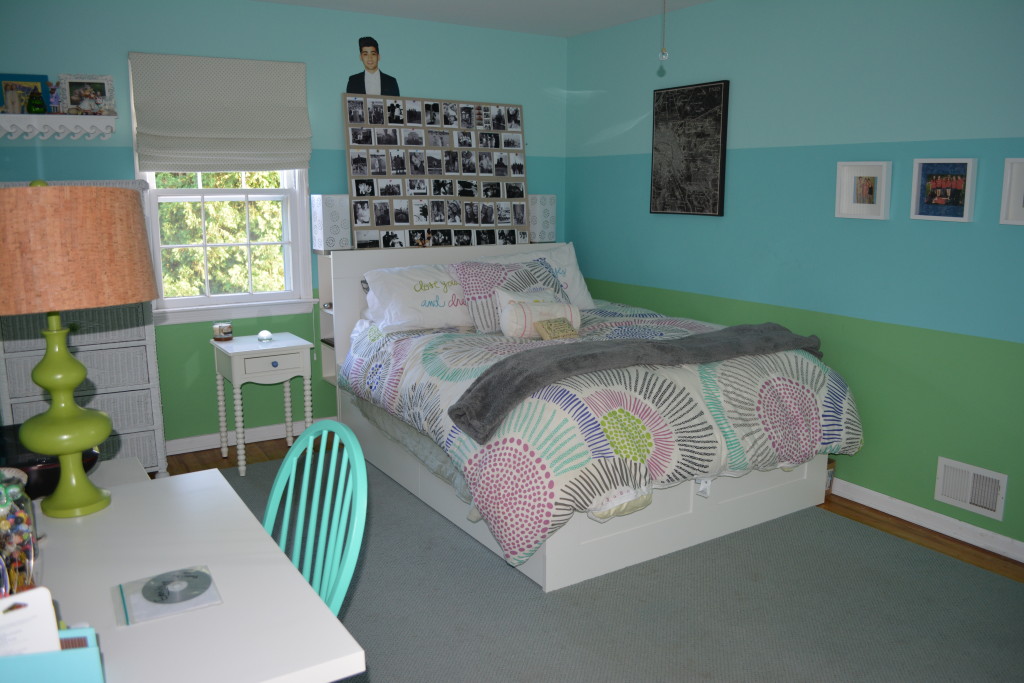 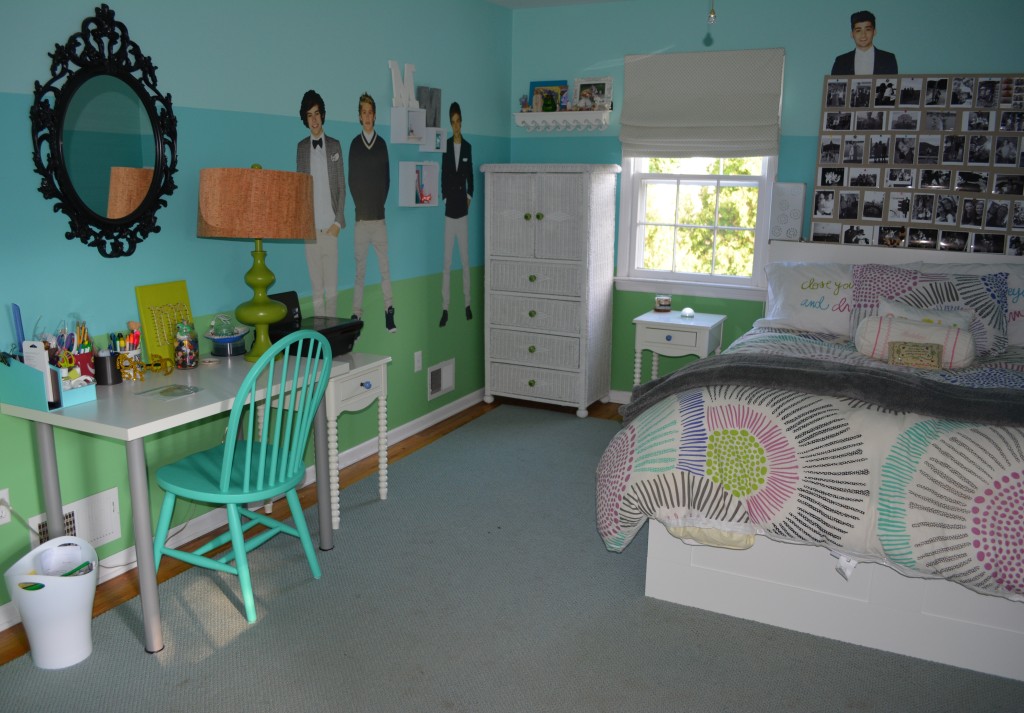 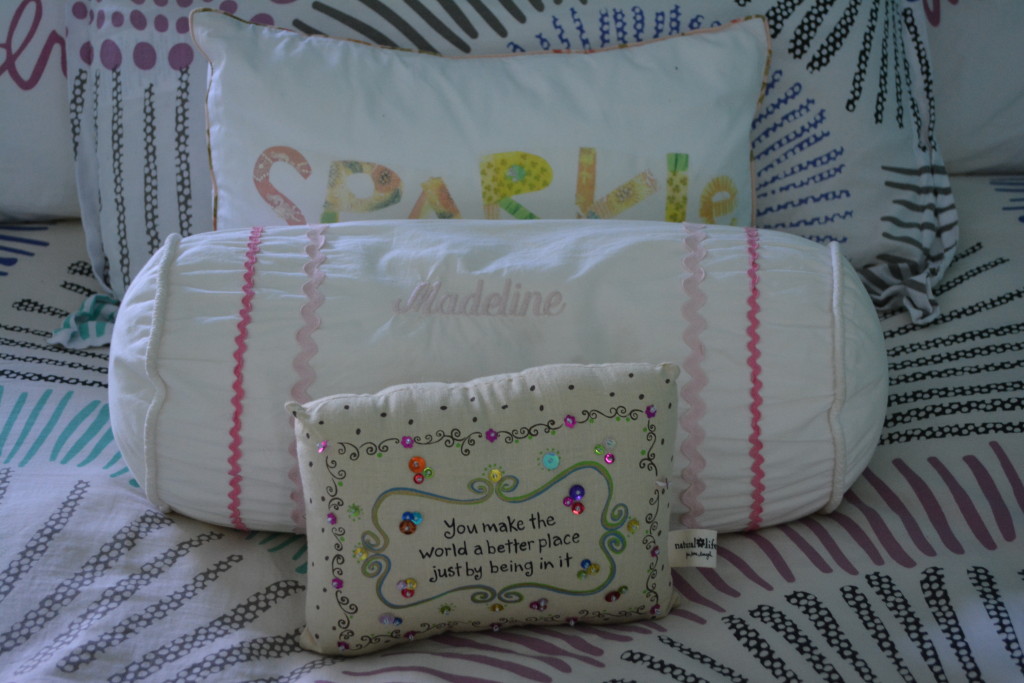 The high cost of a clean room.

She had outdone herself.

And now it all just sits. Empty. Lifeless. All that energy that used to fill up every last inch of that room has now relocated 263 miles west of here.

So now I have that made bed I’ve been dying for, along with the clean clothes put away and emptied garbage pail.

I just hate the price I had to pay to get all of it.

But good luck to her new roommates. They’re gonna need it living with that girl.

You can sign up to get all my latest posts sent right to your inbox lickety-split by typing your email into the “Never Miss a Post” box. You can also follow me on Facebook and Twitter. Talk about a miracle (winky face).

9 thoughts on “How Much Would You Pay for a Clean Bedroom?”