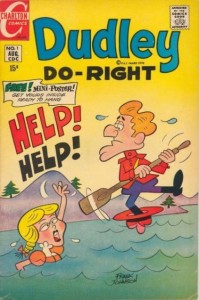 I’ve spent most of my life being capable. Adaptable. Resilient.

I’ve never really been one of those damsel-in-distress-types. But sometimes, I’d really like to slip into that role. I’d really like some Dudley Do-Right to come galloping to my rescue and, like, fix my running toilet or figure out how to move my router.

But because I don’t really come off as needy, I’m generally left to fend for myself. The upside to this is that it means that folks assume I am on top of things. The downside is that I’m outside shoveling snow and trying to start generators with all the husbands while the wives sit inside and watch Kelly and Michael.

And when I was married, I didn’t have to worry about things like snow and generators either. I live in a part of the world where people toe a fairly traditional gender line. Most of the dads go to work in offices and the moms stay home with the kids. Men do the manly things like mow lawns and get rid of dead things that show up in and around their yards and women make dinner and mail out Christmas cards (although I recently met a guy who actually took on that job each year when he was married and I am fascinated by that). Before my husband moved out, I never even touched a snow shovel.

Now I get to be in charge of everything. The lawn. The Christmas cards. Dead things. When I was married, I couldn’t even handle the feel of a dead bunny that weighted down the end of the net I was trying to scoop it out of the pool with. It took me about 20 minutes to stop carrying on and lift the thing out of the water and into the waiting plastic Target bag and then even more time to psych myself up to carry the bag to the trash can in the garage.

Now I’m an expert at removing stuff that ends up dead somewhere in my yard. A few years ago, I even helped my neighbor Susan get rid of some weird dead bat that appeared at the base of the pine tree in her front yard. I went to my house and fetched one of the hundreds of plastic sleeves I store under my kitchen sink that my newspaper is delivered in each day – it’s one of those items I feel compelled to hoard, like shopping bags and shoe boxes (you never know) – and marched back to Susan’s to pick up the bat carcass. I slipped my hand inside the blue plastic bag and picked the bat up off the ground and then pulled the bag back over my hand so that its body fell to the bottom of the bag, which I tied off and handed to Susan to throw into one of her trash cans.

“Tell Michael I said, ‘You’re welcome,’” I told her, since I had just done his job for him.

But my two younger kids and I are staying with Michael and Susan over spring break at their new digs in Hong Kong so I guess the Universe has more than repaid me for helping a brother out and getting rid of the dead bat so that he didn’t have to.

But really, I’m okay with being stuck with the dude jobs around here. Number one, it’s a small price to pay for not having to put up with someone’s shenanigans just because they’re good snow shovelers and number two, it puts my life in more of the Free to Be, You and Me alignment that always appealed to me as a kid.

But it’s still a work in progress.

We woke up this morning to discover that the BLIZZARD OF 2015, the storm that was predicted to dump three feet of snow on my yard that had me out yesterday combing the stores for “D” batteries and loading up on water (I have serious Sandy PTSD), was pretty much a dud. I’m a terrible eyeballer of measurements, but it’s safe to say that we didn’t even get one foot of snow, much less three. But it still needs to be managed. We will still need to get out there and clear the driveway and path to the front door like good citizens.

But I’m sitting here in my bed waiting to see when my neighbor Bill starts to shovel. I use him as my snow removal barometer since he seems to be really on top of this kind of thing. I usually look out our front windows after storms to monitor his activity. I mean, he even owns a snow blower, which is a clear signal that he takes his snow removal very seriously. Until I hear that motor, I know I can remain here tucked under my covers and enjoying the lazy morning like all the other mommies.

My girlfriend across the street – you know, Punky’s mom – texted a little while ago to ask if my little guy would help her teenaged son shovel the driveway of some of our neighbors who are well past the shoveling stage of their lives.

I had also mentioned to my son as he put on his boots that he should also shovel the driveway of the elderly couple next door to us and told him that I would be out in a bit so we could get going on our own driveway.

“What,” he squeaked. “I don’t want to have to shovel three driveways.”

So, maybe he’ll live more in a world where men send out Christmas cards and make dinners and women go outside and shovel snow.

Which is where this damsel is headed right now.

Let me guess: Your husband’s outside shoveling snow and you’re inside trolling the Internet. Good for you. Why don’t you sign up to get all my posts sent directly to your inbox? Just plug your email into the “receive new post in your inbox.” Oh, p.s., it’s free and something to do while you drink your cocoa in your yoga pants.

18 thoughts on “How I Learned to Shovel Snow”