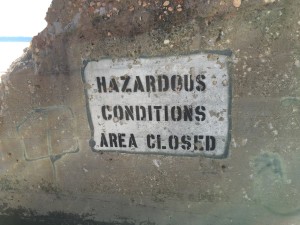 When we last spoke, I was telling you about the house I just bought. You know the one, the Not-Too-Big, Not-Too-Small, Just-Right-House? The one with personality to spare?

Anyway, since then I’ve had a bunch of people tell me they’d love to get a virtual tour of the joint, and as all I really think about these days is the house – from paint colors to appliances to exactly where my daughter’s giant, queen-sized Ikea bed is going – I thought this would be an easy thing for me to start to share. Please note that all “before” photos I swiped off Zillow and are courtesy of the former owners and their realtor. 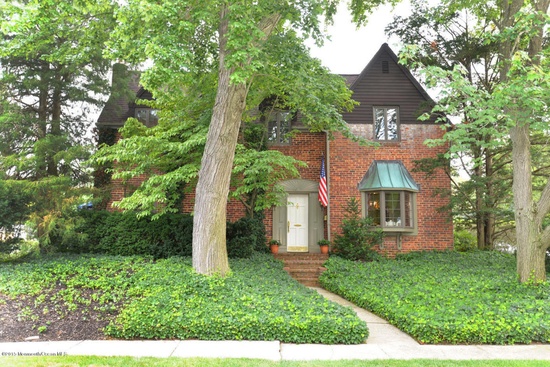 All that ivy and the copper bay window? Sigh. I can’t even.

First of all, the house was built around 1929 by someone – one of my friends joked he had to be Italian – who was freaked out by fire as no wood was employed in its construction. Instead, both the exterior AND INTERIOR walls were built of bricks and cement block and the floors (both first and second ) sit on top of steel, like, girders and a layer of concrete. I mean, it’s nuts and something – I’ve come to learn – you don’t really see in suburban New Jersey houses. Apparently this type of construction is seen more in city brownstones and the few houses in town that this guy built — including the house next door to me — are kinda anomalies.

“It’s tornado-proof,” my builder told me the first time he came to look at the house, and while his head shaking made me a little wary, it also made me feel kinda safe. I mean, even though it will probably prove challenging nailing stuff to its walls, I can rest easy knowing no Big Bad Wolf will ever be able to blow my house down. I am legit bullet proof now.

I’d also like to note that the house was beautifully cared for by its former owners, who made super-smart additions and improvements to it in the almost-40 years that they lived there. I keep discovering all sorts of wonderful features, from lights in closets to beautiful ceiling molding throughout the house that make me appreciate their attention to detail.

One of the things I like most about the house is that, unlike many more modern houses that embrace the “open floor plan,” my house boasts many smaller rooms. Lots of nooks and crannies to go off and, say read a book or write a blog post (or when it comes to my kids, watch Netflix).

When my youngest sister – who’s in her mid-30’s with two little kids – first came to check out the house, she only saw walls she wanted to knock down. “I’d open this whole thing up,” she said, pointing to the wall that separates my living room and sun porch. 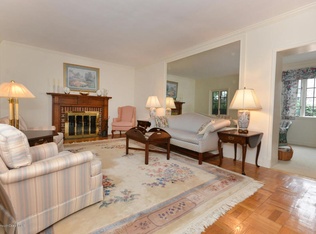 See that wall behind the couch in the living room? The one with the giant mirror (it’s not a doorway)? That’s what separates me from the inmates.

I promptly told her she was crazy.

But when I was her age, that’s exactly what I did to the house we were living in. We knocked the wall down between the dining room and kitchen and widened the doorways of our living room and den, thus opening up the whole first floor.

Here’s what parents of young children – who want to be able to monitor their little ones toddling around while they make dinner and make sure that their 9-year-olds aren’t watching Family Guy – don’t understand: there will come a day when all that togetherness will get kinda old. They’ll want walls – ones made of brick and cement – between them and their increasingly-surly-faced children. While it seems a good idea early on to bring the family-bed concept downstairs to the living area, there comes a time when you just want to watch the evening news without Lester Holt being drowned out by the latest episode of Pretty Little Liars or work on your laptop without someone frying an egg five feet away. Some day Family Guy will be the lest of your concerns, I’d like to tell them.

That wall between my new living room and sunporch will give me space to set up my desk to write in my own private office space and no longer have to squeeze clever thoughts in while sitting at my kitchen table and telling people where to find more milk. I will be blissfully unaware of frying eggs and what Leslie Knope is up to in Season 5 of Parks and Rec. 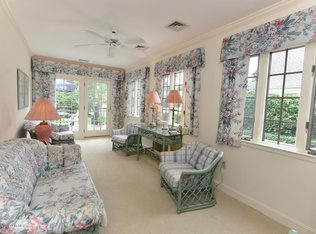 I’ll set my desk and books up in this room, that seems to stay bright at all hours of the day and has enough windows to provide hours of distraction from Facebook. 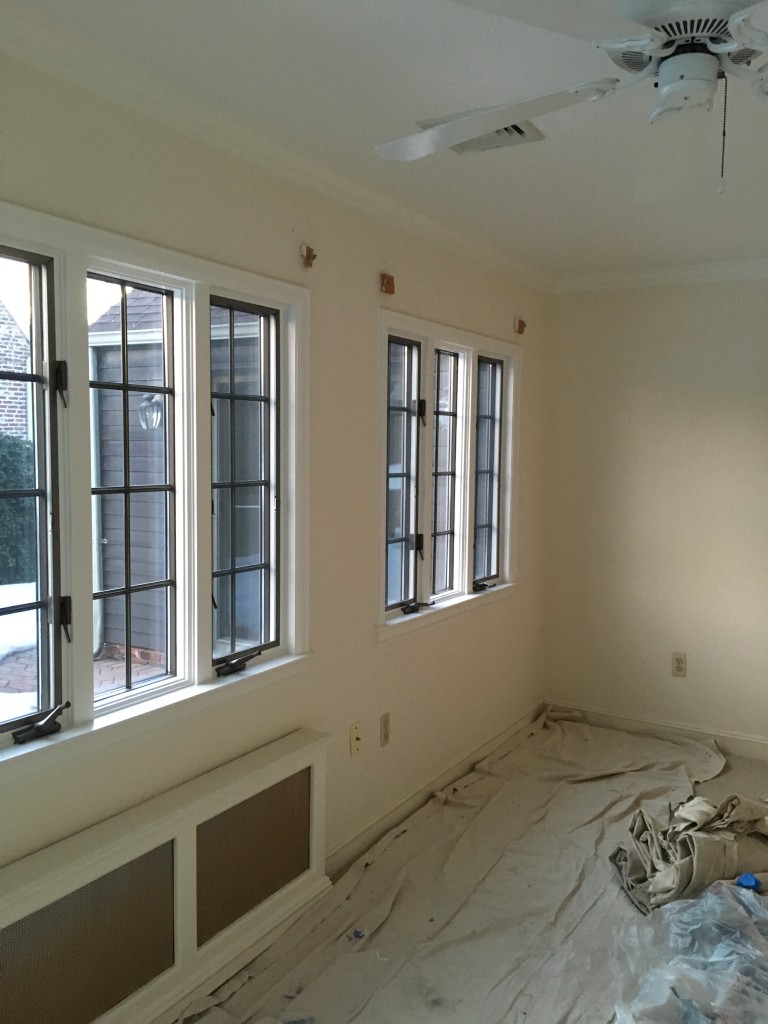 Window treatments down and ready for painting.

As I mentioned in an earlier post, one of the things about the new house that turned me off early on was its small, dated kitchen. But I’m a spoiled brat. We redid our kitchen about 10 years ago with lots of bells and whistles and it still felt new to me. I still loved being greeted by all those creamy cabinets reaching to the ceiling and shiny granite countertops when I came downstairs each morning. And we lived at our island, where we hang out and eat most of our meals. It’s a big part of our day-to-day. 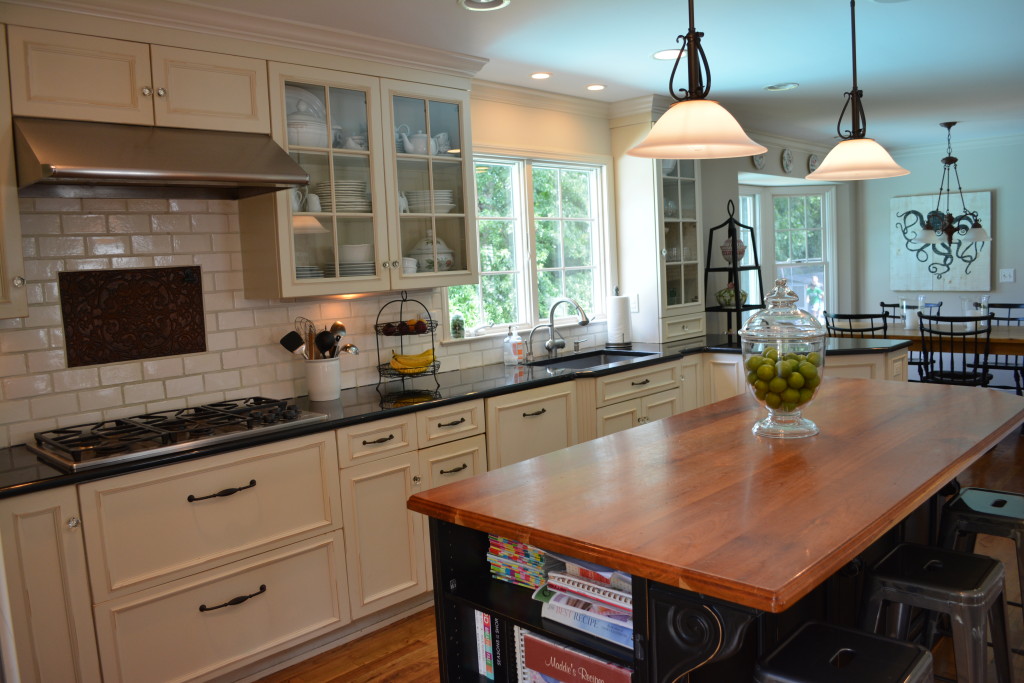 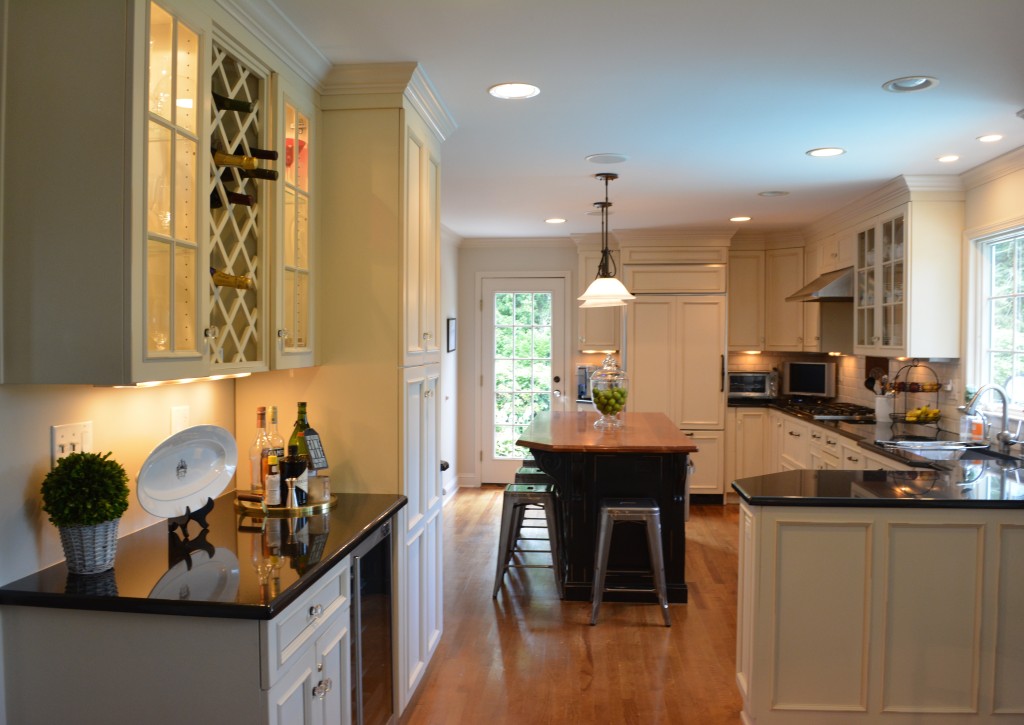 In contrast, the kitchen in the new house was small and had soffits between the cabinets and the ceiling, with limited cabinet space and nowhere to sit and eat your cereal. 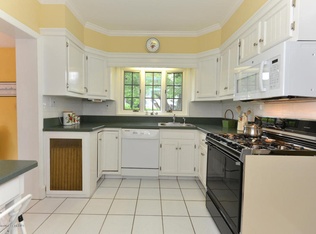 This kitchen would have made me swoon back when I first married with its painted white cabinets and Hunter green counters.

There was only one solution: the wall between the kitchen and the dining room had to go. 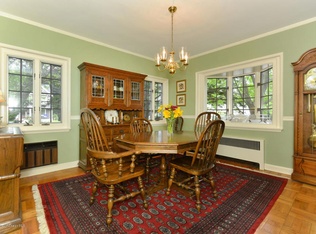 The kitchen is to the left of the dining room in this photo. Check out the parquet wood flooring that runs throughout the house.

Not only would that brighten the kitchen up a bit but would also give us a place to pull up some stools.

So a few days after I bought the house, this happened. 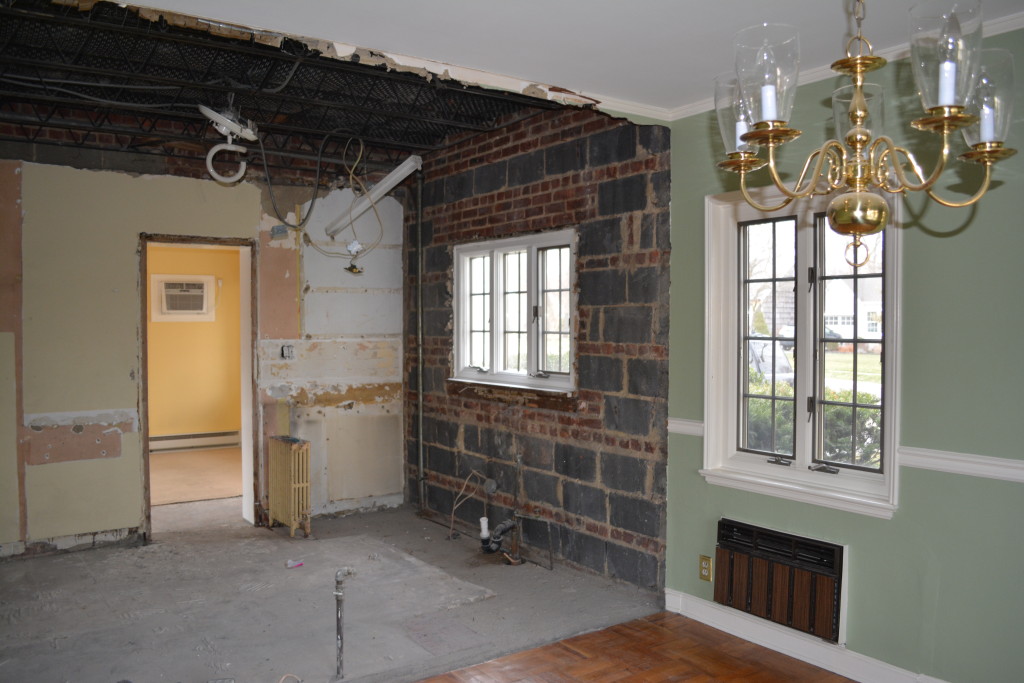 And the view towards the dining room: 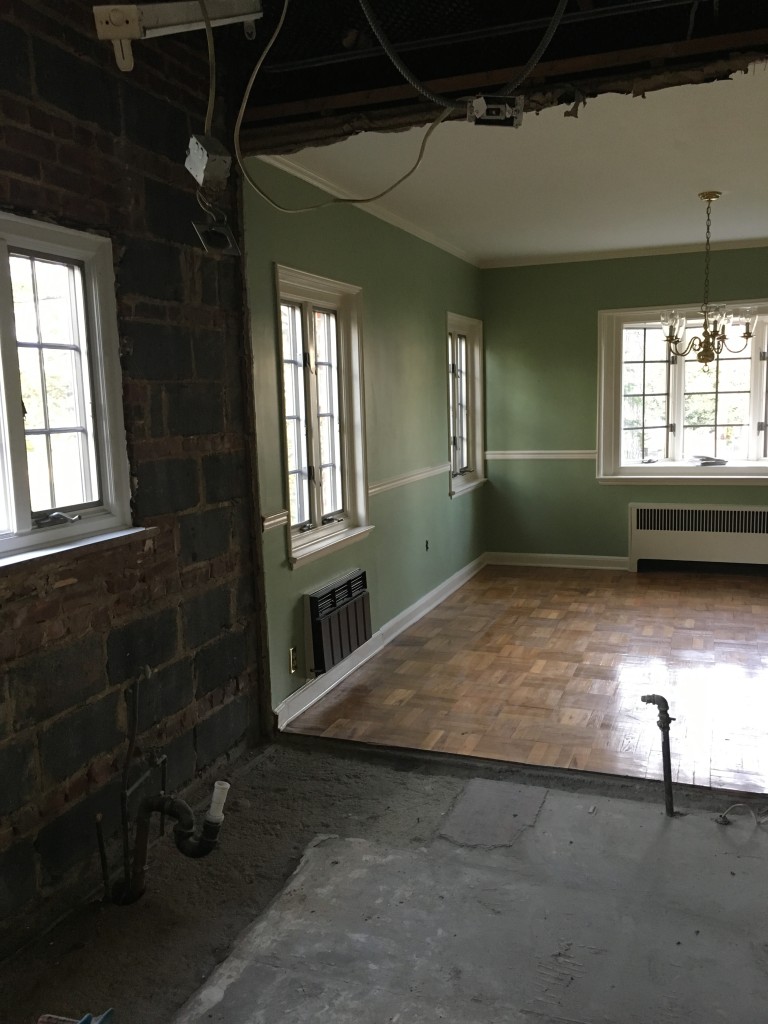 The kitchen will now benefit from the two casement windows in the dining room and have the deep bay window as a focal point. 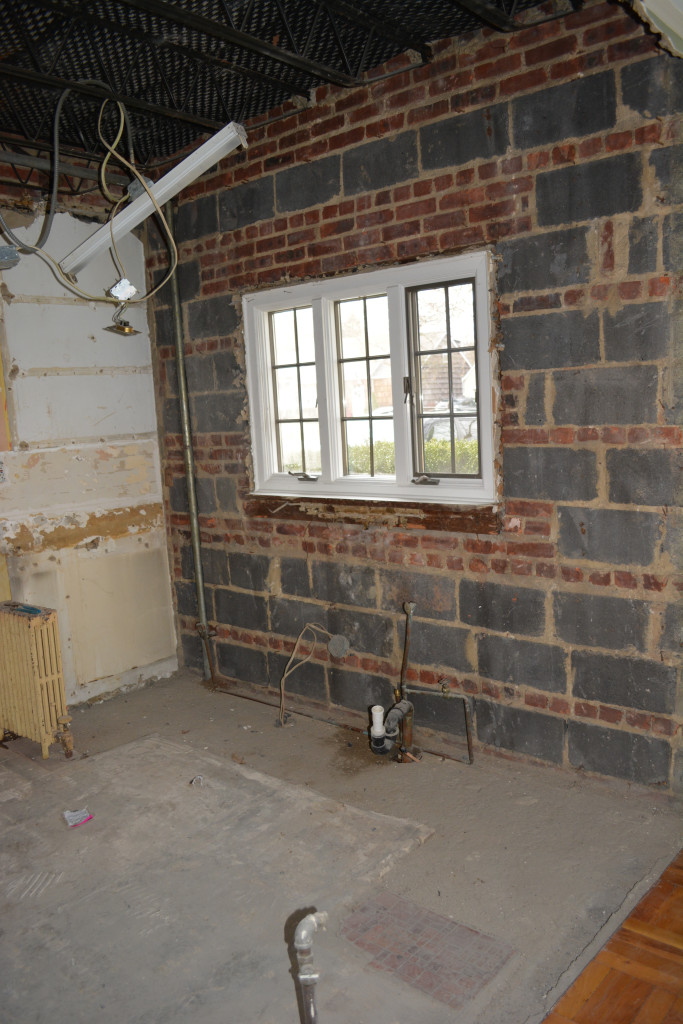 The sink will now be centered under the pretty kitchen window flanked by a dishwasher and pull out trash bin, with a peninsula running between the kitchen and eating area with plenty of room for a few stools so I can resume my role as short-order cook.

My mom and sister would have liked to see more walls go down or doorways moved to accommodate a better layout and make the kitchen a little less choppy, the way they do in magazines and on HOUZZ. But in the end, because I didn’t really want to spend any more money and was wary of the challenges presented by those brick and cement walls, I decided to work with what I had and consider the choppy new layout part of the house’s many charms. I can live without perfect.

So, with about nine days before all of our belongings are moved into this chaos, some things are moving pretty quickly. Wallpaper has come down from the hallways throughout the first and second floors and the painters are painting every inch of the interior — even closets and ceilings. I’m staying in this house forever so I’m hoping this is one and done in that department.

I also hired someone to refinish the floors throughout the house and replace the white tiles in the kitchen and back hall with the same parquet design in the rest of the house. I am thrilled with the results thus far. 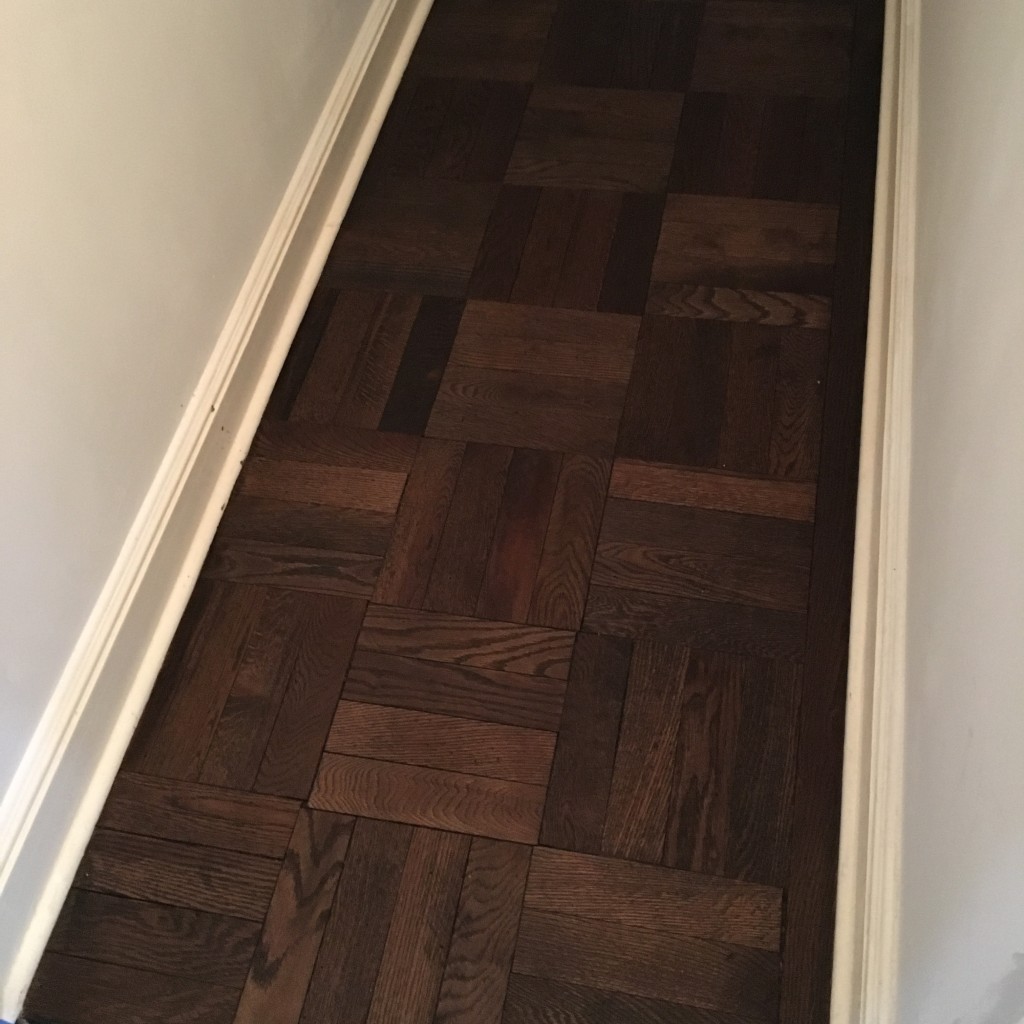 Darker stains, like Ebony or Jacobean, tempted me but am glad in the end I went with the slightly lighter Dark Walnut. Anything else would have been too dark in my house. 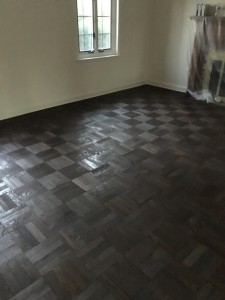 Here’s the new stain in the living room. 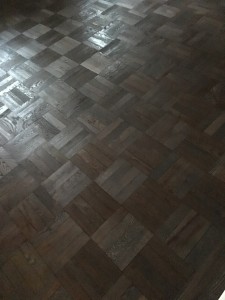 I LOVE how it almost has a checkerboard feel, the texture and variation of the wood color.

So that’s where we are with the downstairs right now. Pretty much, there are a whole lotta dudes traipsing in and out of my sweet house doing unmentionable things in my potty and leaving cigarette butts on my lawn. But it is what it is and I know it will all be worth it in the end.

I’ll share what’s going on upstairs with you soon. And if you have tips — for moving, renovating or surviving said renovation — by all means, share.

I could use all the help I can get.

21 thoughts on “Take a Peek Inside My New House”