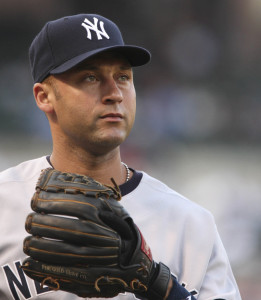 This is how much I loved my ex-husband back in the early days, when — even though I grew up in a family of lifelong Yankees fans and, like every other girl in the seventh grade circa 1979 I was totally in love with Bucky Dent — I turned my back on the pinstripes and became a Mets fan.

That is how crazy love can make you.

I’ll admit though that back then rooting for the Mets wasn’t as much of a stretch as it might be seen as today. The team had just come off of its big 1986 World Series win and Darryl Strawberry was best known for hitting home runs and not his future struggles with substance abuse. Even Jerry Seinfeld made it kind of cool to be a Mets fan when he featured Keith Hernandez in two episodes in 1992 as a potential love interest for Elaine. And also, a possible spitter.

Everyone I knew growing up across the river from the Bronx in northern New Jersey in the 1970s was either Irish or Italian. But everyone was Catholic and everyone was a Yankees fan. I mean, I knew Mets fans existed – kind of like Jewish people—but I just never met any of either until I was older.

But by the time I was in college I’d become estranged from my father and his family and pretty ambivalent about sports in general. Like, I religiously tailgated before every football game during my four years at a big state school but never once, not even one time, did I attend an actual football game. Other than playing running bases and throwing rocks at each outside during lively games of War growing up, my siblings and I weren’t encouraged to play sports of the organized variety. I lettered in smoking and drinking and general jackassery in high school.

But my future ex-husband was a huge sports guy in general and Mets fan in particular and I was so besotted with him in those early years out of college that I’d sit on the couch and watch games with him on TV. We even went to a doubleheader one super-hot July afternoon pre-children – and it was Banner Day which consisted of an endless stream of rabid fans parading their banners around the stadium — and I don’t even think I complained once. I’m sure big plastic cups filled with foamy beer helped.

Once we got divorced, I thought, “Well at least now I can go back to being a Yankees fan,” but it turns out that ship had sailed. It’s not like changing your last name. I just don’t have the same allegiance to the team that I did growing up when my aunts, uncles, dad and brothers cheered for the Yankees. That’s probably what I liked the best then anyway, the legacy of being a fan. Of being a part of a great Yankees tradition.

So I was surprised by my reaction when I saw the new Gatorade commercial featuring Derek Jeter. I get teary-eyed every time I watch it – the way the crowd swarms around him as he walks through the Bronx, the reactions on faces young and old and then the roar of the fans as he enters the stadium with Frank Sinatra singing, “I did it my way” in the background. It’s pretty epic.

Initially, I thought it was just me. That I was easily mesmerized by the whole Jeter farewell tour and the legend he seems to have become. But as my 17-year-old daughter and I were on the final hour of our long drive home from visiting her siblings this weekend and our audiobook (Jennifer Weiner’s “All Fall Down” loved it) finished leaving us time to kill with her bad music and chitchat, I asked her if she’d seen the Jeter commercial.

She indicated she had not and I go on to describe it in detail and I noticed her working on her iPhone and accused her of not listening to me and she’s like, “Mother, I’m just going to watch it on YouTube.”

Mark my words, in a decade there will no longer be any point in actually talking to each other. Conversation will be as outdated as dial-up Internet service and audio cassettes.

And then I hear Ol’ Blue Eyes start to sing and see out of the corner of my eye the flags fluttering atop the Brooklyn Bridge at the start of the black-and-white video and all the excited chatter as fans realize Jeter is standing in their midst. I pulled off the Parkway and paid my final toll as I heard the music swell and the crowd cheering in the final seconds I turned to my daughter to ask what she thought and she looked up from her iPhone at me and I saw her big blue eyes filled with tears.

“Oh my god, that was amazing,” she cried, wiping at her eyes. That was quite an endorsement, coming from someone who is probably even more ambivalent about baseball, the Yankees and Derek Jeter than I am.

On Thursday night, my 11-year-old son will travel to the Bronx with his dad to see Jeter play his last home game. I’m excited for him – for them — to get to witness something what will go down in baseball history.

I now get why my ex – a dedicated Mets fan — would have gotten those tickets months ago. I understand how Jeter’s career kind of transcends your allegiance to a team and whether you even really care about baseball or the Yankees.

Jeter is as iconic as the Yankees, or Sinatra or the city of New York. He’s a true sports hero at a time when they seem fewer and farther between. A feature story in this week’s New York Magazine quotes former Yankees Manager Joe Torre crediting Jeter’s parents for keeping him grounded.

“He felt comfortable in his own skin,” says Torre. “Other players need to be validated. Derek doesn’t need the attention.”

And even though I have a DVR full of shows to catch up on (“Outlander” wedding episode and Scandal Season 3, y’all), I might have to tune in Thursday night and watch The Captain’s last turn at bat.

And if that’s not a miracle, I don’t know what is.