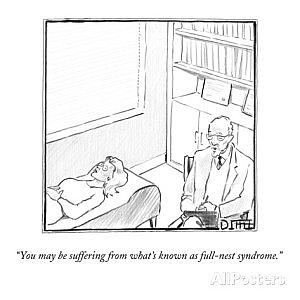 My all-time favorite New Yorker cartoon says it all.

Lately, I’ve taken to sitting at the head of the big pine table in my kitchen to write, my black-and-white slipcovered chair backed into the bay window that bumps out that back corner of the room. Outside the window over my left shoulder, there’s a tremendous amount of chattering these days coming from the finches who have claimed the white birdhouse that towers above the middle of the garden behind my house.

They’re awfully busy, the little birds, as they flit in and out of their new abode, perched high atop a PVC pipe onto which the vine of a clematis I planted at its base years ago climbs and wraps its tendrils. Soon, my new neighbors will be surrounded by the vine’s big purple flowers, whose tightly closed buds seem be looking up at the birdhouse, their noses pointed in the air, searching for the source of all that chattering.

I’ve noticed that one of the birds is almost defiant as it cranes its upper body out one of the birdhouse holes, chirping aggressively at some unknown predator. He quickly swoops off his ledge and darts back into the yard, only to return with yet another thin twig or piece of debris clutched in its beak to furnish the inside of the birdhouse and prepare for the arrival of its newest family members. 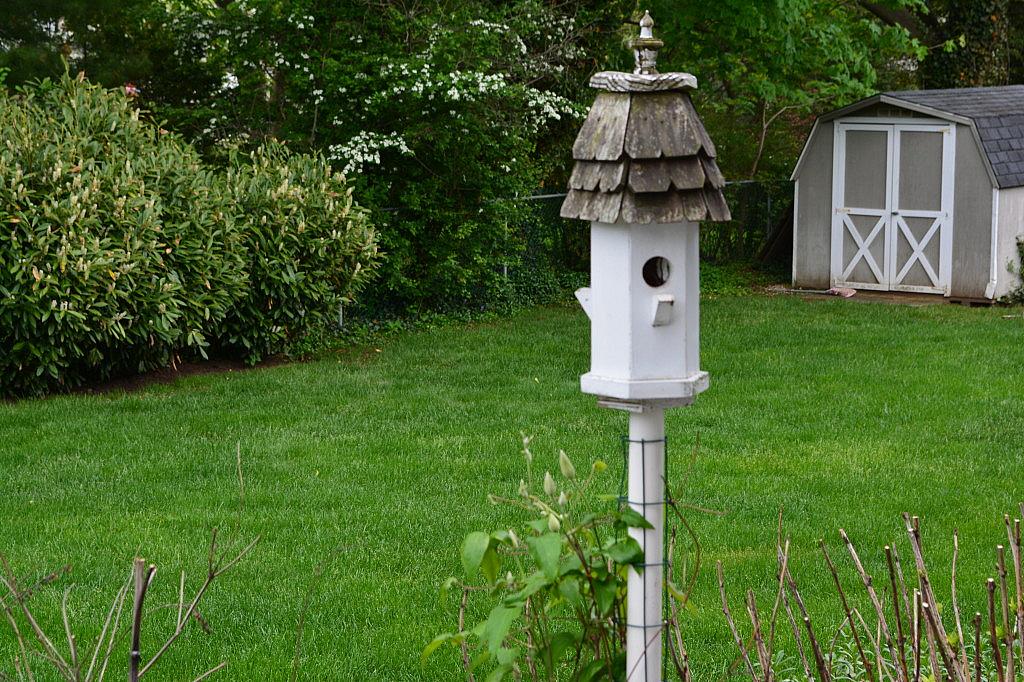 The view from where I sit.

After the long, cold winter sitting in my kitchen surrounded by the quiet of closed windows and school days, May has brought with it a lot of noise and activity, wafting with the warm air through my window screen.

According to my calculations – already a dangerous proposition considering my math skills – I have about 60 hours left of general peace and quiet inside my own house until mid-August. On Wednesday, some time in the early evening, my two college kids will arrive home for summer vacation and the house will be filled once again with debris, defiant chirping and the unpredictable dives and swoops of so many personalities living under one roof.

Prior to their arrival, I’ll be flitting in and out of grocery stores and Costco to make sure our nest is ready for them and stocked with the organic milk and cold cuts I know they like. It makes my little birdies so happy to return home to a Tostito-laden pantry.

Okay, I know, I’ve written about this phenomenon before at some length, my struggle with school breaks. And I also know it pisses my two adult-ish children off, this suggestion that having them home is a bummer or burdensome in some way.

What they fail to understand is that it’s not necessarily them, per se, that’s got me so agitated. On the one hand, it’s the addition of extra people who need to be fed, whose laundry needs to be washed and whose personalities need to be managed. And on the other hand, my two oldest children also happen to be the more challenging half of my brood, especially my son. But luckily, their individual Instagram posts to me yesterday for Mother’s Day indicated that they both might know that.

My 20-year-old daughter posted a picture of the two of us mugging for the camera selfie-fish-lips-style at a football game at her school in the fall and wrote, “Thanks for putting up with my crap for 20 years. Love ya ma.”

Plus, she added an emoticon at the end and if you and I have ever texted, you know I’m crazy for emojis. I sprinkle my communication with hearts and the thumbs up signs like a 14 year old.

Her older brother posted a picture of me taken last summer before a “Heroes and Villains” costume party I attended dressed as the less-than-warm-and-fuzzy mother from Arrested Development (black St. John’s knit suit, pearls and my hair in a perfect ladies-who-lunch helmet). 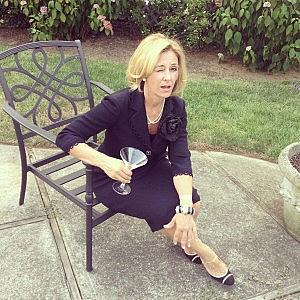 Lucille Bluth: I don’t understand the question, and I won’t respond to it.

“Happy Mother’s Day to my very own Lucille Bluth. Putting up with me is a handful but you’ve managed to do it for 21 whole years. God bless. Love you Ma,” he wrote and added to his post the cat with the heart eyes emoji that’s one of my favorites.

Clearly they have the self-awareness to acknowledge that I’ve been “putting up with” a lot of challenges for over the last 20 years.

On the flip side, I missed having those two divas around yesterday to help celebrate Mother’s Day. When the kids were young and I was still married to their dad, Mother’s Day was filled with family. Often, we’d go to church, where other moms would admire my new macaroni necklace or glittery pin, and then to brunch at our beach club, the boys in crisp new chinos and the girls in bright cotton cardigans.

Other years, I’d host a brunch at our house and the kids would run around outside on the thick spring lawn with their cousins while the grown ups milled around the kitchen sipping mimosas.

One year, after my husband had moved out of our house, I flew to Ohio over Mother’s Day weekend to spend time with a good friend while I struggled with whether to end the marriage, and returned home on Sunday for a dinner out at a local pizza place, the six of us crammed in a booth eating garlic knots.

So it was odd to be just me and the two kids still living at home full-time yesterday for Mother’s Day. We went out and hiked for an hour in the woods, which they could not complain about, and then picked up some salads and sandwiches (compliments of my teenager) at our favorite shop nearby and ate sitting around our kitchen island. The kids went outside to play with neighbors and I sat on my bed and read for hours. We showered and went out to an early dinner where we sat by the window overlooking the river and talked about how it was our last weekend of quiet before their siblings returned.

The waiter delivered our drinks and I toasted the end of another peaceful year and we watched a jet ski cut through the river as we raised our glasses to drink.

Here’s the good news: Unlike the summers of long ago, when I would cart the four of them to the beach early each day — our cooler packed with crustless sandwiches and juice boxes — the three older kids will be pretty busy this summer. There are internships, babysitting jobs, classes and the gym to keep them all pretty busy and out of my hair.

And for the first time in a few years, I don’t have to cobble together sports camps and babysitters to farm my youngest guy out while I worked from home during the summer. With no job on the horizon, I get to spend my summer on the beach with him, letting him surf and swim with all his friends in town while I try to get through the tower of books on my nightstand.

I figure that over time, with some of the kids graduating and moving back to the nest after college and others just leaving, all four of the kids will at some point have the opportunity to discover the joy of living in a reduced family. They’ll experience the dinner table set for just two or three people, never having to wait their turn to do laundry and having a quart of milk last longer than one day.

But maybe those birds out back know something I don’t because they really don’t seem to stick around once their nest empties out. One day they’re carrying on, squawking and pooping all over the place, and the next day they’re gone. It’s like they just pull up stakes over night.

I think it’s just going to take a while for me to find out whether they are onto something.