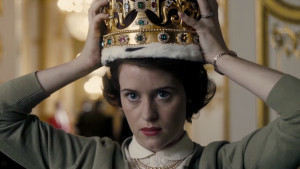 Lest my readers think that all I do is fold yoga pants all day long, I’d also have you know that I watch a lot of television. As such, I consider myself a bit of an authority on what’s available for your viewing pleasure these days because if I’m not watching it, one of my four kids most definitely is.

As you might have read on Facebook, in between kitten videos and all that fake news, the holidays are upon us and you’ll need a reason to take extended breaks from all that family time and alleged good cheer. And it seems these days saying, “Sorry, I’ve got to catch up on my show,” is passing as a valid excuse for why we can’t (FILL IN THE BLANK):

Okay, I made that last one up because when I try to avoid bathing for extended periods my children start to complain. But you get my drift. Having a “show” can be helpful for a lot more than just passing the time. It could literally save your life (cue dramatic bom-bom-bom).

I thought I’d introduce shows that aren’t necessarily the ones that everyone is talking about. Obviously, I’m totally committed to a lot of them. I’m completely up-to-date with “Game of Thrones,” “House of Cards” and “The Walking Dead” (btw: What is up with this season? Enough with Negan already. Somebody please bash in his skull.). I watched all of “Mad Men,” “Breaking Bad” and “Gilmore Girls” (btw part 2: I wish I could insert emojis here to really express how crazy I thought the ending was.). And I’ve kinda stalled on a few shows I really loved for a season or two but just can’t finish, like season two of “Bloodline” and “Transparent” and season three of “The Americans” and “Orange is the New Black.” And I didn’t get all the way through season one of “Girlfriends Guide to Divorce,” “Odd Mom Out” and “Crazy Ex Girlfriend,” so I don’t know if that says something about the shows themselves or my struggle with follow through.

But there are a bunch of great shows that I watched and totally loved that are a little more off the beaten tv track. So, in no particular order:

What’s in your queue? I’m hot to watch “Poldark” and maybe finish up some of those shows I left hanging mid-season.

Or, maybe I should just read a book for once, because I just bought this and this.

What are your faves? Sign up to get all of my latest posts sent right to your inbox by typing your email into the box below and new posts will arrive without you having to remember to look for them. Everything should be this easy. You can also follow me on Facebook, Twitter, Instagramand (what the hell) Pinterest.