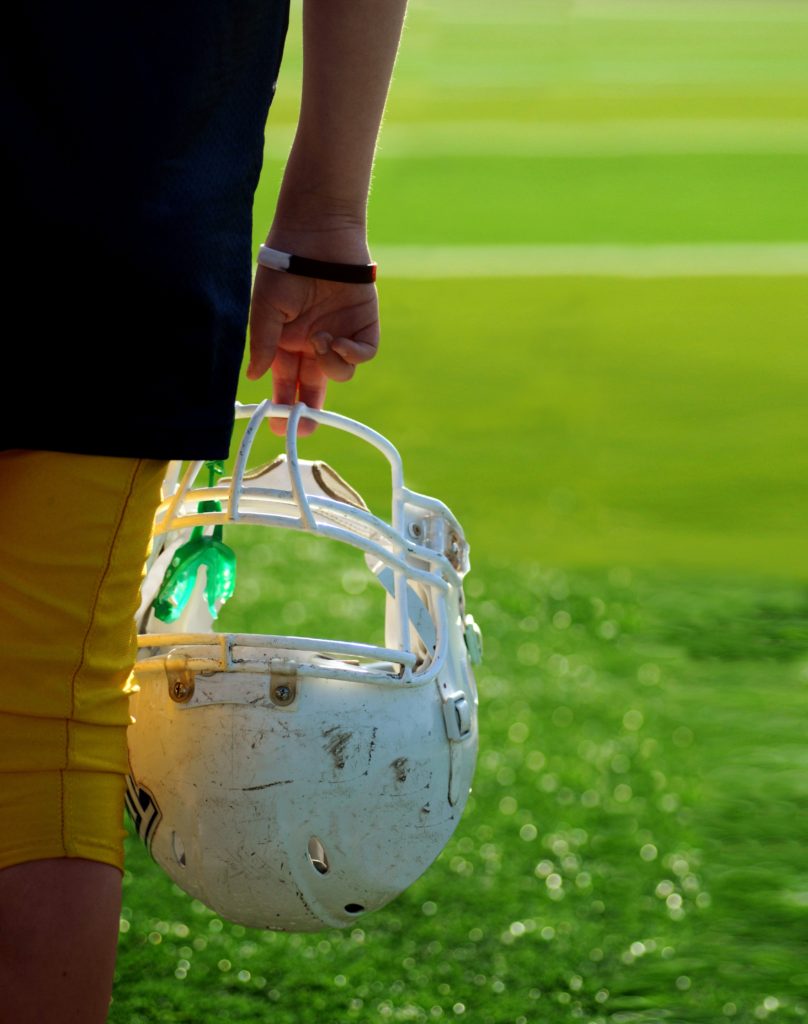 On Monday during my son’s junior varsity football game against the local Catholic school, he tackled a kid running with the ball who fell on top of his head and kind of knocked him silly. It was one of those situations where the game paused and all the players took a knee while my son sat there looking dazed, and then we all clapped when he got up and moved to the sidelines, where he immediately got pulled out of the game.

When I told my friend Dan a few days later that my kid had a very mild concussion from the incident, he asked, “Are you surprised?

“He plays hard,” he continued, as I pushed 10-pound weights over my head and thought mean things about him. “You had to know this was going to happen.”

This summer when I took my football player for his annual physical, we ended up seeing a different doctor than our usual pediatrician. He’s new to the practice, I’d never seen him before, and he was very tall and spoke with an accent that I pegged as Russian (which was later confirmed), based on how opinionated he was about everything. Especially football.

“You play American football and not the real football?” he asked all jokey, and went on to tell us that he would never allow his own sons to play America’s favorite sport, and then pointed to his head. “It’s very bad,” he said.

And I smiled and shook my head and was like, “Well, thanks mister. I guess I suck,” and we later made fun of him on the car ride home, doing our best Boris and Natasha.

The decision for my youngest to play football in high school was mostly my own. He’d never really played before, but I pushed him to try freshman football because A: I knew he’d like it, B: I thought it would be a good way for him to make some new friends and C: I envisioned myself in the stands wearing a shirt with his name on the back cheering for the team when he was a senior. His two sisters liked the idea, too, and helped me coerce him into showing up at the high school that summer for a workout with the rest of the freshman team.

And he loved it.

He’s a sporty kid and a decent athlete and has the great luck of good genetics, which has rendered him on the taller and bigger side of his peers. He’s also a total bro, and football is about as bro as you can get. He immediately bonded with his teammates and embraced the entire football culture.

I bought myself and my three older kids t-shirts to wear to the games and we embraced our baby’s efforts. I even started to learn stuff (read: pay attention) about football, like “What’s Up With the Punt?” and “That Yellow Flag Means Something Bad Happened.” I really started to care.

Fast forward to this year, he’s even started to get some varsity time as a sophomore, and it’s been exciting to watch him play under the lights. His sister came home from college last Friday night to see him play, and we monitored him on the sidelines, standing with his hands on his hips, helmet on, waiting to get in the game. Finally, my daughter noticed he wasn’t standing with the rest of the team. “Mom look,” she said, pointing to the field, “he’s in the game.”

He’s playing tight end, and we watched as he blocked the other team during a few plays, and then after another snap, we saw the quarterback draw the ball back and launch it into the air towards my son, who grabbed it and ran for the first down. As he was tackled by the other team, we heard the announcer say his name over the loudspeaker and my daughter and I looked at each other, she had tears brimming in her eyes, and we clapped and cheered. All the other players’ parents sitting around me stood to give me a high-five and I immediately got texts from friends further away in the stands, cheering for my son with lots of exclamation marks and emojis.

Our team ended up getting clobbered that night after a brilliant opening drive in the first quarter where we made an easy touchdown. The other team came back and scored and repeated that about four or five times, while we were thwarted at every attempt. We’re a public high school in an area where everyone sends their kids to private schools, so it’s a rag tag football team — kinda the Bad News Bears of football — playing a team who had a kid drafted as a sophomore by Notre Dame. An uneven match, at best.

But the thrill of watching my son’s catch and his run was what I left that game remembering, not the miserable score. I loved watching him, and his teammates, play with their whole heart.

I watched him all summer working towards that moment on the field. Heading off most mornings for 7:30am practices to lift in the weight room and work through plays on the school field under the hot summer sun in full pads and helmet. Earlier that summer, he’d been working out with his lacrosse team, going to crossfit two mornings a week at 7:30. He never complains. He never balks at going to a workout or a practice.

So of course, when he gets the chance, he’s going to give it his all, even if that means diving at another player and knocking his feet out from under him, and suffering a blow to the head, as had happened at this week’s JV game. Athletes sustain injuries when playing hard in any sport — I know a woman who’s daughter suffered from chronic pain after sustaining a concussion playing lacrosse and I’ve watched a boy fall hard on his head during a basketball game — but there’s lots of evidence that puts football at one of the worst for an athlete’s brain.

I knew all of the risks going in and still, I let him play. In fact, I strongly encouraged him to play football.

The day after the game where my son made his fateful catch, my college girl and I went into New York City to meet her sister to check out her new office in one of the new World Trade Center buildings and explore her new neighborhood. We ended up eating brunch at a restaurant in Le District, kind of the French answer to Eataly, and sat at a table along the water overlooking New Jersey across the river.

The girls split a carafe of white wine and we talked about my younger daughter’s classes this semester and reviewed my older girl’s new office digs (amazing), while picking at the salty fries that came with their burgers. Suddenly, my college girl stopped and said, “Oh my God, Annie! We didn’t even tell you about Nick’s catch!” and she recounted the whole play. How he easily caught the ball and ran along the sidelines to get the first down. And then how we heard his name announced over the loudspeaker, and how my younger daughter cried watching her little brother play so hard and well.

I looked up from the plate of fries and saw my older girl beginning to blubber over the news. “Stop it, “ she said, her face starting to mottle and tears welling in her big blue eyes, “now you’re making me cry.”

I told this story a few days later to the varsity football coach as we stood in the athletic trainer’s office after that JV game. As she assessed my son for a possible concussion, I told the coach about how proud we were of him. About how thrilling it was to watch him play.

In the end, our doctor determined he’d been mildly concussed from the hit, mostly due to a continuing headache he had the following day. He’s been taking it easy ever since and sitting out of practices, and will remain on the sidelines during this week’s game.

But next week, he’ll be back on the field, giving it his all. It’s really a brutal sport, all these big men charging at each other and trying to take each other down, while we all sit on the sidelines and cheer. And I’ve embraced and encouraged my son’s role as a gladiator in the game.

I hope it was the right decision.

Do you channel your inner Connie Britton and embrace your high schooler’s Friday Night Lights experience? Do you regret letting him play? I mean, I’m involved now, but would love to hear your thoughts in the comment section below.