I was cleaning the bathrooms this morning, you know, wiping up the 10-pounds of hair that accumulates on the floor in a matter of days and the gobs of toothpaste and bits of toast that no one seems able to remove from the sink after they spit, when I came upon the books stacked on the back of the kids’ toilet.

I’ve always been big on scattering reading material around the house in prime locations — near toilets and piled up on the kitchen table — just in case one of the kids has an urge to look at something that’s not moving on a screen. You know, actually read something, even if it’s People or Entertainment Weekly.

Usually when I’m cleaning, I’ll just pick up the stack of books sitting on the toilet tank and wipe under them and then put them back where they were. But today it occurred to me that it’s been the same assortment — joke books, something about insults and comebacks and a novel — for a pretty long time and I was fairly certain no one was looking at any of them while they were in there.

So I started to sift through the books to see what I should get rid of, maybe swap one or two out for something new and interesting, when I came across our old copy of “A Wrinkle in Time” that I discovered had been christened with some vulgar graffiti: 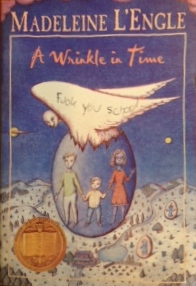 Someone in my house really seems to resent this book’s presence in our bathroom. 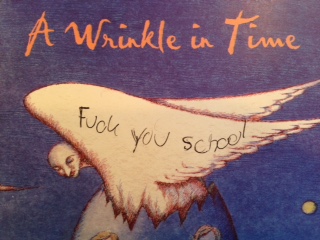 Who else senses a lot of anger here?

If this was 10 years ago, I guarantee you there’d have been a full-on inquisition into whose handiwork graced the cover of the book. But nowadays, there’s pretty much only one suspect, and while I get that middle schoolers experiment with naughty words and rebellious actions, I seriously didn’t think my kid had it in him.

Which only goes to remind me, for probably the umpteenth time since I became a mom 22 years ago, that you can NEVER SAY NEVER.

My kids have done things that have shocked the shit out of me and taught me to NEVER judge someone else’s kid because you just don’t know when it’s going to be your turn to find out that your super-sweet and loving and adorable 12yo would scribble “FUCK YOU SCHOOL” on a book.

I am, however, going to have a little fun later when he gets home from school to see who he’s going to say did the naughty deed. I only hope he tries to pin it on the cat.

7 thoughts on “Even the Best Kids Sometimes Do Bad Things”