So, I was texting with a gentleman about our upcoming second date (I know), when the following conversation occurred with my 17-year-old daughter:

Me (looking down at iPhone): “Dude, do you think it’s too soon?”

Teenager: “Mom, are you crazy? It totally is.”

Me: “I know, you’re probably right. I just really want to.”

Teenager: “He’s gonna think you’re a total weirdo. Do you want that?”

Me: “But he’ll never even begin to know who I am if he doesn’t know how much I love it.”

Teenager: “You really are a weirdo.”

And she’s right, I suppose. Some things – like sex, farting and second dates – really do need to be eased into. It’s common sense. But I was surprised to learn that I had to hold the phone on my liberal use of emojis when texting potential suitors as well. Apparently, it signals weirdness. A definite no-no in the dating world, according to my daughter. The expert.

But I love them, those little cartoon-y images you can insert into your text using an iPad and iPhone. They are, like, magic.

Emojis say it all.

I didn’t know what they were at first. The first time I saw one was in a text from my oldest son a few years ago. He had run into a McDonald’s somewhere in Maryland to use the restroom on our drive down to his college and he sent me a text from inside containing a smiling little pile of poo. Simultaneously cute and disgusting but talk about a picture being worth a thousand words. “Say no more,” I responded. 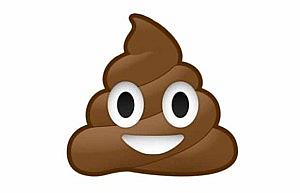 Then, I started getting texts from all my kids that included happy cartoon-y faces with heart eyes or hands clasped in prayer. Finally, one of my girls hooked me up with emojis of my own and my life hasn’t been the same since.

First of all, why go to the effort to type in “Ok” or “LOL” when you can just tap in a picture of a thumbs up or happy face? And it’s way easier than the couple of keys needed to create those more old-fashioned emoticons. 🙂 It suits my lazy nature but it’s also pretty efficient.

When I was a kid, I loved the book “Cheaper By The Dozen” and checked it out all the time from the tiny library in my Catholic school. Unlike the movie starring Steve Martin as the father to a brood of 12 children, the book focused on how the parents used time management strategies to juggle the chaos of all those kids, like teaching everyone Morse code. Emojis are like the Morse code of texting.

And I’m not alone in my love for sprinkling cartoons into my communiques. Recently, even CBS Sunday Morning’s Mo Rocca profiled the origins of the emoticon and featured one 20-something woman who uses emojis constantly but admitted that her dad’s enthusiastic embrace of them is just “weird.”

I also think a lot gets lost in translation when you’re texting with someone, and so I use emojis to soften the message. Like, “pls clean ur room” sent to a child is always accompanied by a smiling emoji to convey how happy this Herculean task will make her mom. Or, I plug in a big red heart into a text reminding my son to drive safely home from school, reminding him how much his mother loves him and hopefully sending the subliminal message that if anything bad happened, my big, red heart would surely break.

The only person this approach doesn’t seem to work on is my ex-husband. I used to send him the thumbs up all the time as an affirmative to texts he sent, but he began to take umbrage, thinking I was sending him the middle finger instead.

“Dude,” I said to him later, “I’m obsessed with emojis and am just giving you the okay sign.”

“I can’t really see anything without my glasses,” he confessed, making me wonder why he would just assume the worst in the first place. Sigh.

Anyway, I’ll continue to ease this new guy into my love for emojis. So far, I’m just keeping it to the smiley face. It’s way too soon for cats and crazy eyes. 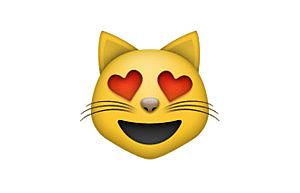 Am partial to the cats.

We were texting again last night and I used a few and he told me he didn’t have emojis.

I texted back, “That’s sad. I’ll hook u up. Will make ur life way better.”

And it will. There’s something very pleasing about finding just the right image to communicate an emotion, like a hypodermic needle for something painful — like having to drive a long distance — or a long row of wine glasses for a group chat with your lady friends. He’ll figure it out.

I’ll have his texts looking like a 12-year-old-girl’s in no time. 😉