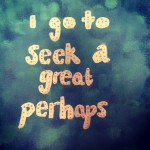 Sometimes I think I should have turned to screenwriting, rather than blogging as a creative outlet, because I tend to see things in cinematic terms. In my mind, I’m always composing the (improbably cheesy) Lifetime movie based upon, of course, The Life of Amy.

Like one morning last spring I was jogging up a hill  listening to the very end of The Beatles’ “I Want You (She’s So Heavy)” on my iPod.  You know it’s the song on Abbey Road that you imagine must have been inspired by major hallucinegens because it’s a lumbering loop with a psychedelic-synthesizer laid on top of it and it builds in intensity just like my climb. Just when you think it will never end, it suddenly breaks, and there’s a beat of silence, and then the plucky first chords that begin “Here Comes the Sun” start to trill right as I reached the top of the long hill.

It was so epically heavy and then light and free and made me think of my struggles, not just the hard work trying to get to the top of the freaking hill, but the hill as a metaphor for all that I’ve had to overcome over the last few years: the divorce, dealing with angry teenagers, going back to work full-time, becoming the gal I really want to be.

I imagine how I’d use that moment in my Lifetime movie, maybe it’s towards the end and I’ve had all the attendant struggles and made my way through and as I’m slogging up that hill, the Beatles pounding in the background, I hit the top and we do a quick cut to something super-happy as “Here Comes the Sun” skips in. And this is going to sound so cheesy but in my make-believe story, sometimes that scene is a wedding, like it’s some Shakespearean comedy or something and we’ve just emerged from the woods.

Poetic license, for sure.

But whatever that scene is, it represents the proverbial light at the end of the tunnel.

There have been plenty of other scenes looping through my head over the last four years as I’ve moved from an unhappy and unsure wife and mother to someone who knows who she is and what she wants.

In my movie, there would definitely be that scene when the checkout guy at Trader Joe’s asked for my phone number while bagging my humus (guess that’s not all he wanted to bag, ba dum tss).

Of course there would be a scene or two showing the truly low points of my life, like a blow out with one of the kids or the super-sad scene of my ex-husband and I standing in front of a judge in a dreary courtroom on a hot July afternoon and swearing before God and our very expensive attorneys that we no longer wished to be married.

And then later, we’d see how I pulled into my driveway and sat in the car and cried.

Sometimes the movie takes a turn towards the macabre, like when I’m looking around at all my fellow plane passengers pre-flight and imagine we’re all going down in a fiery crash, a la Lost or Airport 1975.

But sometimes I need to help my movie along a little and have to plan some real-life adventures from which to draw inspiration for upcoming scenes, which is what I’m about to do.

One part Mama Mia, two parts Shirley Valentine and 10 cups Eat, Pray, Love (math’s not my thing, yo), my sojourn begins Friday when I take off for Greece for about nine days.

I can’t even tell you how ridiculous that sentence was to write. I can’t believe I’ve had the balls to pull this thing off.

So here’s the plan: I fly from Jersey to Toronto for a quick stop and then across the Atlantic (gulp) to Athens where I land Saturday morning. I will then hang out there for a few hours (worst part of trip) until I catch a flight to Samos, an island in the eastern Aegean Sea and the birthplace of the Greek philosopher and mathematician Pythagoras.

It’s there that I’ll meet up with my group of seven travelers who will climb aboard a 50-something foot yacht and sail around the Dodocanese Islands, off the coast of Turkey, for the week.

We’ll finish up the following Saturday morning and I’ll fly from Leros – population just under 8,000 – back to Athens where I’ll spend the rest of the day checking out the Acropolis and all the attendant sites and ruins. I catch a plane home the next day and arrive back in New York Sunday night.

I know, this all sounds fabulous. Who doesn’t dream of sailing the Greek islands? It’s the trip of a lifetime.

But I’ll let you in on a little secret: I am really not that intrepid. If I could just stay in my comfort zone, I’d probably spend my life going on spa vacations with girlfriends and taking the kids to Disney.

But I don’t want either the make-believe Amy or the real Amy to be that comfortable; because it’s only when we’re uncomfortable that we grow (or at least that’s what my therapist keeps telling me). My divorce sucked and all but, man, did I figure a lot of things out about myself.

And, who wants to watch a movie where nothing really happens?

So here’s my dilemma: My plan was to leave the laptop at home and take copious notes while away and blog about my experiences upon my return.

But recently, a number of friends/followers have suggested they’d enjoy more immediate updates.

So tell me, should I blog my adventures real-time or share when I get home? Or am I just imagining that my life is more interesting than it really is?

Either way, I can’t wait to find out what happens next in the movie.

Get new posts delivered straight to your inbox by filling out the “Subscribe to Blog Via Email” button to the right (fancy, I know).