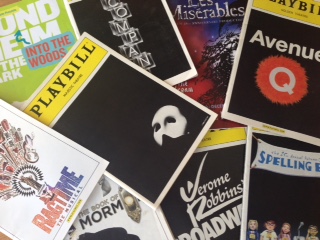 Here’s something I might not have mentioned about myself that may or may not change the way you feel about me: I heart show tunes.

I love the razzle-dazzle of musicals. I’ve driven alone in my car swooning to the ebbs and flows of The Phantom of the Opera’s “Music of the Night” and have used the original cast recording of Rent to help offset the pain of root canal as the music blared through my headphones to drown out the noise of the drill.

I know. Normal people would be rocking out to “Crazy in Love,” not “Seasons of Love.”

I grew up with parents who didn’t listen to music much – let alone rock n’ roll. My mom was more of a Burt Bacharach/Liza Minnelli kind of gal and weekly Saturday night dinners at my grandparents’ usually included some Edith Piaf or Engelbert Humperdinck playing on the turntable in the kitchen after the steak-and-potatoes meal.

Not exactly the coolest of singers when you’re a kid growing up in the 70s.

But while my mom never tuned into the rock n’ roll stations on our car radio and her record collection consisted of stuff like the Carpenters (not that I didn’t rock “We’ve Only Just Begun” and “Top of the World” while singing along to the lyrics printed inside the album) and Herb Alpert (whose album cover of the girl in whipped cream I spent a lot of time studying), she did introduce me to the magic of show tunes.

I would spend hours, holed up in my dormered pink-and-green bedroom, performing numbers I’d choreographed after memorizing all the words on original cast recordings from A Chorus Line or Godspell that my mom had fed to me.

My mother was pretty strict back then – like, we wouldn’t even consider rolling our eyes at her, let alone use a four-letter word in her presence – so it was kind of surprisinging she’d endorse something as racy as A Chorus Line, but I went along with it. I merrily strutted my 11-year-old stuff across my green-and-white shag rug and sang about “tits and ass” (courtesy of the Chorus Line song “Dance: 10, Looks: 3″) and prepared for my life on stage. I even practiced being interviewed on The Mike Douglas Show while sitting cross legged on the edge of my bed.

And while I didn’t see my first Broadway show until my mom took me to see Yul Brenner reprise his role in The King and I when I was 12, we’ve more than made up for lost time. She and I sat in the front row to watch Mandy Patinkin and Bernadette Peters kill it in Sunday in the Park With George on my 18th birthday (my introduction to Stephen Sondheim) and she bought me tickets to see The Phantom of the Opera with my boyfriend when I turned 22.

Over the years, my mom and I have seen countless shows together. We saw Alan Cumming as the creepy Emcee in Cabaret at Studio 54 and a revival of Oklahoma! where the corn stalks and bright blue sky seemed to stretch for miles across the Gershwin Theater stage. At the sumptuous revival of South Pacific we went to see at Lincoln Center, I stood online for the ladies’ room in front of Anjelica Huston during intermission, which almost rivaled the wow-factor of the show’s sweeping overture and “Bali H’ai.” And my mom and I sat mesmerized by the 2006 production of Sondheim’s Company in which all of the actors in the show not only sang and danced but also played a musical instrument. But more powerful to me than the sheer talent onstage was the truth of the lyrics they sang about love and marriage as I sat in the dark and contemplated the demise of my own at home.

My mom and I don’t see eye-to-eye on politics and certain conversations between us seem loaded with philosophical minefields, so the theater is safe territory for us because we both love the arts. We speak that same language. My mother introduced me to Broadway and books and movies and PBS – -pretty much my main ingredients – and it’s an appreciation I’ve tried to foster in my own children.

I, too, resisted playing the usual crap you hear on the radio – Rhianna’s S&M or Katy Perry kissing a girl – when the kids were younger and instead filled our car with the soundtracks from shows like Oklahoma!, The Music Man and Peter Pan. We’d drive back and forth from CCD and the grocery store singing “Surrey With the Fringe On Top” and “Seventy-six Trombones.” The only time it seemed kind of weird was when one of the kids had a friend in the car and I watched that kid’s face in the rearview mirror reacting to all of us singing about the Wells Fargo Wagon. You could tell he couldn’t get out of the car fast enough when we got to our destination.

And of course, I started taking my own kids to see musicals when they were pretty young, with varying results. My older son yawned his way through The Music Man and The Sound of Music on Broadway when he was young but I gave it one more shot and took him to see The Book of Mormon – just the two of us – the summer after he graduated from high school. We ate hamburgers at a Theater Row restaurant before the matinee and then sat together in the darkened theater and giggled at the wildly inappropriate singing and dancing onstage and I gave quiet thanks to Matt Stone and Trey Parker for finding a way to bring a mom and her teenage son together — happily — in a Broadway theater.

I was thrilled when I overheard my two daughters belt out “Popular” along with Kristin Chenoweth on the Wicked CD, which played constantly on the girls’  boom box down in our basement after we saw the show. And when I took the girls to see a revival of Into the Woods in 2002 – after I’d seen it with my own mother when it debuted a decade earlier – the two were perched on the edge of their seats in the balcony watching Cinderella get stuck on the steps of the palace on the stage below.

So when I read that Into the Woods was one of the free Shakespeare in the Park productions in New York a couple of summers ago, we made plans with friends to attend. The five of us showed up in Central Park at the crack of dawn one August morning and sat for hours on a long line that stretched along a pathway littered with picnic blankets and hundreds of dozing theater lovers waiting to see Amy Adams sing the part of the Baker’s Wife later that night at the Delacorte Theater.

And it was magic.

When news came that a movie version of the show was coming out this Christmas starring our favorite Pitch Perfect girl, Anna Kendrick, and the super-dreamy Chris Pine, my girls and I kind of lost our minds. Would it be as good as the stage production? Would it include all the songs we loved? Could Emily Blunt really sing?

So far, the girls and I have seen the movie together twice – once with my mom, two sisters and 5-year-old niece and the second time with our Shakespeare in the Park pals and I’m happy to report: It’s amazeballs. Both times I’ve sat next to my oldest daughter and we’ve nudged elbows every time something we loved happened onscreen, like when the Witch sang about staying a child “while you can be a child,” or when the two Prince Charmings ripped open their shirts during the hilarious “Agony” (Attention Chris Pine: I would like to report anecdotally that your crossover appeal is huge as you make both the under-25 and close-to-50 lady sets hot under the collar).

And when Little Red Riding Hood sang about all the things she learned after her run in with the Big Bad Wolf in the song “I Know Things Now,” my daughter and I turned to each other in the dark to sing the last two lines of the song – which are probably some of my favorite lines from the show: “Isn’t it nice to know a lot? And a little bit not.”

Earlier that day, she and I were doing some post-Christmas shopping at a local mall and I was torturing her – as I was informed – by forcing her to listen along as we drove to Jonathan Schwartz’s weekend music show, which my local public radio station plays at noon on Sundays. It’s an eclectic mix of music filled with showtunes and Sinatra – Schwartz is crazy for Nelson Riddle arrangements – and not really the stuff my 20-year-old daughter makes playlists out of on Spotify. But we were both excited when he played a medley of Into the Woods songs performed by some orchestra and as we pulled into our parking spot, Schwartz began to introduce his next selections, which were the final two songs from from the original cast recording of the 1987 Broadway show.

And so we did. We sat in our car side by side and listened to Bernadette Peters as the original Witch lament how “Children Should Listen” and the ensemble sing about “happy ever after” in their final run through the woods.

And as we listened to those final moments of the songs, both of us knew that the show did not end when the music stopped but rather when Cinderella sang – one last time – “I wish!”

We opened the doors and stepped out into the cold January afternoon and walked through the parking lot, laughing about what nerds we were. And I thought how lucky I was to have someone who would want to do that with me, sit in a car and listen to show tunes recorded 30 years earlier. Someone who spoke that same language. And I knew that even if, God forbid, she grew up to be a Fox News lover and eschew The New York Times, there would always be plenty of safe territory for us to meet. And maybe sing.

7 thoughts on “Don’t Make Me Use My Jazz Hands”