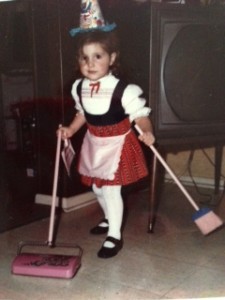 Getting a head start on my future career.

Here’s another exciting fun fact I learned about myself the other day, something I think we can add to the list of interesting tidbits we already know about me, which include my oft-noted thin ankles (dudes, it’s the only naturally small part of my body) and that I am a skilled armpit farter (truly, another gift).

It turns out, ladies and gentlemen, that I also happen to be a dislocated worker.

I learned this nifty item about myself while filing our annual college aid applications this week. You know, those onerous forms that ask questions cooked up by the government like: what was the net worth of my business/investment farms and whether I’d received any free/reduced priced lunches the previous year.

So, I was plowing through the questions – a daunting task for any English major who’s adept at commas and spelling but struggles with counting – and then comes Question #84 on the FAFSA form: Is parent a dislocated worker?

I never really paid attention to that term when filling out the FAFSA before. I guess I thought it was asking me if I was, like, a migrant worker or perhaps a foreign national in need of special working papers. But that was back when I had a job and knew I was a lot of things at that time (overworked, undercompensated), but not dislocated. But unlike other years when I’ve jumped through all those financial aid hoops while working full time, this year I’m doing so unemployed.

And thus, it seems, dislocated.

The kind people at FAFSA describe a “dislocated worker” as such: “a displaced homemaker. A displaced homemaker is generally a person who previously provided unpaid services to the family (for example: a stay-at-home mom or dad), is no longer supported by the spouse, is unemployed or underemployed, and is having trouble finding or upgrading employment.”

I have never had my whole life summed up so succinctly in one sentence.

I’m actually moving towards my one-year anniversary of being dislocated. I had been worrying about a layoff at the beginning of last year but when the axe finally fell via a conference call in January, I mostly just felt relieved that I didn’t have to worry about late night meetings a few nights a week and working on the weekends. And most importantly, that perhaps I’d stop leaving my little guy in the wrong place at the wrong time because I had so many balls flying through the air. The kid was getting really tired of that.

And overall, it’s been a really nice year of dislocation. I’ve been much less distracted. I’ve gone back to cooking real meals (which include ingredients like faro and beets) and not just ordering takeout a few nights a week (although in the perfect world I’d eat pizza every day). And I can’t remember the last time my eye twitched from stress.

But most importantly, I think I’m giving the kids a lot less of a reason to discuss abandonment issues with a therapist someday. I’m around a lot more nowadays now that I’m underemployed and can be found on my couch most nights watching TV with a kid (“Fixer Upper” last night, yo, which we are obsessed with) or trying to read a book without falling asleep. I’ve scaled back from relying so heavily on the older kids to prepare meals and drive their little brother around. And maybe that’s good or maybe it’s not such a terrible thing for kids to help out around the house but for a while there, I really depended on them to keep this puppy of a family running while I was out playing Brenda Starr.

I was happy to reclaim the role of the mom in the house (a position that my 17yo daughter often tries to assume). And it’s a job I know well. For 18 years that was my primary function around here as a stay-at-home mom. The first time around, no one really valued what I did behind the scenes while they were off doing the real work. Folks took it for granted when they found clean towels in the linen closet or their favorite chocolate chip muffins in the pantry. Or that they could pick up and go golfing all day and someone would be around to watch the kids and make dinner.

But this second go-round as a full-time mom, I do feel a little more appreciated. And I appreciate it a lot more now, too. I appreciate the flexibility I’ve had over the last year, where I can pick up and go emergency bra shopping with a daughter at 1:00 on a Wednesday afternoon or spend the day sitting on the beach with my 11-year old and watch him ride wave-after-wave in on his boogie board. And when he asks if I can take him and a buddy to go kick a soccer ball around on some turf field in the next town, I don’t mind sitting in my car in the parking lot knitting and listening to NPR while they try to score goals off each other under a late December afternoon sky.

I’m happy to help a brother out.

I used to feel bad about being a stay-at-home-mom. I felt like I wasn’t living up to my potential. Or that I was just being lazy.

Being a mom takes years of practice.

But now I know that there is no easy answer for moms. Working full-time can be hard but rewarding and the same can be said for staying home. Finding something flexible that lets you balance raising your kids while nurturing your brain, that there is the tricky part. And this doesn’t even take into account the generating an income part of the equation.

I applied for a loan this week from my local bank to help pay for some home repairs that need to be addressed pronto, regardless of how much money is in my checking account. My sinking pool deck does not give a shit whether or not I can afford keeping the pool from collapsing. I chatted with the bank guy on the phone and gave him all my details and explained that up until last January I had been employed as a news editor.

Then he emailed me some of the paperwork I needed to sign and I noticed that in the space under “current employer” he’d typed: homemaker.

But unlike a few years ago, when I’d see that title on my tax return and feel kind of ashamed about the path I’d chosen in life, this time I shook my head and laughed.