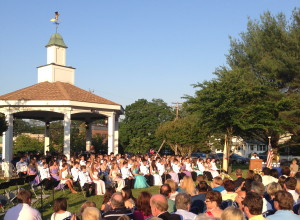 I ran out to the CVS in town around dinnertime last week to pick up some graduation cards and on the way home, I drove past the middle school and immediately began to cry.

Sloping up the school’s lawn, in front of the big white gazebo and under a perfect June sky, were the familiar blue plastic folding chairs that are hauled out of storage annually to set the stage for what has become one of my favorite nights of the year.

In short time, those seats would be filled by moms, dads, siblings and grandparents of the graduating eighth grade class. They’d be flanked by teachers, friends and well-wishers standing along the sides to witness yet another generation of kids move on from our school community. This year I even noticed one couple sitting off to the side in beach chairs like they were at a soccer game, just taking it in.

I went with two of my kids to cheer on our neighbor and we stood watching the graduates slowly walk in pairs from the red brick school across the lawn where they gathered in front of the gazebo.

We clapped and hooted for younger siblings of kids my older children had graduated with and we pointed out dresses we liked or how grown up some of the boys looked, all spiffy in their jackets and ties. Between the three of us, we knew who a lot of the kids were.

In our small town, which graduates around 85 kids a year, the graduation dress code dictates that the girls wear long white or pastel dresses and the boys wear white dinner jackets.

Before any of my own children had graduated, I thought the notion of little boys wearing rented tuxedos was ludicrous, and considered starting a campaign to change the dress code to a navy jacket and khakis.

But then my own son walked across the lawn looking smart in his fancy white jacket, joining the legion of young men who had graduated from our middle school and carrying on the tradition, and I was hooked.

Before the ceremony, they gather the kids together to take a photo of the graduating class lined up in front of the school, capturing one of the last moments of their childhood. That iconic picture will soon hang in the school’s hallway, just past the main entrance, joining a long line of graduating classes dating well over 50 years. Rows and rows of young girls with their hair just so and the boys with red roses pinned to their lapels have smiled for the camera.

So far three of my children have taken part in that tradition and their pictures are among the collection lining the school’s main entrance, where they will remain, frozen in time, with thousands of other children, many of whom eventually move back to town and continue the cycle with their own children.

And I’d like to be frozen too. I want to remain in that sweet slice of time.

So when my eyes filled with tears at the sight of all those blue chairs, it wasn’t for my children that I cried.

It was for me.

I cried because I don’t ever want this tradition to end for us. I want to spend one day every June feeling utterly entrenched in a community watching a beloved tradition unfold. I want to know who the girl is giving the speech or the boy who’s playing the piano and know exactly who their parents are and what street they live on.

I’ve loved raising my children in a small town and being immersed in my community. It’s been so satisfying being a part of something so much greater than me and taking part in so many traditions.

When my parents split up the summer between sixth and seventh grades, everything I knew, any traditions we had, came to a screeching halt. I left the tiny Catholic school that I had attended since first grade and we moved to anther part of the state and my mom got remarried. It was like the rug had been pulled out from under me and it took me years to regain my footing.

So when my own marriage came undone five years ago, I didn’t want our four children to feel as untethered as I had at 12. So utterly disconnected from everything I had known.

And for the most part, we kept it together. We stayed in our house and the kids still went to the same schools with the same friends and could count on third grade violin recitals and Civil War Day in the seventh grade.

I cried a second time earlier that day last week, when I went to the elementary school in town one last time to see my youngest child “graduate” from the fourth grade in anticipation of moving over to the middle school in September.

My two teenage daughters and their dad joined me for the ceremony that morning and the girls and I linked arms and walked down the school’s hallways to the gym one last time. I started to tear up at the sight of the artwork hanging along the walls and the little backpacks lined up outside the classroom doors and thought of the thousands of times I must have walked those halls over the last 15 years on my way to conferences or to help the kids celebrate a holiday or the end of school.

At the end of the ceremony, we all moved outside the school’s entrance to “clap” the class out. Another new tradition, the fourth grade walks through the school one last time en masse while the younger grades applaud as they file by.

My 16-year-old and I stood with the crowd waiting outside for the class to emerge and stared up at the school. We agreed it had been a great place for singing in countless concerts, dressing up like pilgrims or counting pumpkin seeds and making homemade applesauce, and she put her head on my shoulder and we cried that it was over.

“We had a good run,” I said and she nodded and we looked up to see the kids come out the front door and the crowd began to clap.