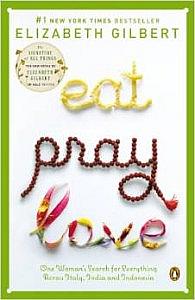 I guess I read Elizabeth Gilbert’s “Eat, Pray, Love” when it came out in 2006, along with every other woman of a certain age living in the United States.

I was turning 40, had been married about 16 years and spent my days as a stay-at-home mom with four kids living in New Jersey.

So my life at that point could not have been less like Gilbert’s, who famously wrote her memoir about her year-long journey to Italy, India and Indonesia to recover from her divorce and subsequent meltdown.

But I dutifully read it because that’s what I do, read the books that everyone is talking about. I mean, I even read “Anna Karenina” when Oprah said we should all read Tolstoy because I can’t stand letting pop culture pass me by. Or not doing what Oprah says.

At the time, I remember liking the book. I certainly didn’t take issue with the author for her existential crisis and search for herself. I definitely wasn’t as judgmental as a woman in my book club who declared during our discussion of the book that Gilbert was selfish. “If you’re a mother, then you know what life is all about,” she explained.

That line of reasoning — believing your way is the one true way — is really the cause of much suffering in this world.

Anyway, it’s not that I took issue with Gilbert’s journey; I just got kinda bored during the whole “pray” part at the Indian ashram and was in a rush to get to the good stuff in Bali.

But then things began to change in my life. Or, more specifically, I finally started making some changes.

Coincidentally, the movie version of “Eat, Pray, Love” came out on my 44th birthday and I made an event out of it. My sister-in-law and I took our teenage daughters out to get Tarot card readings and dinner and then we sat way up close in the theater (the only place to sit) to see the movie. I mostly remember loving the trailer for the movie more than the movie, which featured Florence and the Machine’s “Dog Days Are Over,” which I would totally use in the movie soundtrack of my life.

Anyway, while I was on my own, albeit more domestic, journey at that point, Gilbert’s story was still just that. A story with a really great ending. I mean, she ends up with Javier Bardim, for fuck’s sake. Oh. Wait. That part was pretend.

But sometimes, you just can’t see things clearly while you’re in the midst of them. You need distance to get the right perspective on things.

So recently, I was looking for an audiobook to listen to while I’m out and about. I’m okay with sitting in silence, too, but sometimes I am in the mood to listen to something other than my blabbermouth inner voice.

After an extensive search through, like, every audiobook on iTunes, I came across “Eat, Pray, Love” and, having just watched one of Gilbert’s Ted Talks, decided she would be a pleasant person to spend 13 hours listening to and downloaded the book.

Okay, I need you to stop reading this right now and go and download the book, too, so you can be as obsessed as I am with Liz Gilbert. I can’t tell you how much I love her and want to hang out with her.

And I don’t know if that it’s because I’ve done a bit of my own soul searching/navel gazing over the last few years and can relate more to Gilbert’s journey – I’ve now been known to chant — or it’s just that I love hearing her read to me, but I thoroughly relished listening to it. Even the ashram part.

Gilbert’s voice is so warm and full of personality. It’s like she can’t wait to tell you what happens next in her story. I especially loved hearing her speak Italian, describing how the sandwich maker called her “bella” each day and how Italians are masters of “bel far niente” (the beauty of doing nothing).

I listened while walking up a tree-lined path on a sunny spring afternoon as she ate pistachio gelato for breakfast in Rome. I knelt in the dirt and cut back the woody stems of the hydrangeas in my front yard, as Gilbert struggled with and then embrace her meditation practice. And I drove down the New York State Thruway under a clear blue sky while she described just how thoroughly she was adored and loved by her Brazilian lover in Bali. She may have even used the words “unpeeled, revealed, unfurled and hurled” to describe the situation.

I pulled into my driveway yesterday afternoon after a trip to the orthodontist and some errands, and sat in the car as my daughter brought in the Trader Joe’s bags and listened as Gilbert read the final lines of her book. She described how she and her lover carefully got out of the little fishing boat they’d been sitting in, moored off the coast of a remote Balinese island, and as they did, she turned to him and said in Italian, “Attraversiamo.”

And it killed me. It had me so teary and swooning, I had to go back and listen to her read those last lines three more times, just sitting there in my car alone pressing the rewind button.

Because while in Italian, “attraversiamo” is used for useful tasks, like crossing the street, it can also be applied to larger concepts, like moving from one stage of your life to the next.

And I think what resonated for me is that I have, indeed, crossed over. I have moved to a place where I no longer define myself by my divorce. I stand in a place where it’s no longer strange to go places by myself, like dinners and vacations. And most importantly, I have sailed to a place where I know I am ready to open my heart to somebody new. I’m no longer afraid of taking that risk.

Because, as Gilbert so eloquently writes:

“Happiness is the consequence of personal effort. You fight for it, strive for it, insist upon it, and sometimes even travel around the world looking for it. You have to participate relentlessly in the manifestations of your own blessings. And once you have achieved a state of happiness, you must never become lax about maintaining it. You must make a mighty effort to keep swimming upward into that happiness forever, to stay afloat on top of it.”

I’ve recently spent some time with someone who’s in the thick of a divorce and it’s been a reminder of how far I’ve come. It’s shown me what a big mountain of grief that puppy was to climb.

I have been on a journey, too, even though it’s pretty much happened right here in suburban New Jersey. I’ve come so far personally — traveled so far from the girl I used to be and closer to the one I intend to be — that my imaginary life passport should be filled with stamps by now.

All that’s missing is the Brazilian lover.

16 thoughts on “Crossing Over”