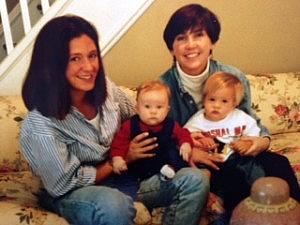 Here we are in the fall of 1993 holding each other’s baby and thinking we could take on at least five more kids apiece. #ignoranceisbliss

My friend Tara, who lives in Connecticut, and I have shared many of the same life experiences.

We both fell in love with boys at a certain military academy and the four of us found we had lots of fun, perhaps too much fun, together.

We attended each other’s weddings not long after college and then the babies started to come.

We had our first babies within months of each other and got together when those babies were old enough that at least I was already pregnant again with my second child.

We strolled the babies down to a nearby playground and pushed them on swings and talked about our plans for the future.

“I’d like to have at least four,” she said of the body count she had in mind for her family, and then reconsidered. “Maybe six.”

I nodded my head and said I’d been thinking I’d like to have that many children, too.

Clearly, we were so delusional we thought that having six children would be as easy as having a single one-year-old. Taking care of a one-year-old is like having a three-year-old dog except with the diapers.

How were we supposed to know then the challenges that would come with having multiple children, like the endlessness of two kids in diapers, temper tantrums in stereo and everyone crying and drooling because of Coxsackie sores?

I can’t even get started on the joys of owning multiple teenagers which makes a strong case for tubal ligation.

In the end, cooler heads (and husbands) prevailed and we both held steady at four kids apiece and are now both down to just two living at home with the other off at college.

In the early days, our husbands worked for the same Russian shipping operation in Manhattan and we’d see each other annually at the company Christmas party at which it always seemed one of us was either pregnant or breastfeeding and way too sober for the crazy antics going on around us.

A dozen years later, it seems that Tara and I both are going through another one of life’s obstacles together: The Midlife Muffintop.

She emailed me this video yesterday (which she needs you to know is NOT of her) and I laughed at the mom’s rap about her struggle with her bulging middle and took comfort when I saw hers that at least mine might be categorized as a mini-muffin.

It’s a fascinating mid-life phenomenon, this slowing down of the metabolism and carb bloating, and one of those things people fail to mention so that you can anticipate, like the trauma of pooping after you have a baby.

Anyway, I take comfort that I’m not alone on my journey through love, babies and muffin tops.

9 thoughts on “Bounce Your Muffintop”