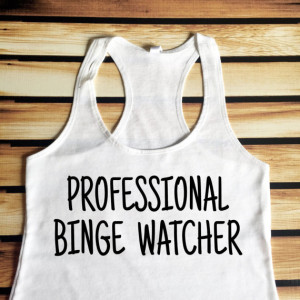 If you were wondering where I’d been lately and considering sending out a search party, you wouldn’t have to look too far. Throughout the holidays and now for hours each night after dinner, I’ve been sitting on the giant red couch in my family room watching the telly. In fact, I was watching so much TV after Christmas my children became alarmed.

“You’re STILL watching television?” my 23yo son said incredulously when he peeked his head out of the kitchen on Dec. 26 to find me sitting on the couch in my pajamas mid-day powering through my fourth hour of Netflix.

I have to admit, I found this reaction to seeing me do what he – and all of his siblings – do all the time quite hilarious. Throughout the fall, when he wasn’t networking or going on job interviews, the guy was sitting in my basement ploughing through, like, a million shows and yelling at the television while playing PlayStation4. My youngest daughter watched all five seasons of Mad Men during her winter break and my 13yo somehow squeezed in an entire season of Parks and Rec on Sunday while was supposed to be scraping stickers off his bedroom door.

But apparently they are not used to seeing their mom do the same. I guess it was weird to see me bingeing on a TV show. But, like a big box of CheezIts, it was hard to stop after just one helping of Jessica Jones. As each episode ended and the little box in the corner came on indicating the next was about to start in three … two … one … I was like, “Okay, just one more.”

What is this Jessica Jones, you ask? Well, number one, it’s super-violent. Like, limb in a Vitamix, violent. There’s sex. Even, kind of, superhuman sex. And it’s very dark. Jessica is a private investigator who’s a rape survivor with some superhuman strength and gets through her days slugging whiskey (sometimes straight outta the bottle). She’s the chick who played Jesse’s druggie girlfriend on Breaking Bad who chokes on her own vomit (with the help of Walter White) in bed. So, I guess things have picked up for the actress a little in this new Netflix-original series because Jessica would kick Walter White’s ass for trying that shit. Please try to get to the end of the first episode and not immediately need to watch the next one. The ending is a doozy.

But things really get good when Jessica’s former captor and all-around-bad-boyfriend Kilgrave – played by the super-sexy David Tennant – comes on the scene in the third episode. He is so bad. Terrible. And funny and strangely likable. I couldn’t believe he was the same actor who played one of the lead detectives in Broadchurch (another series you can, and should, binge on Netflix).

I was sorry when I finished the final episode and despondent that there were no serious plans for a second season. Somehow, the series is linked to the other Marvel Comics-inspired Netflix series Daredevil, but I haven’t taken the plunge to watch that yet, frankly because I’ve been watching way too many other shows.

I’m embarrassed to tell you that I’ve watched these other series in the last month:

Maybe we’ll all give our screens a break and just listen to a story for a while.

If you need a break from bingeing, read me instead! Sign up to get all of my latest posts sent right to your inbox by typing your email into the box below. You can also follow me on Facebook and Twitter.